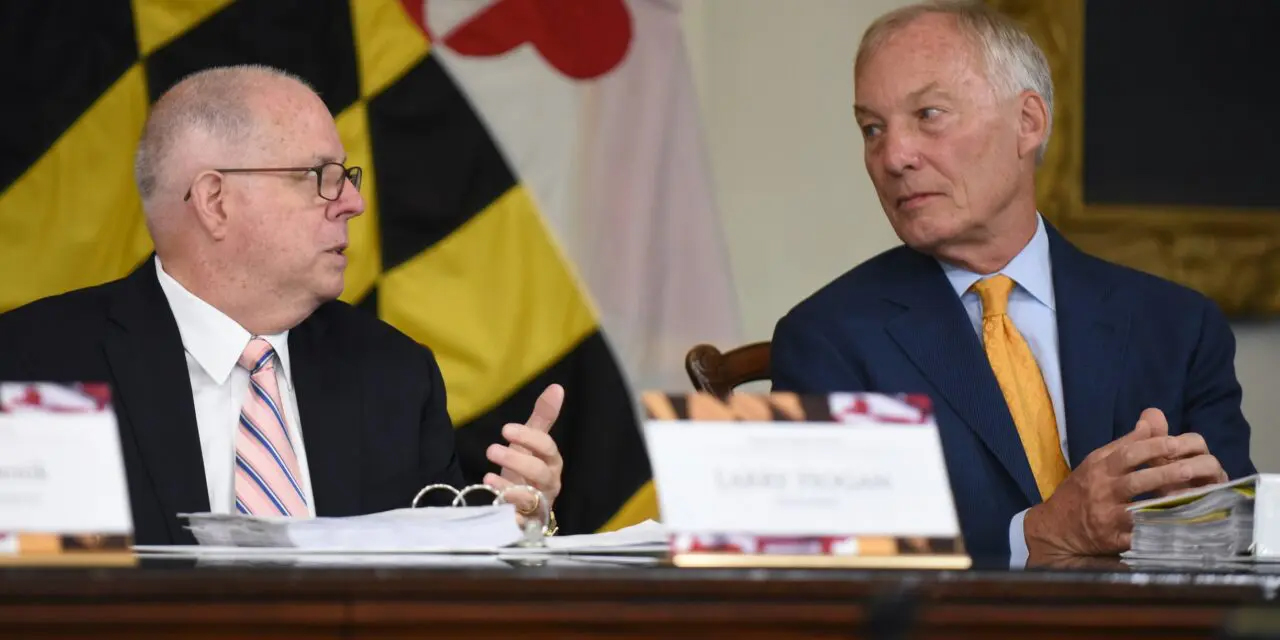 Comptroller Peter Franchot, right, is asking for a special legislative session to obtain temporary authority to pause the automatic gas tax hike. In this 2021 photo, he is seen with Gov. Larry Hogan. Governor's Office photo by Patrick Siebert.

STATUS SYMBOL: MARYLAND CONGRESSMEN BANNED FROM RUSSIA: Washington’s newest status symbol isn’t a seat at a coveted dinner party or an invitation to ride on Air Force One. Lawmakers from Maryland and other states were hoping Tuesday to spot their names on a different sort of list that similarly exudes political cachet. All eight members of the state’s U.S. House delegation appear among the 963 banned Americans, as do Democratic Sens. Ben Cardin and Chris Van Hollen on a list banning them from Russia. Jeff Barker/The Baltimore Sun.

PAYING MORE AT THE PUMP: Barring extraordinary action by the legislature and the governor, Maryland motorists will pay more at the pump in state fuel taxes. The 6.6-cent increase announced Monday by Comptroller Peter Franchot is the result of a 2013 law that all but guarantees automatic increases in the state portion of the gas tax. Bryan Sears/The Daily Record.

THOUSANDS OF UNVAXXED KIDS WORRY STATE HEALTH EXPERTS: There are thousands of children across Maryland who not only haven’t been vaccinated against COVID-19, but also lack protection from influenza and the kinds of diseases that routine shots long ago made scarce, such as measles and chickenpox. It’s a worrisome trend for public health experts, who see a surging number of children infected with the coronavirus and fear another outbreak in particular may be on the horizon — measles. Meredith Cohn/The Baltimore Sun. 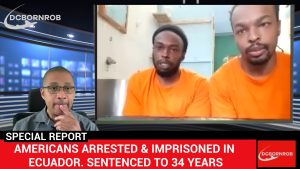 MARYLAND DAD WORKS TO FREE SONS FROM ECUADOR PRISONS: Ecuador is a second home for Montgomery County resident Robert Stephenson where he rents an apartment in the capital city of Quito and met with a member of parliament during his most recent visit which concluded last week. Over the last five years, Stephenson, 69, has made over 30 trips to the South American country, investing over $1 million.  He considers it the cost of doing business to save his two sons, both imprisoned there. Steve Monteiro and Jim Pettit/Maryland Reporter.

FINKSBURG MAN CHARGED IN JAN. 6 INSURRECTION: A Finksburg man is accused of throwing a flagpole and a smoke grenade at police and assaulting an Associated Press photographer during the Jan. 6 insurrection at the U.S. Capitol, according to court documents released Tuesday. Colleen Slevin/The Associated Press.

OPINION: PEREZ WOULD MAKE ‘OUTSTANDING GOVERNOR:’ Maryland’s Democratic gubernatorial primary is notable for its array of impressively credentialed candidates, including two former U.S. Cabinet secretaries; one who ran a major county; one who has held statewide office for nearly 16 years; and another who led a poverty-fighting philanthropy. Even in that distinguished field, the choice for us in the July 19 primary is clear: Tom Perez would make an outstanding governor. Editorial Board/The Washington Post.

SHALLECK TAKES DEBATE STAGE ALONE; PEROUTKA AWOL: Sometimes, when a candidate doesn’t show up for a political debate, the organizers leave an empty chair on the stage and let the opponent (or opponents) hold forth for the allotted time. James F. Shalleck wasn’t so lucky. Shalleck, one of two Republican candidates for state attorney general, was punctual for a virtual forum Tuesday night, sponsored by the League of Women Voters of Maryland, a host of other sponsors, and with Len Lazarick of Maryland Reporter as moderator. But his opponent, former Anne Arundel County Councilmember Michael Anthony Peroutka, was a no-show. Josh Kurtz/Maryland Matters.

800+ BA CO EMPLOYEES FAILED TO GET COLA RAISES: More than 800 Baltimore County employees did not receive cost-of-living raises they were due in January because of an “antiquated compensation system,” the county’s inspector general found. Alison Knezevich/The Baltimore Sun.

MO CO’s TOP COP: MORE GUNS FUEL VIOLENCE: Montgomery County Police Chief Marcus Jones said there are a variety of factors behind the number of homicides – 14 – that have occurred in the county so far in 2022. He’s worried about the increasing availability of guns to young people as well as planned meetings among youth on social media. And he also worries that many teens are trying to “handle” conflicts themselves, which can lead them to act out violently instead of calling authorities. Dan Schere/Bethesda Beat.