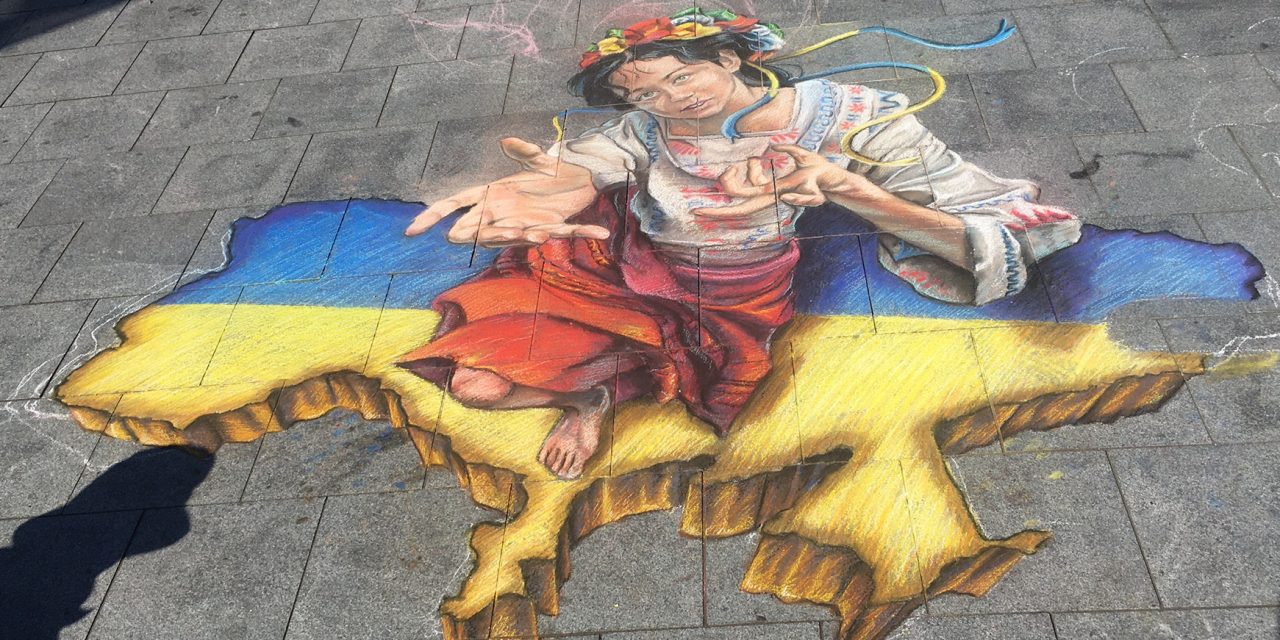 A chalk drawing of Ukraine on the plaza at the bottom of Broadway in Baltimore's Fells Point by "Mike" whose shadow appears in the lower left. MarylandReporter.com photo with Creative Commons License

SACKLER FAMILY TO PAY MORE IN OXYCOTIN SETTLEMENT APPEAL, GET CIVIL IMMUNITY: OxyContin maker Purdue Pharma reached a settlement Thursday over its role in the nation’s deadly opioid crisis that includes virtually all U.S. states and thousands of local governments, with the Sackler family members who own the company boosting their cash contribution to as much as $6 billion. Geoff Mulvihill and John Seewer of the Associated Press/Baltimore Sun

ETHICS COMMITTEE FINDS BREAK IN STANDARDS FOR SEN. REILLY: A General Assembly ethics committee found that Sen. Ed Reilly broke with the standards of the body when he told a constituent he was planning to pull a bill on which they both had worked because she donated to his opponent’s campaign. Dana Munro/Capital Gazette

COMMENTARY: PG CRIME TOO HIGH: In 2021, there were over 130 homicides in Prince George’s County—a number that the county has not seen in 15 years. In addition to the murders, last year saw a record rise in car jackings. Residents are scared, and it’s time to reflect on how we respond, with the link between poverty and crime in mind. Eve Shuman/Maryland Reporter

SENATE REC MARIJUANA BILL COULD BE SOONER TO IMPLEMENT: There was significant support Thursday for legislation legalizing recreational marijuana on July 1 without a voter referendum, faster than a leading House measure, during a state Senate hearing. Jeff Barker/Baltimore Sun

EXPLOSION IN MONTGOMERY LEAVES UNACCOUNTED, 10 IN HOSPITAL: Ten people have been taken to hospitals, several people are still unaccounted for, and three buildings have been declared unsafe with about a hundred displaced after an explosion, fire and apartment building collapse in Montgomery County, Maryland, Thursday morning. Rick Massimo/WTOP

RUSHERN WOULD DECLARE BMORE STATE OF EMERGENCY: The former executive of Prince George’s County is running for Governor of Maryland, and if elected is vowing to declare a state of emergency for Baltimore in order to address the City’s crime problem.  Gubernatorial Candidate Rushern Baker and Lt. Governor Candidate Nancy Navarro made the announcement outside the Northeast Market in Baltimore Thursday. Alexa Ashwell/WBFF

AG RACE INTERVIEWS: The next attorney general will take over what is essentially the largest law firm in Maryland, overseeing a staff of hundreds of lawyers who must represent the people and government of the state. The Maryland State Bar Association this week hosted one-hour interviews with the AG candidates. Madeleine O’Neill/The Daily Record

BILL TO GIVE VOTING RIGHTS TO STUDENTS: A proposed state law would give voting rights to student members of their local boards of education. Kate Ryan/WTOP

ASSISTED OUTPATIENT TREATMENT PROPOSED TO HELP WITH MENTAL HEALTH IN MD: A pilot program to help the “mental health pandemic” with assisted outpatient treatment ordered by the courts is being proposed by state lawmakers in Frederick County. Jack Hogan/Frederick News-Post

MISSING MINORITY WOMEN FACE DISPARITIES: Calling it a “crisis hiding in plain sight,” U.S. Rep. Jamie Raskin chaired a congressional panel hearing on Thursday that shared sobering statistics Thursday on the disproportionate number of Indigenous, Black and other minority women and girls who are being reported missing in the United States, saying more needs to be done to tackle the problem. Susan Montoya Bryan for Associated Press/Baltimore Sun

KEEFER WITHDRAWS DEL CANDIDACY, CITES FAMILY: A Washington County Commissioner has withdrawn his candidacy for state delegate a month ahead of the candidacy filing deadline. Wayne Keefer said he needed to be with his family after he and his wife experienced the loss of their second child during his wife’s pregnancy. Michael Garcia/The Herald-Mail

CARROLL WILL INCREASE TRASH BURIED IN LANDFILL: Carroll County commissioners decided Thursday to increase the amount of trash to be buried at the Northern Landfill to 27,000 tons in fiscal 2023, compared to the 12,500 tons that was included in the plan for fiscal 2022. County officials had planned to increase the amount to 55,000 tons next fiscal year, but staff determined that amount to be unfeasible. Madison Bateman/Carroll County Times

ANDY HARRIS ON UKRAINE: Rep. Andy Harris, R-1st, is one of the co-chairs of the Congressional Ukraine Caucus. His mother was an immigrant from Ukraine, and Harris has been active in support of the besieged country, while critical of President Biden’s approach.