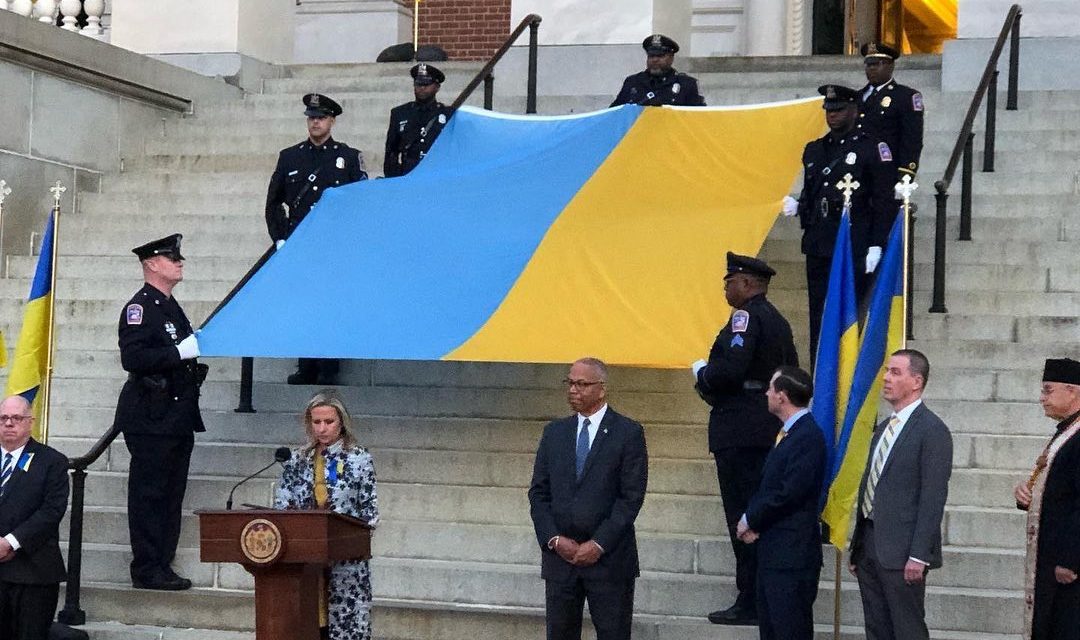 PACKAGE WOULD TIGHTEN STATE, LOCAL CYBERSECURITY: House leaders Wednesday vowed the state would take the initial steps in modernizing state and local government information technology systems, an effort that is not new or always easy to understand. Recent high-profile attacks on local government as well as a three-week shutdown of the state Health Department website has increased the level of concern. Bryan Sears/The Daily Record.

SOME POLICE BODY CAM FOOTAGE COULD BE WITHHELD: A bill that would alter how police body camera footage can be viewed by the public is nearing passage in the Maryland Senate. The bill, sponsored by Baltimore County Democrat Sen. Charles Sydnor, would prevent the public from viewing tape that depicts a victim of domestic violence, rape, or sexual assault, or depicts the death of a law enforcement officer in the line of duty. Callan Tansill-Suddath/WYPR-FM. 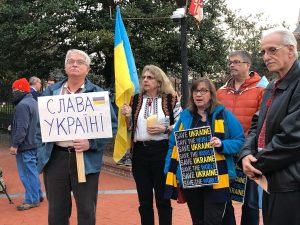 LAWMAKERS HOLD VIGIL FOR UKRAINE ON LAWYERS MALL: Gov. Larry Hogan and state lawmakers gathered on Lawyers Mall in Annapolis on Wednesday night to hold a vigil for Ukraine, which is under attack by Russia. The dome of the historic Maryland State House was colored with blue and yellow lights, the colors of Ukraine’s flag. Staff/The Associated Press. 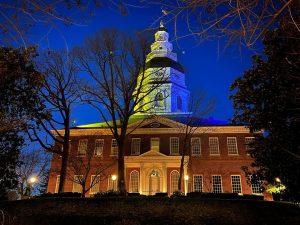 The State House is lit in the colors of the Ukrainian flag — sky blue and yellow. Photo by Sue Kopen Katcef.

ADVOCATES SEEK HEALTH INSURANCE AID FOR SMALL BIZ WORKERS: Public health advocates are pushing for a bill that would provide up to $45 million in subsidies each year for Maryland’s small businesses and nonprofits to provide their employees with health insurance.  Johanna Alonso/The Daily Record.

BILL WOULD LET TENANTS SHIELD PANDEMIC RELATED EVICTION NOTICES: Although courts were shut down due to the pandemic and limited federal and state protections were available to tenants facing eviction, new failure-to-pay rent evictions have been filed throughout the pandemic. State lawmakers are considering legislation to allow tenants to shield those filings from public view in cases that were filed between March 5, 2020 and Jan. 1, 2022. The narrowly tailored legislation applies specifically to cases where the failure to pay rent was due to a loss of income caused by the pandemic. Bennett Leckrone/Maryland Matters.

DAMAGE CAP WOULD BE LIFTED FOR SOME PET DEATHS, INJURIES: A proposal in the General Assembly would lift the cap on damages in lawsuits over a pet’s death or injury in certain circumstances, including when gross negligence or a constitutional violation occurred. The bill is in response to a 2021 ruling in Maryland’s Court of Appeals that limited the financial award in a case where an Anne Arundel County police officer fatally shot a dog. The court ruled that current law caps compensatory damages at $10,000 and does not allow for noneconomic damages for a pet owner’s pain and suffering. Madeleine O’Neill/The Daily Record.

POLITICAL NOTES: HOGAN’s DAUGHTER RUNNING FOR STATE’S ATTY: Jaymi Sterling, a former deputy state’s attorney in St. Mary’s County, announced Wednesday that she is challenging her ex-boss, six-term State’s Attorney Richard D. Fritz, in the upcoming Republican primary. She released a 30-second video in announcing her run. But nowhere in the ad — or on her campaign website — does Sterling mention that she is the step-daughter of Gov. Larry Hogan. Josh Kurtz and Bennett Leckrone/Maryland Matters.

CARROLL COVID RATE NOW CONSIDERED ‘LOW COMMUNITY LEVEL:’ As Carroll County’s COVID-19 case rates continue to decline, only one new death was attributed to the coronavirus this week in the county, according to the health department. The COVID-19 positivity rate reached 4.69% this week, and the county is considered by the Centers for Disease Control and Prevention to be at low COVID-19 community level. Molly Fellin Spence/Carroll County Times.