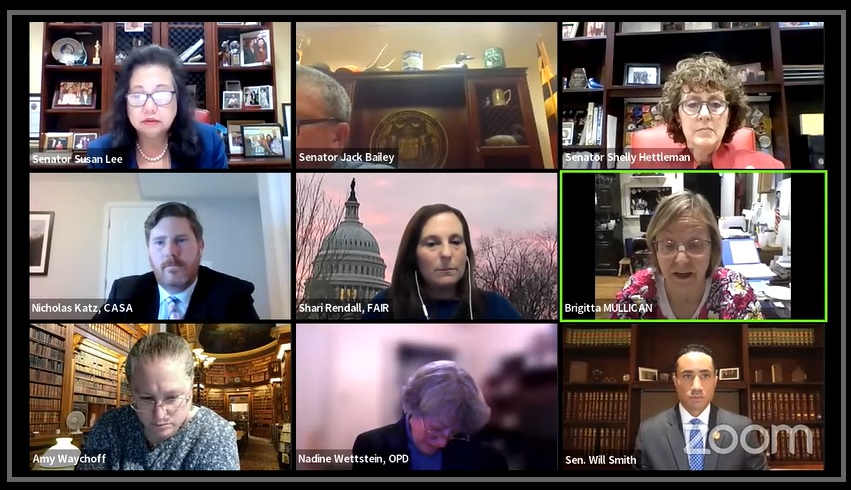 A screen shot of a Feb. 3 hearing of the Senate Judicial Proceedings Committee on a bill, SB129, to provide lawyers for immigrants in deportation actions. At the hearing, Chair Will Smith, lower right, cut off the mic of witness Brigitta Mullican, middle right, after he warned her to stop using the term "illegal alien."

By Stephen Neukam and E. A. Breeden

More than 100 Maryland organizations have called on the state Senate to continue live video testimony at committee hearings after the chamber’s leadership announced it would end the option Monday when the Senate transitions back to in-person meetings.

Primarily, the organizations said, people of color, immunocompromised individuals and workers whose schedules do not allow them time to attend meetings in Annapolis would have fewer opportunities to contribute.

The Senate and the House of Delegates have allowed remote testimony the last two sessions during the daily hearings due to concerns about COVID-19.

The House has maintained it will continue with remote meetings and hearings throughout the legislative session.

In a memorandum to the chamber, Senate President Bill Ferguson, D-Baltimore, said his decision to move to in-person hearings was based on improved pandemic metrics. The decision to exclude live video testimony was in part because of technical difficulties.

“Due to the logistical challenge of appropriately streaming in-person and Zoom testimony simultaneously, we will not be allowing hybrid testimony for bill hearings,” Ferguson’s memorandum said.

Ferguson said in “extraordinary circumstances,” committee chairs could choose to allow witnesses to send pre-recorded video testimony if they cannot testify in person.

But some, like Executive Director of Common Cause Maryland Joanne Antoine, said the Senate has not provided the means or guidance for witnesses to provide alternative video testimony.

“There is no guidance on the length of video testimony, nowhere to submit video on the website, and no guidelines for what circumstances would allow video testimony to be accepted,” Antoine told Capital News Service.  “If you’re not providing guidance on how to use these tools, then it’s just a line just to be there.”

Part of Ferguson’s decision is linked to a belief about the General Assembly that is separate from health or technology, according to a statement released by Schuhlein.

“From the beginning of the 2022 Legislative Session, the Senate President has believed that a core part of the democratic process is having the public in person when safe to do so,” he said. “Key health metrics are returning to pre-omicron levels, and as such, the Senate president is moving forward with the plan.”

Ferguson said publicly in January that if health conditions permitted, the Senate would transition back to in-person hearings.

But some organizations argue a return to the status quo excludes many constituents.

CASA de Maryland, an immigration advocacy organization, has had members and representatives provide virtual witness testimony at hearings this session.

“Pandemic or not, failure to extend a virtual option only excludes the voices that legislators need to hear the most,” said Cathryn Paul, government relations and public policy manager at CASA de Maryland. “Black and brown Marylanders are those who will be impacted the most. The Senate should be maximizing access, not limiting it.”

Nikki Tyree, executive director of the League of Women Voters of Maryland, said her conversation with Ferguson’s office earlier this week made clear that the chamber is “dug in” on its position to eliminate live virtual testimony.

“This move was deliberate,” Tyree said in an interview. “It shouldn’t be seen as anything other than closing the door on Marylanders.”

The Lower Shore Progressive Caucus was one of the groups calling on Ferguson to reverse course.

In a press release, LSPC Chairman Jared Schablein said: “Since taking over as Senate President, Senator Ferguson has always been fair and helpful to the Shore. That is why he must consider this decision with our experience in mind. Living on the Lower Eastern Shore of Maryland, we are two and half hours away from the General Assembly building, which means our residents must drive a minimum of five hours to go to Annapolis and back. Since most of the hearings happen during work hours, making in-person testimony possible for many residents on the Lower Shore is problematic. We need these virtual hearings to become permanent to ensure our voice in Annapolis is heard on important issues that affect us everyday.

Analysis: Is 2010 a year for greater transparency?