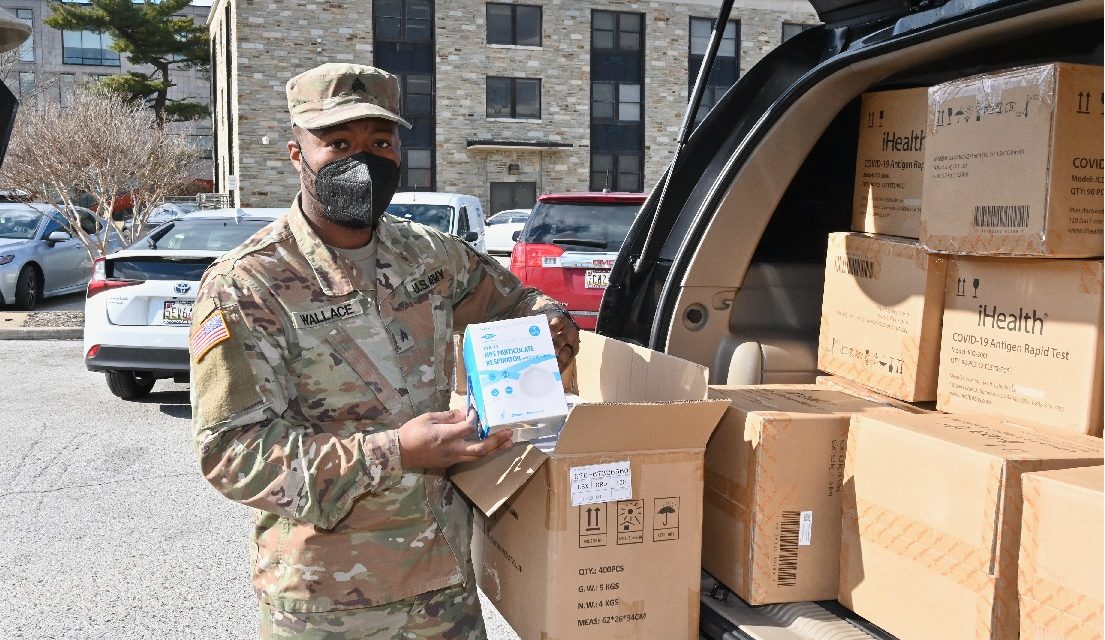 Even while the governor and Republican legislators were asking for an end to mask mandates in schools, members of the Maryland National Guard were delivering K95 masks and COVID-19 test kits to Morgan State University. Lt. Gov. Boyd Rutherford participated. Governor's Office photo by Joe Andrucyk

COMMENTARY: COX IS A CLOWN: Even for a clown like Cox, this is clownish behavior. What’s up with the timing of it? Brian Griffiths/The Duckpin

REDISTRICTING MAP IN COURT: Maryland’s new map of districts for state senators and delegates is headed to court, as a group aligned with Gov. Larry Hogan has charged the map violates the state constitution’s requirement that districts must be compact and respect natural boundaries. Pamela Wood and Bryn Stole/The Baltimore Sun

LAWMAKERS INTRODUCE CHILD CARE INDUSTRY HELP: Maryland lawmakers outlined a package of measures Thursday to support child care providers, who have struggled during the COVID-19 pandemic. In the past two years, more than 750 providers in Maryland have been forced to close, lawmakers said in a joint videoconference with delegates and senators. The package includes grants to attract and retain providers, as well as loans for capital expansions for facilities. Brian Witte/AP

FEDERAL DISASTER HELP FOR MD AUTOPSY BACKUP: The Federal Emergency Management Agency confirmed Thursday that a Disaster Mortuary Operation Response Teams expert will be deployed to help ease Maryland’s growing autopsy backlog, which is expected to grow up to 300 by next week. The backlog dates back to Dec. 2021, driven by staffing shortages and made worse by an increase in overdoses and homicides. Hannah Gaskill/Maryland Matters

ADMINISTRATION SQUARES OFF ON JUDICIDAL TRANSPARENCY: Gov. Larry Hogan’s administration squared off Thursday against the Maryland Judiciary and a law school dean over the governor’s call for judicial transparency legislation requiring a state commission to compile by name the sentences each Maryland circuit court judge renders for violent criminals. Steve Lash/The Daily Record

PUSH FOR ENVIRONMENTAL BILLS RESUMES: After sputtering late in last year’s General Assembly session, efforts to pass wide-ranging environmental legislation in Maryland have resumed — and lawmakers say they’re optimistic they can find common ground. Environmental bills include statewide targets for reducing greenhouse gas emissions, in addition to provisions that would require newly constructed buildings to avoid using fossil fuels for heating, and require the state to swap some of its vehicles for electric cars. Christine Condon/The Baltimore Sun

D.C. JOINS CITY EFFORTS TO STOP VIOLENCE: The District of Columbia has joined Baltimore and 12 other cities across the U.S. in a groundbreaking White House initiative to demonstrate the need for community-based violence intervention strategies to break the cycle of violent crime that has spiked during the COVID-19 Pandemic. Deborah Bailey/AFRO

GUBERNATORIAL CANDIDATE KING RELEASES PLAN FOR ECONOMIC OPPORTUNITY: In his bid to become Maryland’s next governor, former U.S. Education Secretary John B. King Jr. (D) and his running mate Michelle Siri are releasing a plan on how their administration would attempt to build economic opportunities for women — by prioritizing paid family leave, affordable child care and a higher minimum wage. Elizabeth Shwe/Maryland Matters

WHEN IS SPORTS BETTING COMING ONLINE? For the first time, betters can cash in on the Super Bowl after the state approved sports betting in Maryland. Now many want to know when betting will go online. Kelsey Kushner/WJZ

RESTAURANTS STILL SUFFERING: The ongoing challenges, and scarcity of government relief, have some industry watchers worried about what 2022 might bring for restaurants. Amanda Yeager/Baltimore Business Journal