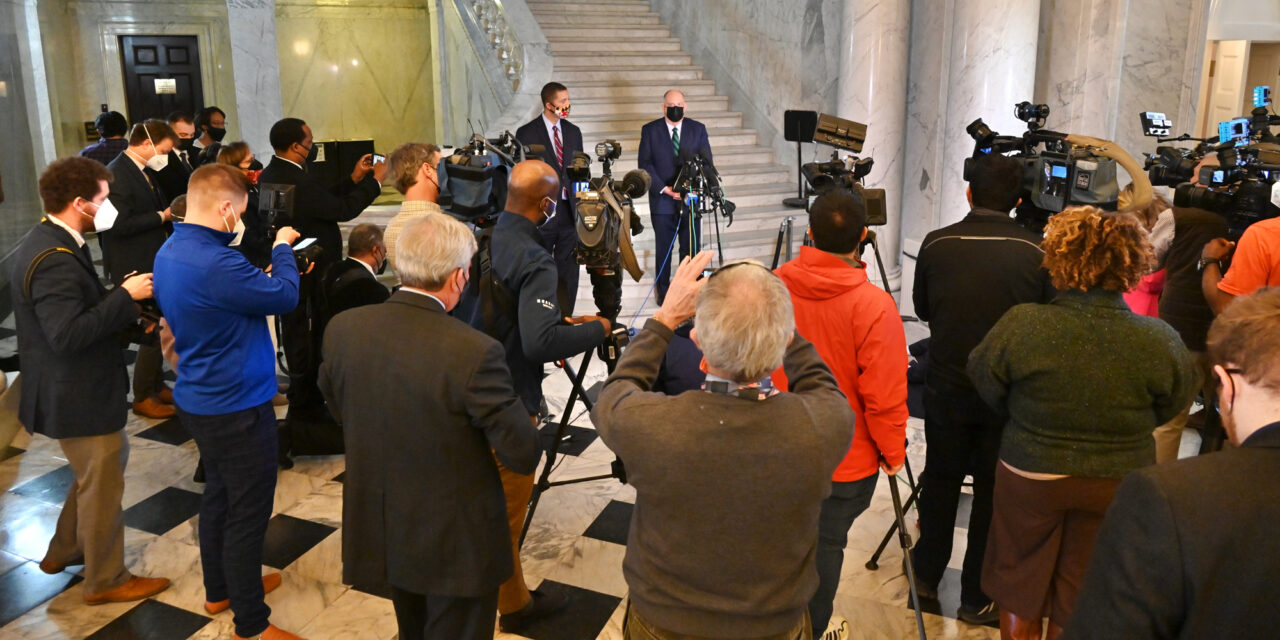 Gov. Hogan speaks with the press as the General Assembly opens for the 90-day session on Wednesday. Photo by Joe Andrucyk and Patrick Siebert of the Governor's Press Office.

PANDEMIC WEIGHS HEAVY AS LAWMAKERS RETURN TO ANNAPOLIS: State lawmakers returned Wednesday to Annapolis for their annual legislative session, with the coronavirus pandemic continuing to weigh on their minds and alter their procedures. Pamela Wood and Bryn Stole/The Baltimore Sun. 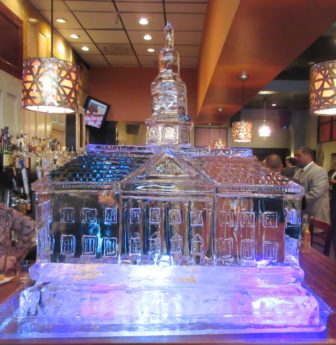 An ice sculpture of the State House at the Red Red Wine bar in Annapolis in January 2017. A lobbying firm paid for the sculpture. MarylandReporter.com file photo

ANALYSIS: LEGISLATURE MORE TRANSPARENT THAN EVER: The pandemic has prodded the Maryland General Assembly to make its actions more open and transparent than ever. This includes many steps that had been advocated for years by journalists and good government types. That doesn’t mean that this greater openness will make the lawmakers actions more palatable if you happen to disagree with them. But it may help you understand them. Len Lazarick/Maryland Reporter.

HAVE SOMETHING INTERESTING TO SAY? Maryland Reporter is looking to publish more commentary and analysis on issues about state government and politics from all points of view – left, center and right. If you have an opinion or analysis piece you’d like to see published, contact Len@MarylandReporter.com.

RECREATIONAL CANNABIS: Maryland lawmakers returned to Annapolis Wednesday to take on a number of issues, among them, the legalization of recreational cannabis. Last fall, a Goucher poll found that 60 percent of Marylanders favor legalizing marijuana. But the House and Senate are taking sharply different approaches. Joel McCord/WYPR-FM.

REPRODUCTIVE RIGHTS GROUP RETOOLS, REBRANDS: As reproductive rights advocates gear up for a push to strengthen Maryland’s abortion protections, a leading player in the legislative battle finds itself retooling some of its operations as the year begins. Josh Kurtz/Maryland Matters.

CLIMATE ACTIVISTS PUSH LAWMAKERS TO CUT POLLUTION: Six Maryland environment professors penned a letter to the presiding officers of the General Assembly this week, imploring them to commit to reducing climate pollution in Maryland by 60% below 2006 levels by 2030. Elizabeth Shwe and Josh Kurtz/Maryland Matters.

HOGAN NAMES TOLES TO REPLACE FORMER DEL. DAVIS: Gov. Larry Hogan appointed Karen Toles on Tuesday to the House of Delegates, one day before the 90-day legislative session began in Annapolis, taking over Dereck Davis’s seat as he became comptroller. Because Davis’s term expires this year, Toles will need to run for the seat in the June 28 primary. William Ford/The Washington Informer.

OPINION: AFRICAN-AMERICANS LINE UP TO SUPPORT PEREZ FOR GOV: In a column for The Afro, former Del. Salima Marriott writes about Tom Perez and why so many African-Americans have lined up to give early support Tom Perez’s bid for governor, including former Montgomery County Executive Ike Leggett. “Tom’s life’s work has been to get stuff done and fight for justice and jobs. Which is why he has early endorsements from African American leaders from across Baltimore City and  Maryland,” she writes.

DEM LAWYER RUNNING TO REPLACE SEN. REILLY: Dawn Gile, a lawyer who represents businesses of all sizes across the state in litigation, said she decided to run for the District 33 Maryland Senate seat as a Democrat when she saw the effects the COVID-19 pandemic was having on families. Gile is running against incumbent Republican state Sen. Ed Reilly and business owner Stacie MacDonald, also a Republican. Dana Munro/The Capital Gazette.

PROFILE: HEATHER HUNTER OF WMAL RADIO: When drive-time fans of WMAL’s O’Connor and Company tune in for their morning O’Connor fixes, they don’t directly hear the voice of one of the most important people in the studio: Heather Hunter, Larry O’Connor’s executive producer. Independent Women’s Forum

RASKIN’s BOOK HIT NO. 1 ON NYTIMES LIST: Maryland’s U.S. Rep. Jamie Raskin’s new book Unthinkable, in which he describes his experiences leading the impeachment effort against former President Donald Trump shortly after his son’s death by suicide and the Jan. 6, 2021 insurrection at the Capitol, has made it to No. 1 on the New York Times Best Seller list for nonfiction. 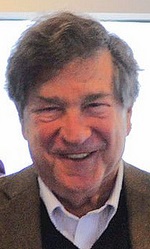