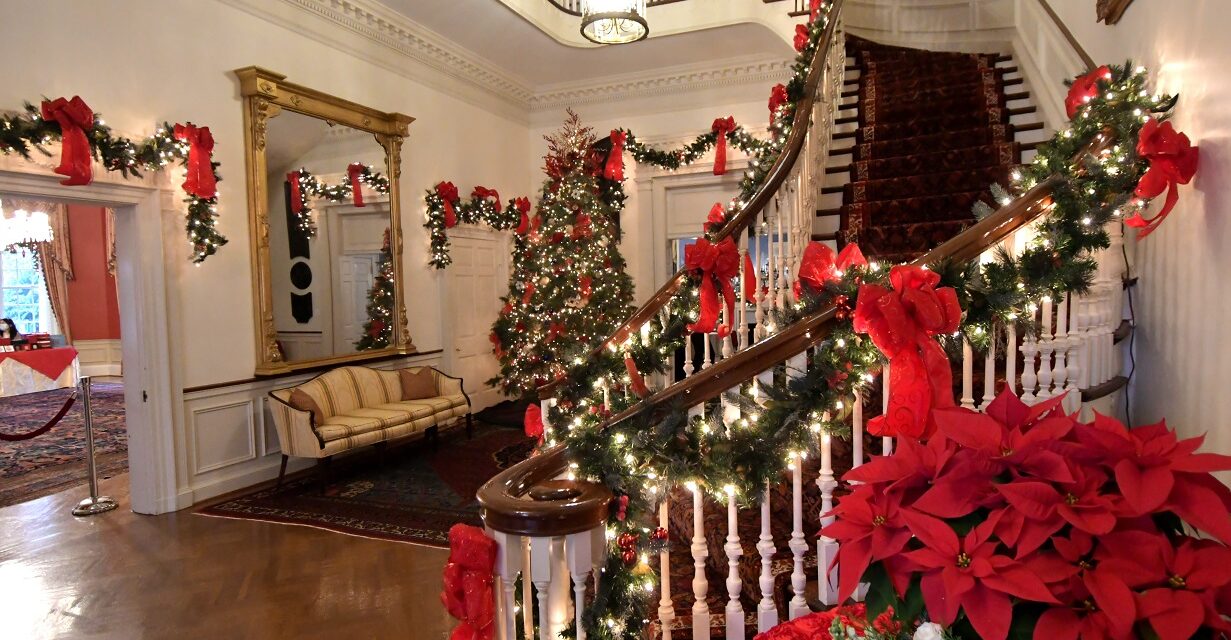 The main foyer of Government House, the public area of the governor's residence, decorated for Christmas. Governor's Office photo

STATE OFFERS $100M TO BEEF UP MEDICAL STAFFING AMID LATEST SURGE: The state will provide $100 million in emergency funding to help beef up staff at its hospitals and nursing homes, Gov. Larry Hogan said Tuesday. His remarks come just one day after he tested positive for COVID-19, and as the state’s positivity rate is approaching 12% and COVID-19 related hospitalizations have exceeded 1,300. Bryan Renbaum/Maryland Reporter.

COVID FILLS BEDS AT UPPER CHESAPEAKE MEDICAL: The University of Maryland Upper Chesapeake Medical Center is continuing to near its capacity amid the current COVID-19 surge. According to Harford County Executive Barry Glassman, there are 73 people hospitalized between its two hospitals in Bel Air and Havre de Grace (up from 60 last week), about 27 of which are in critical condition as of Tuesday. The majority of the patients are unvaccinated, he said. Jason Fontelieu/The Aegis.

JUVENILE JUSTICE REFORMERS HAVE HOPE IN UPCOMING SESSION: Supporters of juvenile justice reform in Maryland are hopeful the time has come to end the policy of automatically charging children as adults for certain crimes — a practice that many other states have changed in recent years. Brian Witte/The Associated Press.

MOSBY FIRES BACK AT HOGAN: Baltimore State’s Attorney Marilyn Mosby shot back at Larry Hogan on Tuesday with an open letter accusing the Maryland governor of “incessant dog-whistling attacks about Baltimore crime” and rebutting his criticisms that she’s lenient on violent criminals in the city. Tim Prudente/The Baltimore Sun.

NAT’L GUARD PITCHES IN TO VAXX FREDERICK: As Maryland marks its greatest number of new COVID-19 infections in a 24-hour period, members of the National Guard are inoculating Frederick County residents with the best defense against the virus. Mary Grace Keller/The Frederick News-Post.

NEUMAN TAKES STEPS TOWARD RUN FOR GOV: Laura Neuman, who served as a Republican county executive for Anne Arundel County, has set up a campaign account that could serve as a first step toward a run for governor as a Democrat. Pamela Wood/The Baltimore Sun.

MOORE REPLACES CAMPAIGN TREASURER: Maryland Democratic gubernatorial candidate Wes Moore has a new campaign treasurer, replacing the prior treasurer, who is embroiled in a labor dispute with workers at her bookstore chain. Pamela Wood/The Baltimore Sun.

COLUMN: FLANAGAN FORGES AHEAD FOR BALL’s EMAILS: Scott Ewart, in a column for his Scott E’s Blog, updates legal actions taken by Bob Flanagan against Howard County, under the Maryland Public Information Act. He had been seeking 497 emails being withheld based upon what Ewart says are “grossly inflated claim of privilege.” Ewart writes, “Now only six emails are being totally refused, although many redactions remain in dispute.”

SCHMOKE LEFT POLITICS BEHIND: Former Baltimore City Mayor Kurt Schmoke doesn’t care to dwell on his past in politics. The city’s first elected Black mayor didn’t hang on to the framed map marking the locations of completed projects that colleagues presented him on his last day in office. And when Schmoke thinks of the moments in his life that he would handle differently, it’s the tie games and losses from his notable athletics career that come to mind. Lillian Reed/The Baltimore Sun.