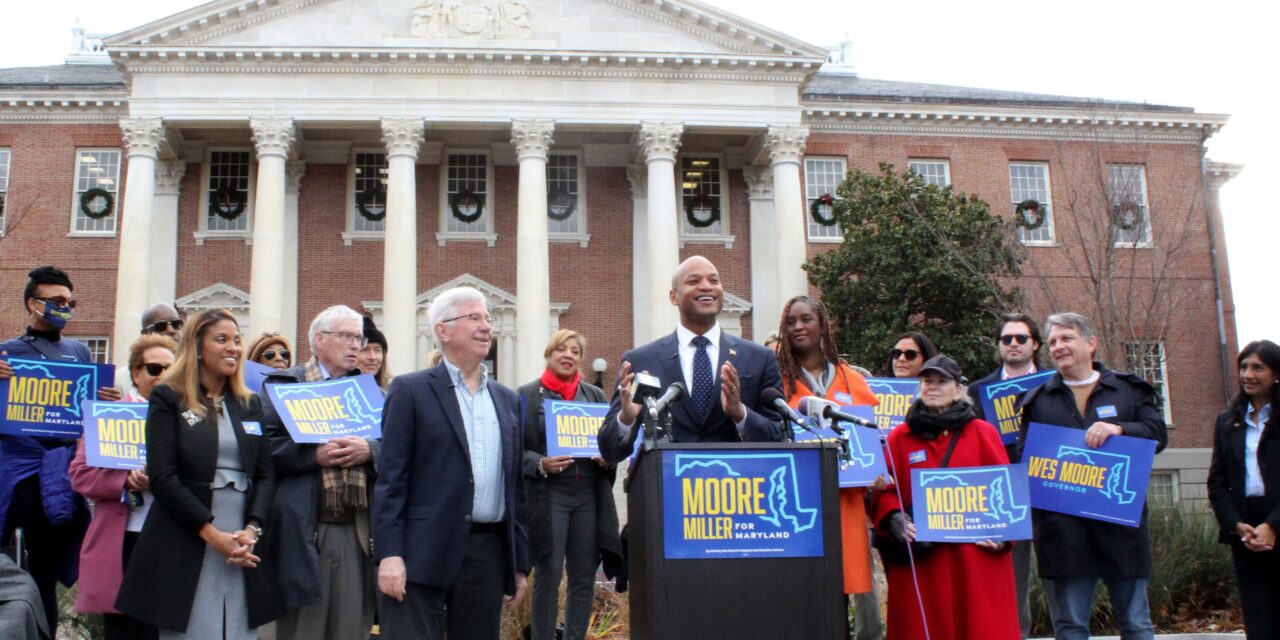 MARYLAND HOSPITAL BEDS NEARLY FULL: As COVID-19 cases again spike around the country, the rapidly spreading omicron variant is gaining a foothold with nearly 3% of U.S. COVID cases. Maryland and surrounding states are among the nation’s lowest at 0.5% but that number from the CDC may understate omicron’s effect because of Maryland’s cybersecurity breach more than 10 days ago. Already almost every hospital bed in Maryland is full, driven by COVID-related hospitalizations that have more than doubled since mid-November. Meredith Cohn and Hallie Miller/The Baltimore Sun.

WITH RAPID RISE IN COVID, ELRICH CONSIDERS OPTIONS: Montgomery County Executive Marc Elrich said Wednesday that he is concerned about the rapid rise in COVID-19 cases both throughout the state and in the jurisdiction that he leads. To make matters worse, Elrich noted that the county may not have a full picture of what is going on because the state’s COVID-19 tracking portal was hacked at the beginning December, forcing it to shut down for two days. Bryan Renbaum/Maryland Reporter.

RISING COVID CASES IMPACTING SCHOOLS: Youth’s Benefit Elementary School in Fallston is currently experiencing the largest COVID-19 outbreak of any school in Maryland, according to data from the Maryland Department of Health. As of Wednesday, Youth’s Benefit had reported 110 cases of COVID-19; it is the only public school in the state to report an outbreak of more than 100 cases. Callan Tansill-Suddath/ The Aegis.

ARUNDEL SCHOOLS WAIVE QUARANTINE FOR ASYMPTOMATIC STUDENTS: The Anne Arundel County Board of Education voted 7-1 on Wednesday evening to waive quarantine requirements for asymptomatic students who have come into contact with a COVID-19 case, a move that should reduce the number of students who are at home and away from the classroom. Rachael Pacella/The Capital Gazette.

KOPP IN SPOTLIGHT AT HER LAST BPW MEETING: The Maryland Board of Public Works approved dozens of contracts worth several hundred millions of dollars on Wednesday. But what everyone who participated in the meeting most wanted to talk about was the contribution that Treasurer Nancy K. Kopp made to the state during her nearly half-century career. Wednesday’s meeting was the 78-year-old Democrat’s final BPW session. Bruce DePuyt/Maryland Matters.

1st DISTRICT HOPEFUL PLANS TO MOVE AFTER REDISTRICTING: R. David Harden, one of three Democratic contenders vying for a chance to unseat Andy Harris in 2022, said he’s looking to move into the district he hopes to represent. His current home is in Carroll County, which had been in the 1st District. But the new map puts him in the 8th. He said in an interview that he’s “actively looking for a place on the Eastern Shore.” Bennett Leckrone/Maryland Matters.

HOGAN CAMP PAYS FINE FOR EXCEEDING DONATION LIMIT: Gov. Larry Hogan’s campaign has paid a $2,500 fine for accepting political donations above the state’s limits. The fine was paid as the Republican governor disbands his “Larry Hogan for Governor” state finance account and the over-the-limit donations represented a fraction of the $20 million raised from more than 20,000 donors, the campaign said. Pamela Wood/The Baltimore Sun.

IN-CUSTODY DEATHS TO BE PROBED IN REVIEW OF EX-MEDICAL EXAMINER: The state medical examiner’s office in Maryland has released a list of approximately 1,300 in-custody death cases that will be used as part of a review scrutinizing the work of Dr. David Fowler, the state’s former chief medical examiner, who in April served as a defense witness for former Minneapolis Police Officer Derek Chauvin in George Floyd’s murder trial. The list has been sent to the office of Maryland Attorney General Brian Frosh. Glynis Kazanjian/WJLA-7News.

GLENDENING BACKS WES MOORE FOR GOVERNOR: Former Gov. Parris N. Glendening came to Lawyers Mall on Wednesday to endorse a next generation leader for the job he once held, backing Wes Moore in the 2022 Democratic gubernatorial primary and saying the former foundation CEO and best-selling author had the best qualifications and skills to meet the state’s future challenges. Josh Kurtz/Maryland Matters.

FOUNDER OF BREAD AND ROSES PARTY TO RUN FOR GOV AS DEMOCRAT: The Bread and Roses Party, a socialist party that was officially recognized by the state of Maryland for the 2020 election cycle, has disbanded. The party founder, Jerome M. Segal, an author, college lecturer and activist, says he plans to run for governor as a Democrat in 2022. Josh Kurtz/Maryland Matters.

B’MORE NIXES PRE-EMPLOYMENT DRUG TESTS: Baltimore’s spending board agreed Wednesday to eliminate preemployment drug testing for applicants for many city jobs. The decision, made by a unanimous vote of the five-member Board of Estimates, comes amid a rash of vacancies for city positions and a highly-competitive job market. Emily Opilo/The Baltimore Sun.