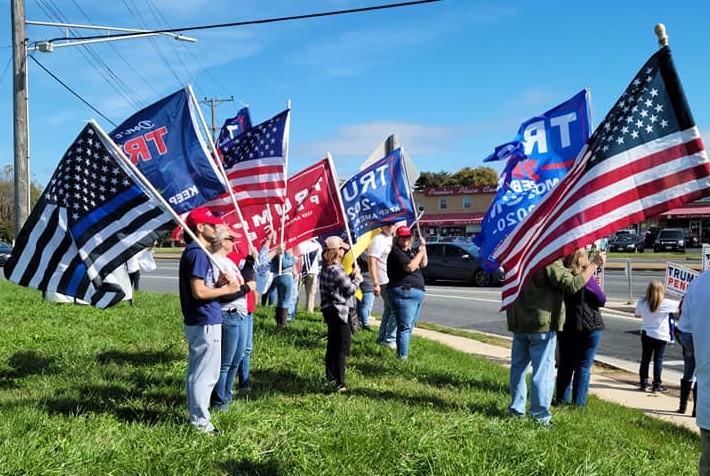 There were several Trump rallies and caravans around Maryland this weekend, including this one in Baltimore County. From David Judd's Facebook page

HOGAN TO ALLOW SOME IN-PERSON SPORTS VIEWING: Gov. Larry Hogan eased some restrictions on outdoor sporting venues Friday, paving the way for teams like the Baltimore Ravens to welcome some fans back to watch games in-person, writes Amanda Yeager for the Baltimore Business Journal. Hogan announced that he had updated Maryland’s Covid-19 restrictions on the venues to allow spectators at 10% of a venue’s total capacity.

1,300 NEW COVID CASES OVER WEEKEND: Maryland officials on Sunday reported 530 new cases of the coronavirus and no new deaths, Phil Davis reports in the Sun. Sunday’s additions bring the state’s total to 135,657 cases of COVID-19 since officials began tracking infections in mid-March. Officials say 3,891 people have died due to the disease.

3 JUDGE PANEL DISMISSES PART OF CHALLENGE TO TRUMP ON CENSUS: A three-judge panel in Maryland has dismissed part of a case challenging the decision of President Donald Trump’s administration to end data collection for the 2020 census early after the Supreme Court ruled the once-a-decade head count can end last week, Mike Schneider of the AP reports.

MAIL-IN VOTING UNDER WAY: Mail-in voting is under way as Marylanders consider a proposed constitutional amendment granting the legislature the ability to increase line-item funding and add items to the state budge, Philip Van Slooten of Capital News Service reports. Legislators advanced the measure in March, largely along party lines, with lead sponsors arguing it seeks to balance the budget process while opponents state it removes a legislative check.

HOGAN WRITES IN REAGAN: Gov. Larry Hogan, who has demonstrated that he’s no ally of President Donald Trump, cast a write-in vote for the late President Ronald Reagan in this fall’s election, Pamela Wood of the Sun reports. The Republican governor voted last week by sending off his ballot through the U.S. Postal Service, his spokesman, Mike Ricci, said Friday.

LYNCHING LEGACY TIED TO VOTER SUPPRESSION: Jonathan Pitts of the Sun reports that several speakers at the third annual Lynching in Maryland conference, which more than a hundred people attended Saturday via videoconference, tied the legacy of lynching to voter suppression of minorities and related social justice issues. Lynching is a form of racial terror that killed more than 4,000 people in the U.S. in the decades following the Civil War, including at least 44 in Maryland.

POLICE BODY CAMS MAY BE MANDATED: Police departments around the state could be required to begin using body cameras and release some disciplinary records of officers under a set of recommendations made by the Commission to Restore Trust in Policing, reports Bryan Sears for the Daily Record.

BLACK GRAVES MAY BE MOVED FOR HIGHWAY: Katherine Shaver of the Post writes that, tucked behind a bamboo grove and hidden from motorists whizzing past on the Capital Beltway in Maryland lie what researchers say are at least 80 graves, mostly unmarked, in a small wooded cemetery for a Black community dating to the 1890s. A Maryland State Highway Administration plan to widen the Beltway and add toll lanes — potentially requiring that some gravesites be moved — has raised new objections from local residents and historians who say a painful history shouldn’t be repeated.

IN CONGRESSIONAL RACES: WHO IS RUNNING? All eight congressional incumbents in Maryland are looking to hang onto their seats for another term, and all eight are expected to pull off reelection on Nov. 3 with little trouble. Who are the incumbents and their challengers? Meagan Flynn gives a rundown for the Post.

KLACIK REPORTS $6.4M IN RACE AGAINST MFUME: Kimberly Klacik, the Baltimore-area congressional candidate who has been promoted on social media by President Donald Trump and his supporters, reported raising $6.4 million in three months — a huge haul for a Republican in a Democratic-dominated district, Jeff Barker of the Sun reports. She is running for the 7th Congressional seat against U.S. Rep. Kweisi Mfume.

McDERMOTT V. BROWN: Prince George’s native George E. McDermott is making his sixth bid for Congress this fall, challenging Rep. Anthony Brown, the two-term incumbent in Maryland’s 4th District, Olivia Sanchez reports in the Capital Gazette. The two have faced off before — in 2018, Brown received 78% of the vote, defeating McDermott, who received 20%. In 2016, Brown received 74%, and McDermott received 21%.

ART LOVERS ASK AG TO STOP BMA SALE OF WORKS: Nearly two dozen art lovers are asking top Maryland officials to block the Baltimore Museum of Art’s proposed sale of three iconic and arguably irreplaceable artworks. They warn that Andy Warhol’s “The Last Supper” is at risk of being disposed of “at a bargain-basement price.”

OPINION: RESHAPING BMA NARRATIVE: In an op-ed for the Sun, BMA chief curator Asma Naeem and BMA senior curator Katy Siegel attempt to answer the above criticism, writing, “we are reshaping this narrative to render a fully multi-dimensional art history, building on the past three years of acquisitions, exhibitions and programs focused on Black artists, as well as a year devoted exclusively to female-identifying artists.”

FREDERICK PARENTS PLAN ALL-DAY LOGOUT PROTEST: Following some in-person protests outside of Frederick County Board of Education meetings in recent weeks, some parents of Frederick County Public Schools students have planned an all-day logout protest that is scheduled to take place on Tuesday, Katyrna Perera of the Frederick News-Post reports.

SINCLAIR TO REMOVE ANTI-MASK COMMENTARY: Sinclair Broadcast Group, the Hunt Valley-based TV station owner and operator, will remove commentary in its latest “America This Week” program that dismisses mask-wearing as a way to slow COVID-19 amid a backlash about the comments, reports Lorraine Mirabella for the Sun. The decision Friday to redact the comments of host Eric Bolling came the same day that Sinclair announced Bolling will moderate a Wednesday town hall with Republican President Donald Trump at the White House.

WOMEN MARCH IN B’MORE: In a scene that played out in D.C. and in hundreds of cities across the country, more than 100 people marched from Baltimore’s federal courthouse to City Hall Saturday chanting “No confirmation until inauguration” and “Vote him out” as part of the 2020 Women’s March, Sarah Kim of WYPR-FM reports.

TRUMP RALLIES THROUGHOUT REGION: They came with their large pickup trucks, cars, and even a trailer with a boat, but no matter what the mode of transportation, the vehicles seemed dwarfed by their dozens of large Trump flags and signs in Eastern Baltimore County, Liz Bowie reports in the Sun.

B’MORE CITY VOTERS TO GET TEMPERATURE CHECK: Emily Opilo of the Sun reports that the city’s election director said Friday that Baltimore residents who opt to vote in person at early voting centers or on Election Day will be temperature checked before they enter as a precaution against the coronavirus.