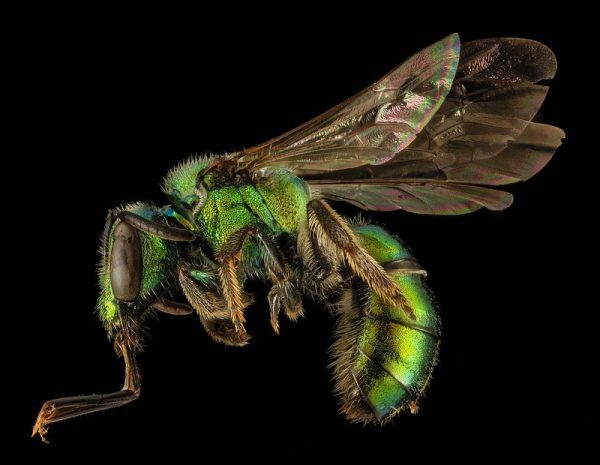 Listen to this article
By SHAUNEEN MIRANDA
Capital News Service
WASHINGTON – Although honeybees have captured national attention in an effort to “save the bees,” some Maryland entomologists want to shift the focus toward native bee species that are in graver danger.

Bees are the most important pollinators on Earth, critical to populating native plants and fundamental to ensuring the abundance and variety of agricultural crops.

Misguided information on which bee species to save has created a media frenzy over protecting the honeybee despite research pointing to steady honeybee populations, experts say.

“The honeybee is not the bee we need to save because it’s not endangered,” said Dr. Nathalie Steinhauer, science coordinator for the Bee Informed Partnership Inc. and a postdoctoral researcher at the University of Maryland’s Department of Entomology.

The honeybee is native to Europe, Africa and Asia. Early colonists brought these insects to the United States, where they now dominate research and general understanding of bees.

Beekeepers have managed to keep the overall number of honeybee colonies in North America stable over the last two decades, according to the Bee Informed Partnership, a coalition of researchers and labs established to improve the health and survival of honeybee colonies.

To be sure, pesticides, stress and diseases still hinder the health of honeybees nationwide.

But some native bee species, such as the rusty patched bumblebee, are truly endangered and often compete with honeybees to pollinate natural environments.

Part of the reason honeybees get so much attention stems from constant societal reinforcement of their importance.

“That’s why we don’t know anything about (native bee species), and then when someone puts out a media report, a lot of it’s really short,” he said.

Roughly 4,000 native bee species reside in North America and approximately 430 of those species inhabit Maryland, including at least 80 kinds of ground-dwelling mining bees, 20 species of leaf cutting bees, 10 types of bumblebees, plus carpenter bees, mason bees (they make mud nests) and squash bees (which live in the ground near pumpkins or squash plants).

But researching native bee species can be a daunting task, according to Jennifer Selfridge, the invertebrate ecologist for the Wildlife Heritage Program of the Maryland Department of Natural Resources.

Many native bee species are tiny and solitary, and bee sampling is a relatively new development in entomology.

“The desire is to want to lump them into one big study so you can understand them all, but they’re very different,” Selfridge said.

Selfridge said the Native Bee Inventory and Monitoring Lab’s location in Maryland has led to more data and research on native bee species compared to other states.

Even so, research on Maryland’s native bee species lags behind research on other insects and invertebrates due to the limited funding and lack of long-term datasets.

“The funding that we have available to us is generally more geared toward rare, threatened and endangered things, so things that are really in trouble,” Selfridge said.

“‘You can’t find them anymore’ is not a great, very nuanced survey program,” Droege said.

“That’s where we are. But worse is, things that are not bumblebees are so tiny, so obscure, we don’t even know if they were there to begin with because we are describing entirely new species that weren’t described before,” he said.

Efforts to “save the bees” grew out of human actions, including urbanization that destroys natural insect habitats, including harming bee populations.

“I really want to emphasize: we do know that nature is changing,” Droege said. “You don’t put houses on the ground and have positive benefits to nature.”

“And the fact that we’re losing landscape to urbanization is something that’s going to actually increase the impacts of climate change,” Steinhauer said.

“The state…is a big property owner, manager and a regulator, so you have regulations that surround a lot of things that would impact the number of flowers in the area, essentially,” he said.

At the individual level, people can also make a positive impact on the future of bees.

As consumers, people can choose to support companies that make the effort to reduce the environmental impacts affecting bee populations, Steinhauer said.

Although commercial beekeeping helps with pollination and honey production, personal beekeeping can drive down the population of native bee species that compete with honeybees for pollination.

“If you’re getting into honeybees because you want to save the environment, you’re not –– you’re doing the opposite,” Droege said.

“Your hives are…not saving honeybees because honeybees have disease problems and your hive is probably a disease vector, if anything,” he said.

The decline in populations of native bee species points to a larger biodiversity crisis facing the United States and the world, according to scientists.

“We are losing species at a rate that is faster than we’ve ever recorded in history,” Steinhauer said. “Bees are not an exception.”