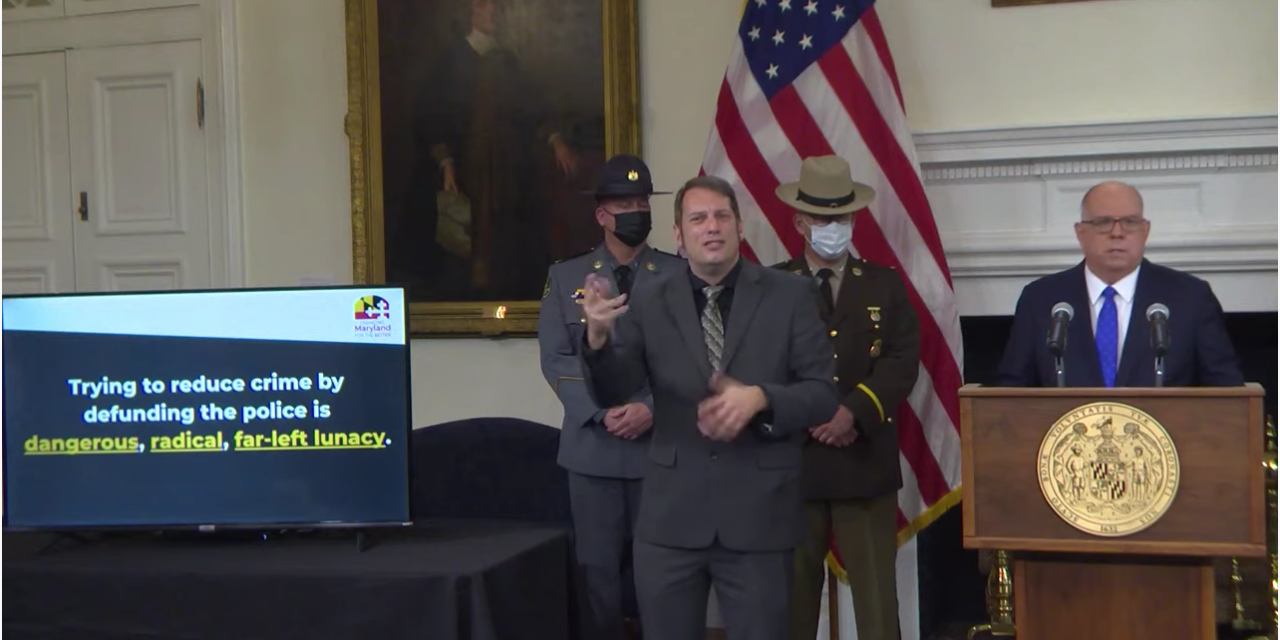 “Our $150 million refund the police initiative will provide a desperately needed shot in the arm to our state and local police agencies. But there is far more work to be done,” Hogan said at a news conference at the State House in Annapolis.

Hogan said some of the funds will be allocated immediately and some will be included in the budget his administration will submit to the General Assembly prior to the start of the next legislative session.

Hogan emphasized that the state will always stand by its law enforcement personnel so long as he is governor and strongly condemned the activists and politicians who support defunding the police.

Hogan said that violent crime is “out of control” in Baltimore City and pointed to statistical trends that seemingly indicate that the city will exceed 300 homicides by the end of this year. Hogan said that city officials, particularly State’s Attorney Marilyn Mosby, have not taken sufficient action to address violent crime.

Senate President Bill Ferguson responded to Hogan in a statement on Friday, saying that increased support for law enforcement in-and-of-itself is not a long-term solution to preventing violent crime.

“Police are just one part of creating safe communities. Genuinely improving public safety isn’t about just writing a bigger check. A real effort to stop violence and make communities safe requires a coordinated plan that gets executed purposely every day. It also includes strategies that recognize poverty and opportunity shape the outcome of individuals.”

Ferguson, who represents Baltimore City, suggested that he did not appreciate Hogan’s tone.

“Divisive rhetoric does not make us safer, and we hope the Administration will join us moving forward to focus on problem-solving. Communities deserve targeted, thoughtful, and data-driven approaches and the Maryland General Assembly will continue doing that work.”

And Ferguson stressed that improving the relationship between underserved communities and the police is a vital component to enhance public safety.

“Nothing is more important than ensuring public safety throughout the State. Enhancing law enforcement trust and effectiveness is an important objective to create that safety. We have and we will continue to support investments that enhance trust and safety.”

Following the 2021 legislative session, a series of police reform bills were enacted into law over Hogan’s veto. The measures include limits on the use of excessive force and increased penalties for officers who do so without just cause, restrictions on no-knock warrants, easier access to officer personnel records, and phased-in requirements for all officers in the state to wear body cameras.

Property tax may need to rise to pay back bonds