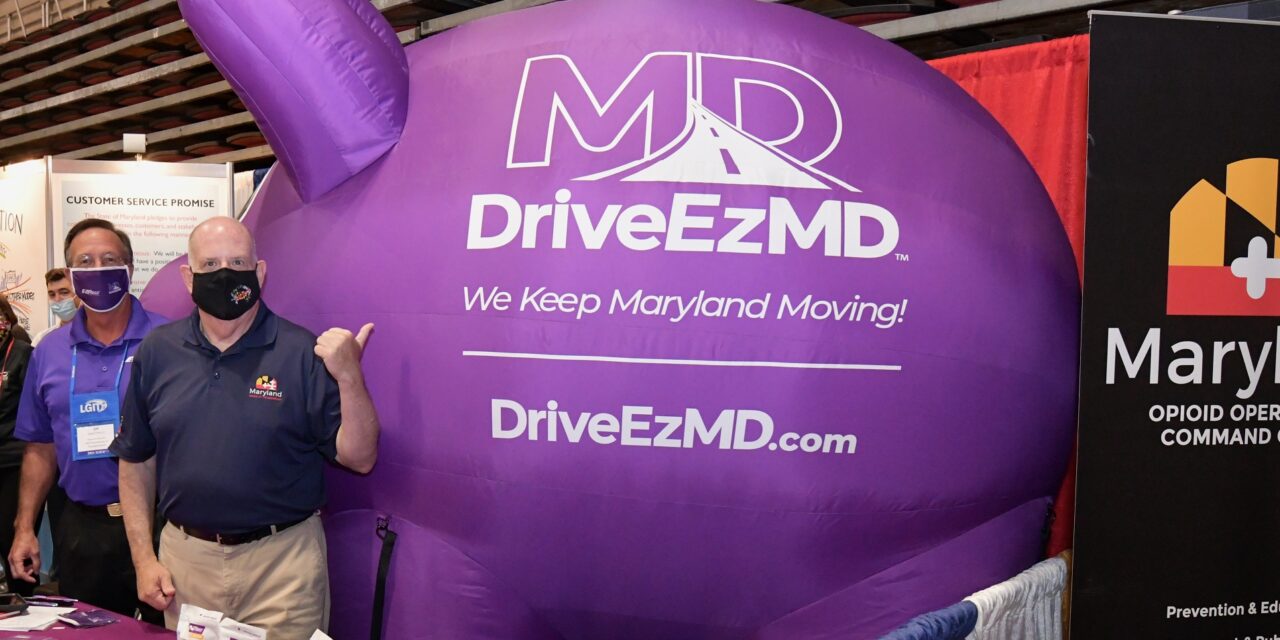 At the Maryland Association of Counties conference in Ocean City this past weekend, Gov. Larry Hogan visited the many booths of state agencies in the exhibit hall, including the piggy bank of the Maryland Transportation Authority. with Executive Director Jim Ports. Governor's Office photo

STATE GAINS 22,000 JOBS: Maryland’s economy gained 22,200 in jobs in July and the state’s unemployment rate from dropped from 6.2% to 6%, according to preliminary data released by the U.S. Department of Labor’s Bureau of Labor Statistics on Friday morning, Bryan Renbaum of Maryland Reporter writes.

NOT EVERY SCHOOL TO REQUIRE MASKS: Despite strong recommendations from both health and education leaders, masking will not be required in every Maryland school to prevent the spread of the coronavirus, as political leaders defer decisions about mandates to others amid vocal opposition, Liz Bowie and Hallie Miller report for the Sun.

HOGAN PUSHES ROUTE 90 PLAN: Gov. Larry Hogan on Saturday touted a state infrastructure plan that will include funding for roads, transit and Route 90, “the gateway to Ocean City project,” Alex Mann of the Sun reports.

ASIAN AMERICAN VOTERS GAIN STRENGTH: As the 2022 Maryland primaries approach, politicians, activists and party officials are increasingly turning to the state’s Asian American population as key to future elections, Stephanie Lai of the Post reports. This voter bloc — the fastest-growing in the nation — saw record turnouts across the country and in the state in recent elections.

FREDERICK SCHOOLS MAY ALTER COVID PROTOCOLS: After “a small number” of students and staff across Frederick County Public Schools were told to quarantine last week due to COVID-19 exposure, a district spokesperson said the school system would consider updating the way it tracks and publishes virus data, writes Jill Atelsek reports for the Frederick News-Post.

WA CO PARENTS THREATEN TO PULL KIDS FROM SCHOOLS: A group of Washington County parents fighting a mask mandate from the public school system contemplated Friday night hitting the system in its pocketbook, reports David McMillion for the Hagerstown Herald-Mail. If the school system is going to carry through with its requirement that students wear masks to control the coronavirus when classes resume Aug. 30, parents said they’re prepared to take their kids out of the system.

STATE COLLEGES READY TO REOPEN: As the school year approaches, colleges and universities across Maryland will be reopening their campuses to students, faculty and staff while implementing plans to guard against the spread of COVID-19, Christine Hansen reports for the Daily Record.

OPINION: OVERTURN HOGAN’s VETO ON HARM REDUCTION ACTION: In an op-ed in Baltimore Brew, Rajani Gudlavalleti of the Baltimore Harm Reduction Coalition, opines that pressure must be put on the state legislature to overturn Gov. Larry Hogan’s veto of a bill that would have decriminalized drug paraphernalia. Such criminalization has been used to wage the unsuccessful war on drugs instead of treating drug addiction as the health crisis it is.

HOGAN GETS BOOSTER SHOT: Gov. Larry Hogan said on Face the Nation Sunday he has received a COVID-19 booster shot, as state health officials announced 80% of adult residents have received at least one dose of a vaccine, Christine Condon of the Sun reports. Hogan, a cancer survivor, said he received his third dose of the vaccine Monday.

PRESSING THE FLESH AT MACo: The final full day of politicking at the Maryland Association of Counties summer conference ended Friday with six candidates for statewide office circling the tents and pressing the flesh outside the convention hall in Ocean City, where several hundred state and local officials were eating crabs and drinking beer, writes Josh Kurtz, Bennett Leckrone and Bruce DePuyt for Maryland Matters.

CONVERSATIONS WITH THE GUBERNATORIAL CANDIDATES: KELLY SCHULZ: Maryland Matters sat down one-on-one with the 2022 candidates for governor during the MACo conference in Ocean City. First up is Commerce Secretary Kelly M. Schulz, a Republican who has been in the Hogan administration for eight years, writes Danielle Gaines. Prior to that, she was a state delegate. Her pitch to voters: “I believe in them,” Schulz said. “I believe in their future.”

MFUME’s LONG INTERMISSION BEFORE 2nd ACT IN CONGRESS: “I thought I’d found a way to get into the Guinness Book” of World Records, joked Kweisi Mfume, who left Congress after five terms in 1996 to become president of the NAACP, never imagining he would return nearly a quarter century later following the death of his close friend, the late Rep. Elijah Cummings. Mfume won a special election early last year to replace Cummings before securing a two-year term in November. As he navigates a rare second act in Congress, Mfume’s experience makes him distinct among the 64 recently elected members serving their first full terms, Jeff Barker reports for the Sun.

GARRETT POPULATION DROPS 4.3%: Garrett County’s population declined by 4.3% over the last decade, according to the U.S. Census. New data from the 2020 census shows a total population of 28,806 in the county. That’s a drop from 30,097 in 2010 and a reversal in a decades-long trend of population growth, Joseph Hauger of the Garrett County Republican reports.

EUTHANIZING OSPREYS IN CALVERT CAUSES STIR: Two juvenile ospreys were taken from their nest on a light pole at a park in Calvert County and euthanized, causing a stir among local wildlife enthusiasts and birders. County officials said they followed all protocols and federal laws protecting birds in removing the young ospreys from the pole to replace a light fixture on it at Cove Point Park in Lusby, but that is little comfort to local wildlife rehabilitation experts and birders, reports Dana Hedgpeth for the Post.