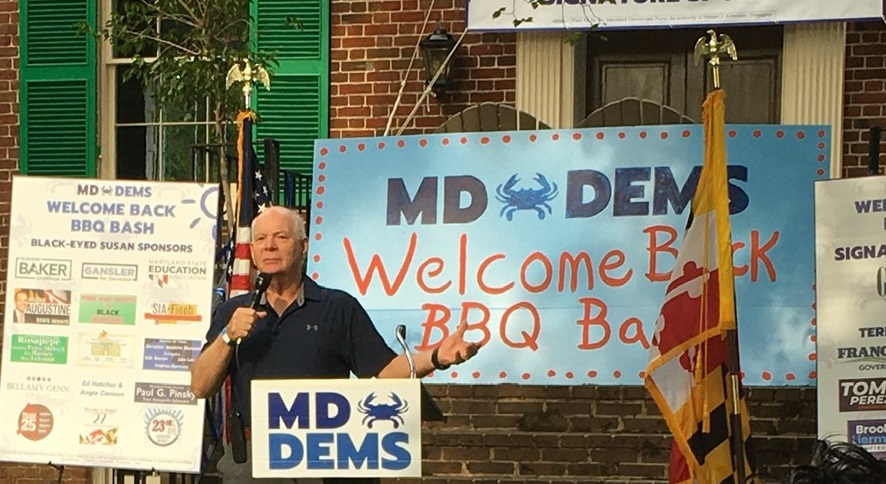 Sen. Ben Cardin addresses hundreds of Democrats at a Welcome Back BBQ, the first big in-person event since the pandemic began. MarylandReporter.com photo

STATE LOSES 6,400 JOBS IN JUNE: Maryland’s economy shed 6,400 jobs in June and the state’s unemployment rate increased from 6.1% to 6.2%, according to preliminary data released by the U.S. Department of Labor’s Bureau of Labor Statistics on Friday morning. By contrast, reports Bryan Renbaum for MarylandReporter, Maryland added 11,500 jobs in May. The national unemployment rate is at 5.9%.

SPEAKER JONES SUPPORTS VOTER DECISION ON RECREATIONAL MARIJUANA: The effort to fully legalize marijuana got a boost Friday, with the speaker of the Maryland House of Delegates announcing her support for allowing voters to decide in 2022, Pamela Wood and Bryn Stole of the Sun report.

DEM BBQ KICKS OFF 2022 CAMPAIGN SEASON: More than 600 Democratic Party loyalists streamed onto the grounds of Pleasant Prospect, a former tobacco plantation, on Sunday eager to meet candidates and reunite after more than a year of seeing one another largely on computer screens, Pamela Wood and Bryn Stole report for the Sun. Nearly all of the nine Democrats running for governor showed up.

LOCAL DREAMERS UNHAPPY WITH FEDERAL COURT RULING: A federal court ruling against the “dreamers” program for young people who are undocumented immigrants reverberated across the country, including in Maryland where thousands of people are enrolled in the program, Pamela Wood of the Sun reports.

ARTS ORGANIZATIONS IN MARYLAND GET FEDERAL AID: The Lyric, the Baltimore Symphony Orchestra, the Annapolis Shakespeare Co. and scores of other Maryland arts and entertainment venues that have struggled in the pandemic will get an infusion of tens of millions of dollars in federal grants, Lorraine Mirabella of the Sun reports.

FOOD WASTE DIVERSION TO BEGIN: Elizabeth Shwe of Maryland Matters writes about the change in state law that will mean that large grocery stores, restaurants and fresh produce distributors will have to donate servable food, send it to farms where it can be used as animal feed or to transport it to organic recycling facilities instead of sending the unused food to landfills.

OPINION: REDISTRICTING GETS UGLY FIRST: In a column for Maryland Matters, Frank DeFilippo writes about the ugliness behind, historically and currently, and in front of the redistricting process in Maryland.

VAN HOLLEN FUNDRAISING CONTINUES APACE: With his re-election campaign looming and at least the distant prospect that Gov. Larry Hogan Jr. (R) could take him on in 2022, U.S. Sen. Chris Van Hollen (D-Md.) has accelerated his pace of fundraising, collecting over $1 million in the past three months and more than $2 million so far this year, Josh Kurtz reports for Maryland Matters.

CARROLL NIXES VIRTUAL SCHOOL DUE TO F SIGNUPS: The Carroll County Public Schools system will not be moving forward with its plan for virtual school during the 2020-21 academic year. School leaders told the Board of Education that less than 1% of students were signed up for the alternative learning platform created for families who did not want students participating in the full-time, in-person learning for the upcoming school year, Kristen Griffith reports for the Carroll County Times.

OPINION: SHEA UNDERMINES IG: In a column for Baltimore Brew, David Plymyer opines on the role of an advisory board overseeing an Inspector General and those operations and concludes that BaltimoreCity Solicitor Jim Shea is wrong. Plymyer writes, that Shea “had an opportunity this week to assure residents that he would not be a party to the attempt by some City Hall politicians to neutralize the effectiveness of the IG. He chose not to do so. Instead, he heightened fears of a concerted effort by some elements in city government to weaken the IG’s ability to root out waste and corruption.”

WHAT’s NEXT IN THE RAMOS TRIAL: Alex Mann of the Capital Gazette writes that attorneys in the sanity trial of the man who killed five Capital Gazette employees are coordinating their calendars to set a sentencing for sometime in September. At that hearing, the judge has discretion to sentence Jarrod Ramos to life without the possibility of parole, life with the chance of parole, which experts said is almost certain not to happen, or a life sentence with some amount of time suspended. In the meantime, Ramos has 10 days from the verdict to ask for a new trial.

FAMILIES OF CAP-GAZETTE MURDERS SUE NEWSPAPER: Hours after a jury found the man who gunned down five people in the Capital Gazette newsroom criminally responsible for their deaths, lawsuits were made public alleging The Baltimore Sun and its parent, which own the Annapolis newspapers, did not do enough to prevent the attack, John Holland reports for the Sun.

ANNAPOLIS ELECTIONS BOARD LOSES GOP MEMBER: The Republican member of the Annapolis elections board has left his position because he no longer lives in the city. The city is currently considering candidates to replace Cliff Myers, who served on the board for seven years, as soon as possible, Brooks DuBose of the Capital Gazette reports.