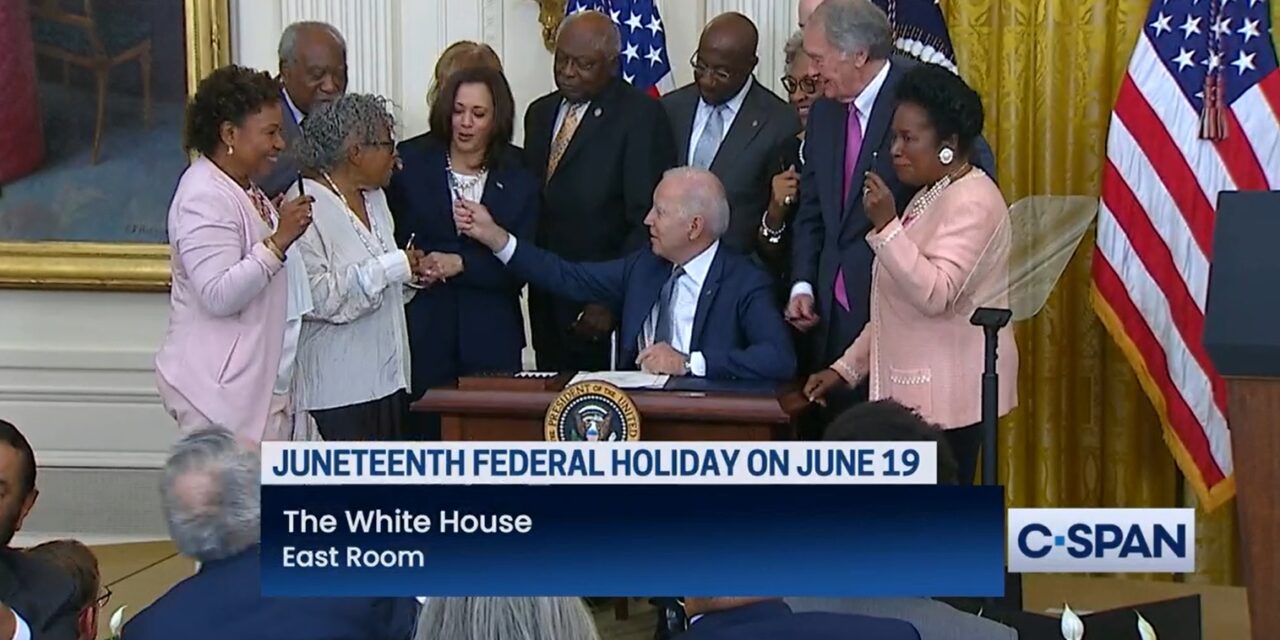 President Biden hands out pens as he signs the law creating Juneteenth as a new federal holiday. C-Span screen shot

STATE, LOCAL GOVTs CLOSED FOR NATION’s FIRST JUNETEENTH OBSERVANCE: Maryland state government offices and many local government agencies will be closed Friday to observe the new Juneteenth National Independence Day, Pamela Wood of the Sun reports. The announcement comes after the U.S Congress passed a law this week designating June 19 as a federal holiday that commemorates the end of slavery in the United States. President Joe Biden signed the bill into law Thursday afternoon.

REDISTRICTING PANEL HEARS FROM HARFORD, CARROLL: The Maryland Citizens Redistricting Commission heard the public’s view on redrawing the state’s legislative and congressional districts Wednesday night, with many Harford and Carroll officials advocating for keeping local communities together and equalizing representation among legislative districts, James Whitlow reports for the Aegis.

BACKERS OF HOGAN ROAD PLAN SCRAMBLE TO GET IT BACK ON TRACK: One day after a regional transportation panel dealt a major blow to the planned widening of two interstate highways that run through Montgomery County, project backers scrambled to salvage the beleaguered plan, Bruce DePuyt of Maryland Matters reports.

EFFORT TO UNION COMMUNITY COLLEGE WORKERS CONTINUES: Elizabeth Shwe of Maryland Matters writes about the long, difficult and continuing fight to expand collective bargaining rights to all employees at Maryland’s 16 community colleges. It finally made it through the General Assembly relatively smoothly in 2021. But even after the Maryland Association of Community Colleges withdrew its opposition after reaching a compromise with labor unions, Gov. Larry Hogan vetoed the bill.

FOES FIGHT RELICENSING OF CONOWINGO DAM: Environmental groups filed an appeal on Thursday in an attempt to overturn a federal commission’s decision to relicense the Conowingo Dam. They contend the terms of the new license do not do enough to address efforts needed to clean up the Susquehanna River and Chesapeake Bay, Elizabeth Shwe of Maryland Matters reports.

POLITICAL FACE TIME, GLAD-HANDING RETURN: One of the consequences of the COVID-19 pandemic has been the absence of large-scale political events in Maryland. That changed dramatically on Thursday night, when seven of the eight Democratic candidates for governor gathered in the open air in Montgomery County and spoke, one by one, to a crowd of politicians, party activists, donors and State House lobbyists. Officially, it was a fundraiser for House Majority Leader Eric G. Luedtke (D-Montgomery), writes Josh Kurtz for Maryland Matters.

B’MORE POLICE SEE SOME PROGRESS ON PROBLEMS: In 2018, a federal judge and a panel of experts overseeing reform of Baltimore’s troubled police department expressed little confidence in the force’s ability to investigate its own officers. Now, after years of training and expense to upgrade its technology, the department and federal overseers point to signs that things are getting better, though problems and criticism remain, Jessica Anderson of the Sun reports.

ADVOCATES CELEBRATE SUPREMES UPHOLDING OBAMACARE: Public health advocates in Maryland are celebrating the Supreme Court’s decision to dismiss a challenge to the Obama-era health care law, preserving insurance coverage for millions of Americans. The justices, by a 7-2 vote, left the entire law intact Thursday in ruling that Texas, other Republican-led states and two individuals had no right to bring their lawsuit in federal court, Johanna Alonso of the Daily Record reports.

GARDNER KEEPS COVID RESTRICTIONS A BIT LONGER: In the wake of Gov. Larry Hogan’s announcement that most Maryland COVID-19 restrictions will end July 1, Frederick County Executive Jan Gardner presented a framework for the phased reopening of county government buildings on Thursday. County employees who have not returned to their workplaces can do so beginning July 6, Jack Hogan of the Frederick News-Post. Masks will be required in communal areas and at meetings and other gatherings, Gardner (D) said. The county’s various divisions won’t be cleared to offer public access, likely by appointment at first, until Aug. 2.