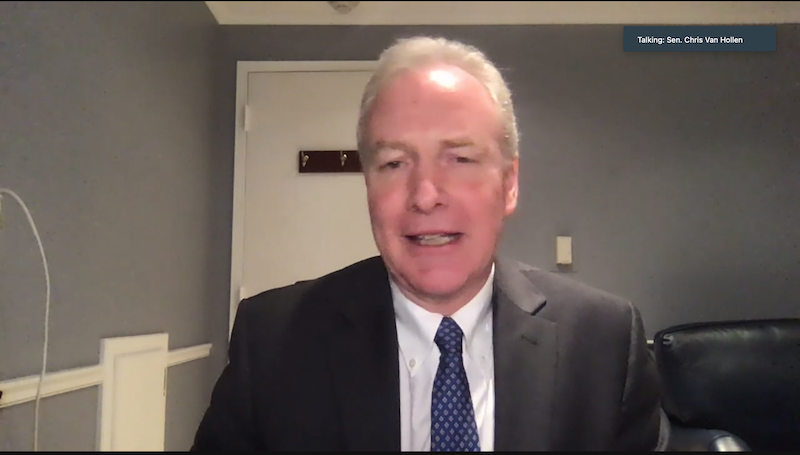 U.S. Sen. Chris Van Hollen (D-Md.) Friday lauded the Biden administration’s $1.7 trillion infrastructure plan proposal for its inclusion of non-traditional items and its focus on improving both racial and economic equity throughout the nation.

Republicans on Capitol Hill have balked at the cost of the plan, which was originally $2 trillion, and have responded with a counterproposal that costs about $928 billion.

“Sometimes when people think of infrastructure they think of just that traditional infrastructure of roads and bridges. And obviously, it includes that. But in the 21st century it is much bigger than that,” Van Hollen said at a virtual roundtable discussion with members of the NAACP Maryland State Conference.

Van Hollen added: “Broadband in my view is essential to the success of every student and the success of small businesses. And it is to the 21st century what electricity was to the 20th century.”

Even prior to the coronavirus pandemic a “digital divide” largely affected both students of color and students who live in rural areas and subsequently led to a “homework gap,” Van Hollen said.

The senator emphasized that efforts to remedy those inequities began with the American Rescue Plan Act and that the administration’s infrastructure proposal would effectively “finish the job.”

Van Hollen noted that cost is a major barrier to high-speed internet access in many parts of Maryland and that that should be taken into consideration.

“There are lots of places in Maryland, like Baltimore City, where you have the pipes and the structure for broadband. But if a household can’t afford it, then access is meaningless.”

The administration’s infrastructure proposal includes efforts to increase access to affordable housing. And Van Hollen noted that there is a shortage of affordable housing in many parts of Maryland. He said there is a growing need for an increase in vouchers to enable working families to move to more economically prosperous areas.

The senator called for legislation to outlaw landlords from discriminating against tenants who pay their rent with vouchers. He called the practice: “a modern-day extension of redlining.”

“The is the first time in the history of these types of real robust funding from the federal government that we can be at the front of the table. It didn’t happen after the Civil War. It didn’t happen in World War I or in World War II. The New Deal was a reality but it didn’t trickle down. And the Great Society programs did what they did. But this seems like an opportunity to spread it around and we are looking forward to it.”

“We think that it is very important that in states like Maryland where you have a diverse population that the contracting for primary contractors…all business that is done here, we should have at least 35% of the primes who are African-Americans or members of the Black community-which is reflective of our representation in the state.