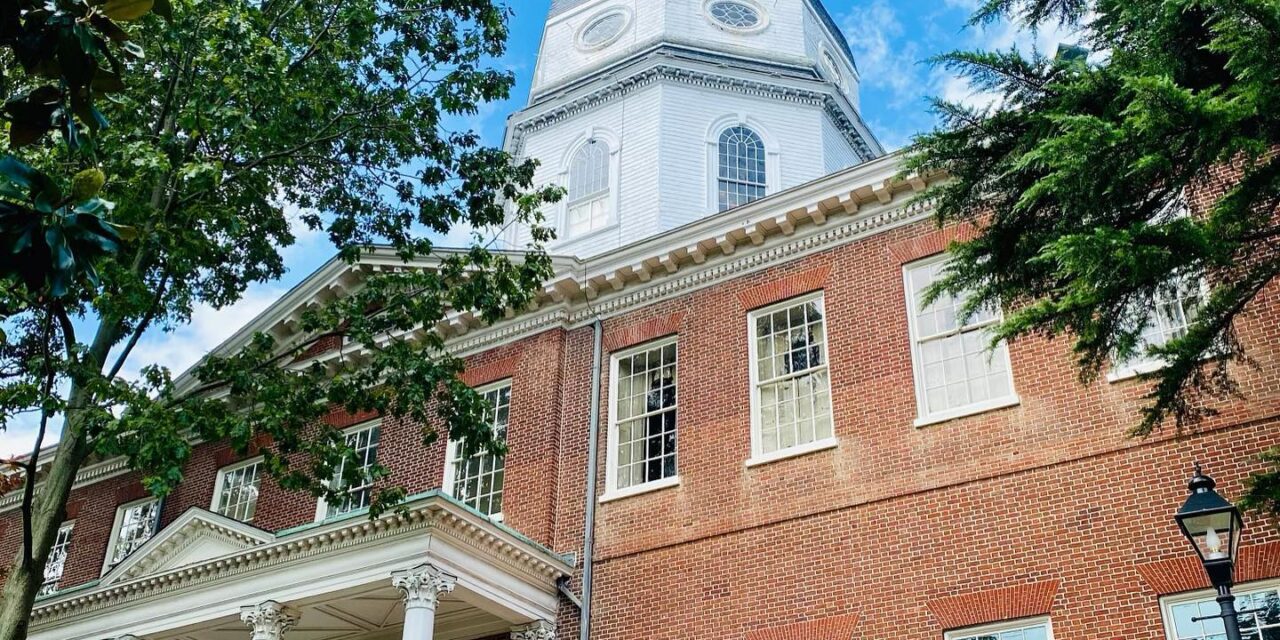 The front of the State House. Governor's Office photo

HOUGH, HAGEN SPAR AS  FREDERICK COUNTY EXEC RACE HEATS UP: The race for Frederick County executive is only in its early stages but it has already begun to heat up. On Monday, state Sen. Michael Hough (Frederick and Carroll), the only Republican in the race, ripped one of the Democratic candidates as “far-left,” Bryan Renbaum reports in Maryland Reporter.

SALMON 1-YEAR EXTENSION MUDDIES SEARCH FOR NEW SUPER: State laws dating back to the 1860s are making the hunt for Maryland’s next state school superintendent more difficult because the state school board can’t appoint the next leader to a normal four-year term, since Superintendent Karen Salmon accepted a one-year extension to her final term to continue working during the pandemic, Liz Bowie reports for the Sun.

GANSLER LAUNCHES RUN FOR GOVERNOR: Doug Gansler, the former Democratic state attorney general, is making another attempt to become Maryland governor, writes Pamela Wood for the Sun. Gansler, 59, has largely been out of the public eye since 2014, following a rocky run for his party’s nomination for governor. He said now that voters are not interested in past “political shenanigans” that caused that campaign to struggle, such as concern over his visit to a beach party where teenagers were drinking.

OPINION: RIGHTING THE WRONGS: Del. Darryl Barnes, chairman of the Legislative Black Caucus of Maryland, opines in a column for Maryland Matters that the state legislature has taken an historic step to make Maryland the first state to prioritize the awarding of sports wagering licenses to applicants that have significant Black or women ownership.

DISTRICT 14 LEGISLATORS FILE FOR RE-ELECTION: Sen. Craig Zucker and Dels. Eric Luedtke, Pam Queen and Anne Kaiser of District 14 have all filed for re-election to their respective seats in Annapolis in 2022, Steve Bohnel of Bethesda Beat reports in his Political Notes column.

WA CO LAGS BEHIND REST OF STATE FOR COVID VAXX: Tamela Baker of the Hagerstown Herald-Mail reports that while health authorities say the three authorized coronavirus vaccines have already proven effective against the spread and severity of COVID-19 in Washington County, county still lags behind the state average for the percentage of the population to be vaccinated.

BA CO STUDENTS RETURNING TO CLASSROOMS: For the first time since March 2020, COVID-19 restrictions were eased so any student could attend class in a school building four days a week, John Lee reports for WYPR-FM. Inside those buildings, everyone needs to be masked and practice social distancing according to Debbie Somerville, the schools’ health services coordinator.

OPINION: BA CO IG MUST BE SCARING POLITICAL INSIDERS: In an opinion column for Baltimore Brew, David Plymyer opines on the grilling by Baltimore County Councilwoman Cathy Bevins of Inspector General Kelly Madigan for her investigation of William “Chris” McCollum, a county employee. Plymyer writes “ … it was a jaw-dropping abuse of authority for Bevins to grill the IG on the investigation of a specific individual under the guise of a budget hearing. It was made much worse by the fact that that McCollum is a personal friend and political ally of Bevins – a bit of information that the councilwoman somehow never disclosed at the hearing.”

CRAB PICKINGS MAY BE SLIM: Pickings could be slim for Chesapeake Bay blue crabs this year, according to an annual survey with sampling that detected a 54% drop in the number of juvenile crabs. The estimate, conducted by the Virginia Institute of Marine Science and the Maryland Department of Natural Resources, comes with plenty of built-in uncertainty, reports Frederick Kunkle for the Post.