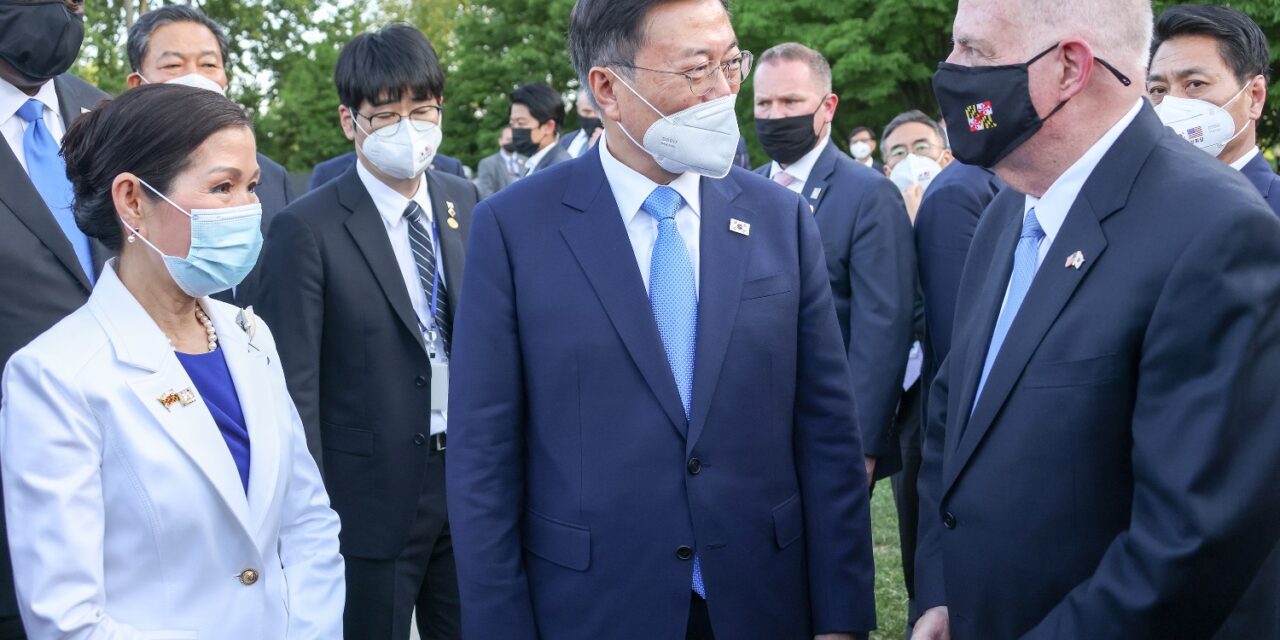 Gov. Larry Hogan and wife Yumi participated with the president of the Republic of Korea Moon Jae-In, center, in the groundbreaking for a wall of remembrance at the Korean War Veterans Memorial in Washington on Friday. Governor's Office photo

MARYLAND’S ONCE LAGGING VAXX RATES NOW UP: Maryland’s coronavirus vaccination rates, which lagged behind those in most states at the start, now ranks among the nation’s best, Alex Mann of the Sun reports.

WHAT YOU NEED TO KNOW ABOUT VAXCASH PROMO: What do you need to know about Maryland’s latest vaccination incentive, the VaxCash Promotion? If you’re a Maryland resident 18 and older and you’ve received one vaccine dose, you’re entered into the pool for a chance to win, write Alex Mann and Pamela Wood. That includes those already vaccinated and anyone who gets a shot before July 4. However, even if you’re a Maryland resident, you’re not eligible if you were vaccinated in another state or at a federal facility.

OPINION: INCENTIVIZE VACCINES: Bob Blubaugh opines in the Carroll County Times: “Yes, it seems ridiculous Maryland and the likes of Ohio and New York would have to have to start a lottery to entice people to do what they should’ve been doing anyway, but this is a pandemic that’s been going on for far too long. We have the ability to end it and should use all means at our disposal.”

COVID RATE CONTINUES TO DECLINE: Maryland’s coronavirus testing positivity rate continued its decline Sunday as state health officials reported fewer than 250 new COVID-19 cases for the third time in the past seven days, Phil Davis reports in the Sun. Seventeen more people were reported dead from COVID-19, bringing the state’s fatality count up to 8,816 since March 2020. Maryland health officials reported 244 new cases of the coronavirus Sunday, bringing the total number of infections up to 458,292 cases since March 2020.

SCHOOL SYSTEMS PUSH FOR IN-PERSON ED THIS FALL: Parents hesitant to send their children back to in-person school in the fall will find a phalanx of educators — from the U.S. Secretary of Education down to their school principal — nudging them to return their children to a school building, Liz Bowie of the Sun reports.

HARFORD MARCHING BAND MASK RULE FACES DELEGATE’S IRE: Harford County Public Schools’ ruling that marching band members who are not fully vaccinated must mask up during Independence Day parades is drawing opposition from state Del. Lauren Arikan, S. Wayne Carter Jr. reports for the Aegis. Making unvaccinated people, particularly children, wear masks in certain situations is akin to treating them “like they’re some kind of leper,” said Arikan, who has called for the resignation of the county’s school superintendent and health officer over a recent recommendation.

CARROLL GETS $4M IN RENT ASSISTANCE AID:. Carroll County government recently received over $4 million to assist those renting in the county who lost income or experienced rental hardship due to COVID-19, Madison Batemen reports for the Carroll County Times.

BAY WATERSHED CONTINUES TO PRESENT CHALLENGES: While 99% of Marylanders and 80% of Virginians live within the Chesapeake Bay watershed, only 30% of people living in Pennsylvania do. Because there are fewer state representatives in Pennsylvania within the watershed, it is more challenging for lawmakers in that state to advance policies to restore the Bay, compared to lawmakers in Maryland or Virginia, legislators said during a panel discussion this week, Elizabeth Shwe of Maryland Matters reports.

ANNAPOLIS TO MAIL BALLOTS TO EVERY VOTER: Every registered voter in Annapolis will be mailed a ballot for both the primary and general elections under a new policy approved by the city election board, Brooks DuBose of the Capital Gazette reports.

MD CONGRESSMEN SEEK $668M FOR 94 TRANSPORTATION PROJECTS: The seven Democratic congressmen from Maryland requested funding of $668 million for 94 transportation projects in the state. Some projects were requested more than once. Danielle Gaines of Maryland Matters writes about the projects.

TRANSIT CHIEF HEADS TO VANCOUVER: Maryland Transit Administrator Kevin Quinn’s departure for Vancouver comes at a key time for the agency, writes Bruce DePuyt for Maryland Matters. The system is working through a multi-billion dollar maintenance backlog. Numerous studies are underway to determine how to improve transit service, particularly in the Baltimore metropolitan region. And all of MDOT’s “business units” are operating under strain due to severe drops in ridership.