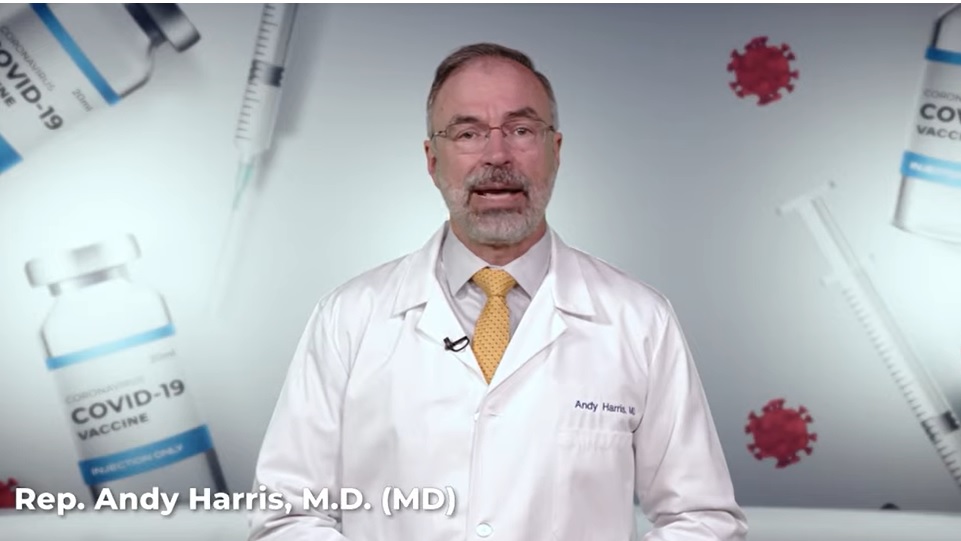 Rep. Andy Harris, M.D. was one of 11 Republican doctors in the U.S. Senate and House who made a video urging people to get vaccinated. They emphasized the safety of the vaccines and said getting them will help lift government restrictions. The Hill reported the story.. https://thehill.com/policy/healthcare/550452-gop-doctors-in-congress-release-video-urging-people-to-get-vaccinated

GLASSMAN SAYS HE WOULD HAVE BIPARTISAN APPEAL AS COMPTROLLER: In an interview with Bryan Renbaum of Maryland Reporter, Harford County Executive Barry Glassman said Monday that his bipartisan appeal and history of working across the political aisle make him well-positioned to become Maryland’s first Republican comptroller since 1900.

STATE TO ITS WORKERS: GET VAXXED, GET $100: Maryland is offering $100 to state employees who are fully vaccinated against the coronavirus, an effort to incentivize vaccinations as supply begins to outpace demand in some areas, Rebecca Tan and Lola Fadula report in the Post.

SUPREMES WON’T HEAR BUMP STOCK BAN CHALLENGE: The Supreme Court is declining to take up a challenge to Maryland’s ban on bump stocks and other devices that make guns fire faster. The high court on Monday turned away a challenge to the ban, which took effect in October 2018, according to the AP.

GROUP APPEALS CONTRACT FOR ROAD WIDENING: A losing bidder on a proposal to develop toll lanes for the Capital Beltway and Interstate 270 said Maryland improperly awarded the contract to companies with no construction expertise and an “unrealistic” financial pitch, according to state documents released Monday, Katherine Shaver of the Post reports.

MDOT TO STUDY MARC SERVICE FOR W. MD: Maryland’s Department of Transportation will study expanding MARC train service into Western Maryland under a new law the General Assembly passed last month, Madeleine O’Neill of the USA Today Network reports. The study is the result of a years-long effort by transit advocates in the state’s western region, including Sen. Paul Corderman, R-Washington, who sponsored a bill requiring the evaluation and ultimately got it passed as part of another piece of legislation.

B’MORE REMOVES 2,500 HOMES FROM TAX SALE: Baltimore will remove about 2,500 owner-occupied homes from the city’s annual tax sale — withdrawing them from the properties with liens that were slated to go to auction this month due to unpaid taxes and fees, Emily Opilo of the Sun reports.

MORGAN STATE GETS RECORD NO. OF APPLICATIONS: Morgan State University received more than 14,600 undergraduate applications for the 2021 fall semester as of April, the highest ever for the university, officials announced Monday, Marcus Dieterle reports for Baltimore Fishbowl.

MO CO EXPECTS HUNDREDS OF ASYLUM-SEEKING CHILDREN: As the United States faces another wave of unaccompanied children fleeing violence in their home countries and seeking asylum in the U.S., Montgomery County is preparing to receive hundreds of children, Brianna Adhikusuma reports for Bethesda Beat. As many as 3,000 children are expected to be released to the care of sponsors in the D.C.-Maryland-Virginia area this year.

OPINION: MO CO DEPT SHOWS DISDAIN FOR PRIVATE SCHOOLS: In a column for the Washington Examiner, Timothy Carney opines that the Montgomery County Health Department has shown animus for its private schools. He cites an email written on Aug. 1, 2020 by health officer Travis Gayles, who wrote, “The privileged class of the county is showing their behinds.” Gayles was dismissing objections from parents, teachers, and principals upset at his blanket closure of all nonpublic schools.

FREDERICK COUNTY CASES LOWEST SINCE OCT 2020: New coronavirus cases in Frederick County fell to their lowest level since early October on Monday, while the death toll remained unchanged for a sixth consecutive day, Greg Swatek reports for the Frederick News-Post. The 12 new cases reported by the Frederick County Health Department were the fewest in the county since the same number of cases were reported on Oct. 20.

OPINION: TOM PEREZ COULD BE TOP GOV CANDIDATE: Chances are, if Tom Perez runs for Maryland governor, he’ll be one of the Democratic frontrunners, contends Josh Kurtz for Maryland Matters. “He’s a man of substance; he’s got progressive bona fides; he has the national contacts to raise a lot of money; he’s well-known among Democratic activists in the state — though so not well known among the general populace. He’d probably have most of the state’s leading labor unions behind him, and he’s the rare politician who can appeal to both advocates and insiders.”