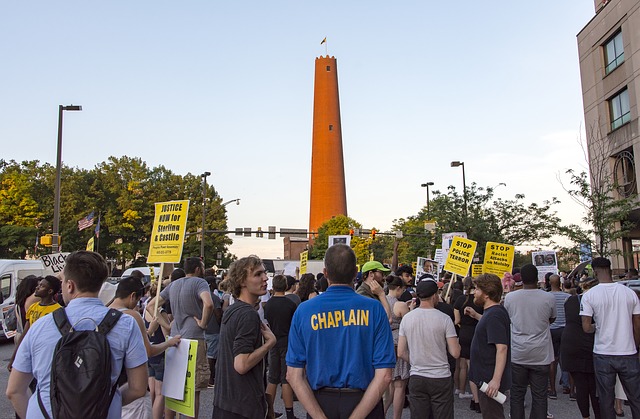 COLLEGE PARK, Md. — A bill in the Maryland General Assembly would revise police use of force requirements in the state — part of a growing initiative surrounding police reform nationally.

Conversations surrounding police reform have intensified with the death of George Floyd at the hands of police in Minneapolis, and the police-involved shooting of Jacob Blake in Kenosha, Wisconsin, among others, which sparked protests throughout the nation.

HB0139 and its cross-file, SB0626, sponsored by Del. Debra Davis, D-Charles, and Sen. Jill P. Carter, D-Baltimore, would set prohibitions and limitations on police officers’ use of force.

“This basically codifies what citizens should expect during their interactions with police,” Davis said at a Tuesday House Judiciary Committee hearing.

“It provides additional measures for the public to hold police who are bad actors accountable,” Davis added.

It stipulates that a law enforcement officer would be prohibited from using lethal force against a person unless the lethal force protects the officer or another person from death or serious physical injury, according to a state legislative analysis.

The bill also details that a law enforcement officer is prohibited from using lethal force if there’s substantial risk of injury to a third person and all reasonable alternatives haven’t been exhausted, according to a state legislative analysis.

“Between 2013 and 2020, 144 people were killed by police in Maryland in at least 16 different counties,” Carter said at a Feb. 4 Senate Judicial Proceedings Committee hearing.

“That data highlights that there is a problem despite our best efforts to enhance and encourage better training over many years, there is still a problem when it comes to police use of force,” Carter said.

The bill also details limitations and prohibitions on general use of force.

Under current law, a police officer’s use of force is defined by objective reasonableness, which means that the officer’s actions must be objectively reasonable keeping in mind the facts and circumstances of the situation.

However, under this bill, law enforcement officers may only use force if it prevents the imminent threat of physical injury to an individual or to effectuate an arrest, according to a state legislative analysis.

When an officer uses force, they must stop once they have gained control and the individual no longer poses an imminent threat.

Under the bill, by July 1, 2022, each local law enforcement agency must include funds in its annual budget for training, while also posting use of force data on its website and updating the information every six months by Dec. 31, 2021, according to a state legislative analysis.

This legislation is one of several single-issue bills supported by the ACLU of Maryland, the NAACP Maryland State Conference, and other advocacy groups lobbying for police reform within the state.

“There needs to be a foundation for use of force that establishes a piece of accountability,” Neill Franklin, a board member of the Law Enforcement Partnership, told Capital News Service.

“Central to achieving meaningful police reform is ending the use of excessive force,” Frosh said in a press release.

As police reform has become a more polarizing topic nationally, proponents of the bill noted that Maryland is one of a few states in the nation that doesn’t codify the use of force in state law.

“According to the National Conference of State Legislators, we are one of only nine states remaining without a standard like this in law,” Cary Hansel, chair of the Civil Rights Section of the Maryland Association for Justice said at a Tuesday House Judiciary Committee hearing.

However, both the Maryland Chiefs of Police Association and the Maryland Sheriffs’ Association voiced their opposition to the bill, expressing agreement with the idea in principle, but also addressing some concerns.

“The position of the police chiefs and sheriffs is that perhaps a better avenue for this would be a statewide use of force policy that would be put through the training commission,”
Chief John Nesky, president of the Maryland Chiefs Association, said at the Senate hearing.

“It would include the entire state, present the uniformity of philosophy and policy that we’re trying to get through the bill,” Nesky added.

The Police Training and Standards Commission is an independent body within the Department of Public Safety and Correctional Services.

Nesky said that implementing a statewide use of force policy through the police training commission would allow for increased flexibility and agility when evaluating police departments’ best practices.

He added that these practices may need to be altered quickly over time as police undergo tactical changes, in addition to differences in case law and technological advances.

“Use of force is difficult to get a feel of, use of force encounters aren’t linear,” Nesky told Capital News Service.

However, as police chief in Bowie, Maryland, Nesky is cognizant of the concerns that many people have surrounding police officers’ use of force — engaging in conversations with residents in an effort to maintain trust between the police and the community.

“Change is not easy, when you see change you want it to be reasonable and operational,” Nesky told Capital News Service.

A vote hasn’t yet been scheduled for either the House or Senate version of the bill.

“I’m confident that we will get a use of force bill to the finish line this session,” Davis said.