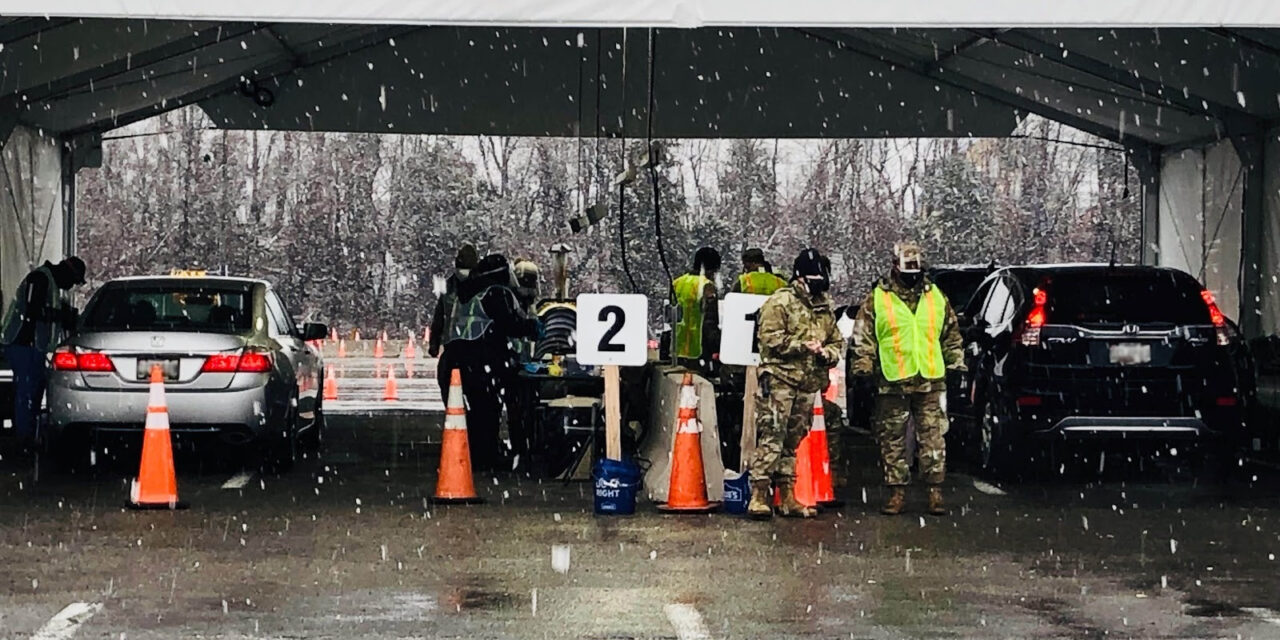 Vaccinations went on as planned in the light snow Sunday at the Six Flags America park in Prince George's County with the help of vaccinators from the Maryland Department of Health, Maryland National Guard, and Kaiser Permanente.. Governor's Office photo.

ARUNDEL MAY GET $50M FOR CAPITAL PROJECTS: Anne Arundel could see nearly $50 million for capital projects flow from the state, depending on how Gov. Larry Hogan’s capital budget is amended in the coming weeks, Olivia Sanchez reports for the Capital Gazette. His proposal includes more money for the new high school in Crofton, flood mitigation at Annapolis City Dock and an electrical infrastructure update for the prison complex in Jessup.

OPINION: PROTECT MARYLANDERS’ WELLS: In an op-ed for the Sun, environmental activist Darya Minovi and Del. Vaughn Stewart push for more state involvement in protecting well water, writing that House Bill 1069 “would create a well safety program in Maryland that helps cover the cost of well tests and remediation of contaminated wells, create a public database of well water test results, and require property owners to disclose results to tenants and buyers. Safe drinking water is a human right, and we must ensure all Marylanders have access to it. This program would be a step in that direction.”

ZIRKIN TESTIFIES AGAINST CHANGES TO SEX ABUSE BILL: Former Senate Judicial Proceedings chairman Bobby Zirkin (D-Baltimore County) returned to his former committee this week to testify against a high-profile bill that’s a follow-up to a measure he once championed, Hannah Gaskill writes in Maryland Matters.

BILL WOULD ALLOW STUDENT ‘MENTAL HEALTH DAYS:’ A bill in the General Assembly would grant Maryland school students excused absences for mental health reasons. Under the proposed law, students would be allowed to skip school once every quarter — without needing a doctor’s note, Tom Hindle of Capital News Service reports.

USM COLLECTIVE BARGAINING BILL: In a two-day hearing in the Maryland General Assembly that wrapped up Thursday, state lawmakers and employees of University System of Maryland institutions spoke on the passage of a bill that would allow a union representing multiple institutions to negotiate one “master agreement” with the system, Clara Longo de Freitas reports for the Diamondback.

OPINION: WHAT TYPE OF MARYLAND GOP DO WE WANT? In a column for Maryland Reporter, conservative Brian Griffiths opines, “Anybody who knows me or knows of me knows that I have been a conservative Republican my entire adult life. Unfortunately, too many in my party seem to be more interested in relegating the GOP to the ash heap of history than establishing a path to win elections, especially here in Maryland.”

CONFUSION & CHAOS INSIDE REGION’s VACCINE ROLLOUT: The story of how the D.C. region’s governments left millions of residents confused and fearful as they took on the most important public health challenge in decades is a tale of a complicated and faltering chain of command, in which Gov. Larry Hogan (R), Mayor Muriel Bowser (D) and Gov. Ralph Northam (D) acted on bad information and changing directives from the federal government, and local leaders scrambled to respond to late-arriving and shifting guidance from the states, Julie Zauzmer, Gregory S. Schneider and Erin Cox report for the Post.

1,566 NEW COVID CASES ON SUNDAY: Maryland health officials reported 1,566 new cases of the coronavirus and 20 more deaths Sunday, Phil Davis of the Sun reports. The additions bring the state’s total to 363,650 cases of COVID-19, the illness caused by the virus. As of Sunday, 7,170 people have died due to the disease or complications from it, according to the state health department.

STATE OPENS 2 ‘MASS VAXX SITES:’ Maryland’s efforts to protect residents from COVID-19 got a shot in the arm on Friday with the opening of two new mass vaccination sites, one in Prince George’s County and one in downtown Baltimore, Bruce DePuyt of Maryland Matters writes. Approximately 350 people were vaccinated on the first day of operations akin to what a new restaurant might do before throwing open the doors.

HIGH NUMBER OF CASES AT 3 JEWISH DAY SCHOOLS: Three Orthodox Jewish day schools in Baltimore County have reported large numbers of COVID-19 cases in the past two months, leading one middle school to shut down and move to virtual learning for a week, Liz Bowie reports for the Sun.

MO CO ‘REIMAGINING’ POLICING: Adam Pagnucco of Seventh State writes about proposals to ‘reimagine the police’ in Montgomery County. Those proposals include eliminating School Resource Officers, replacing them with counselors, and analyzing whether officers should always carry guns.

CARROLL EXPECTS $23M SURPLUS: Carroll County is expected to have a $23 million surplus in its budget this fiscal year according the county’s director of management and budget, Ted Zaleski. Much of the surplus is the result of short-term changes, said Zaleski, who cautioned that the expected surplus is not a guarantee, Yasmine Askari reports in the Carroll County Times.

BATTLE FOR NEW FBI HQ BEGINS ANEW: The General Services Administration is embarking on yet another phase of the long-stalled effort to relocate the FBI headquarters from its 45-year home in downtown Washington, teeing off a complex lobbying battle over the jobs and financial investment the project would entail. And officials from the District, Maryland and Virginia are already jockeying for the honor of hosting whatever is ultimately built, Aaron Gregg and Erin Cox of the Post report.