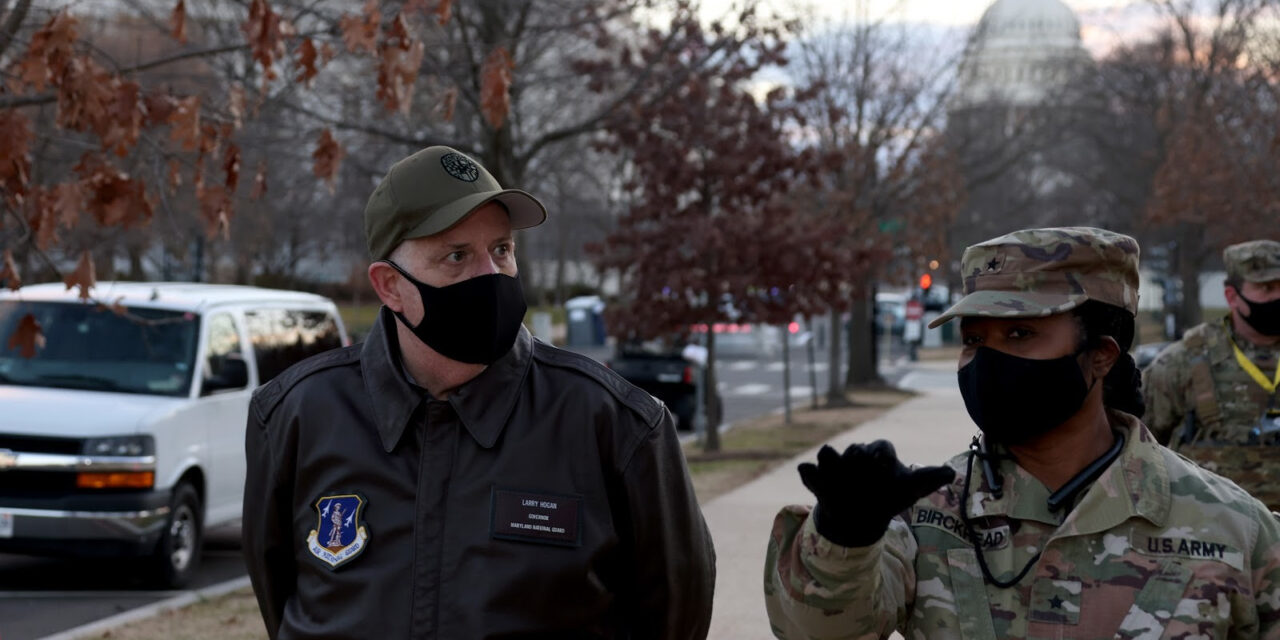 On Monday, Gov. Larry Hogan visited some of 500 Maryland National Guard troops deployed to Washington for the Inauguration. He was briefed by Army Brig. Gen. Janeen Birckhead, assistant adjutant general of the Maryland Guard. Birckhead is commander of the Task Force Capitol Grounds, in charge of more than 3,500 troops in D.C. Governor's Office photo

SPEAKER JONES: ‘BLACK AGENDA’ WOULD ATTACK SYSTEMIC RACISM: House Speaker Adrienne Jones (D-Baltimore County) says it’s time to dismantle the racist policies that by design have created a country where the net worth of a typical White family is 10 times higher than that of a Black family. And she plans to unveil what she is calling a “Black agenda,” one designed to attack systemic racial inequalities in housing, health, banking, government and private corporations, Ovetta Wiggins of the Post reports.

VACCINE DISTRIBUTION IN FITS & STARTS: Gov. Larry Hogan received a first dose of Moderna’s coronavirus vaccine Monday, declaring: “I really didn’t feel that at all,” reports Pamela Wood for the Sun. The state’s phased vaccination plan allows for vaccinations to ensure “government continuity” in Phase 1B, which the state entered Monday.

PUBLIC, PRIVATE SERVICES FOR MIKE MILLER: Maryland Senate President Emeritus Mike Miller, who died Friday, will lie in state in the rotunda of the State House on Thursday and Friday, Pamela Wood of the Sun reports.

BILL AIMS TO BAN STUDENT SEX OFFENDERS FROM PUBLIC SCHOOLS: State lawmakers could soon take an unprecedented step to make Maryland schools safer. The move comes after a FOX45 News investigation found a sex offender was taking classes at a Baltimore area high school. Members of the Baltimore County delegation say a bill in this year’s legislative session would make Maryland the first state in the country to ensure it cannot happen again, Chris Pabst reports for WBFF-TV.

10 LOBBYISTS BILL TOTAL OF $15M: Ten lobbyists reported billings of more than $15 million, a slight increase over 2019 according to reports filed with the Maryland State Ethics Commission released in December, Bryan Sears reports in the Daily Record. The combined reports for those top billing lobbyists represent nearly $3 in every $10 spent on lobbyists who reported billings of $50,000 or more and more than 27% of all billings reported by 563 people who reported any lobbying-related fees at all.

FELDMAN PONDERS COMPTROLLER RUN WITH LARGE WAR CHEST: Sen. Brian J. Feldman (D-Montgomery) hasn’t decided whether to run for comptroller in 2022, but if he does, he might begin the race as the candidate with the biggest war chest, writes Bruce DePuyt for Maryland Matters. In an annual fundraising report filed on Sunday, the five-term lawmaker listed $132,251 in contributions for the previous year, bringing his campaign balance to $346,319.

HOGAN GETS SECURITY BRIEFING FROM GUARD IN D.C.: Gov. Larry Hogan traveled to Washington, D.C., Monday and received a security briefing from soldiers of the Maryland National Guard deployed to defend the U.S. Capitol, Tim Prudente of the Sun reports.

FEMA DENIES MARYLAND EMERGENCY FUNDING: The Federal Emergency Management Agency has denied requests from Maryland and Virginia for an emergency declaration to cover expenses associated with responding to the Capitol riot and increasing security around President-elect Joe Biden’s inauguration, writes Fred Kunkle in the Post.

PUGH SEEKS CLEMENCY FROM TRUMP: Convicted former Baltimore Mayor Catherine E. Pugh is among those seeking clemency from President Donald Trump as he reportedly prepares to issue 100 pardons and sentence commutations on his final full day in office Tuesday, Justin Fenton of the Sun reports.

JIM LIGHTHIZER GIVEN NATIONAL HUMANITIES AWARD: At one end of Pennsylvania last week, members of the House of Representatives voted to impeach President Donald Trump for a second time, a historic first. At the other, former Anne Arundel County Executive Jim Lighthizer was accepting a prestigious medal from the president for his two decades of work to preserve and protect American battlefields, reports Lilly Price for the Capital Gazette.

JOHN ROEMER, FORMER ACLU HEAD, DIES AT 82: John C. Roemer III, a retired teacher and former head of the American Civil Liberties Union of Maryland, died Thursday of dementia at Woodholme Gardens in Pikesville. He was 82 and lived in Parkton, Jacques Kelly of the Sun reports.