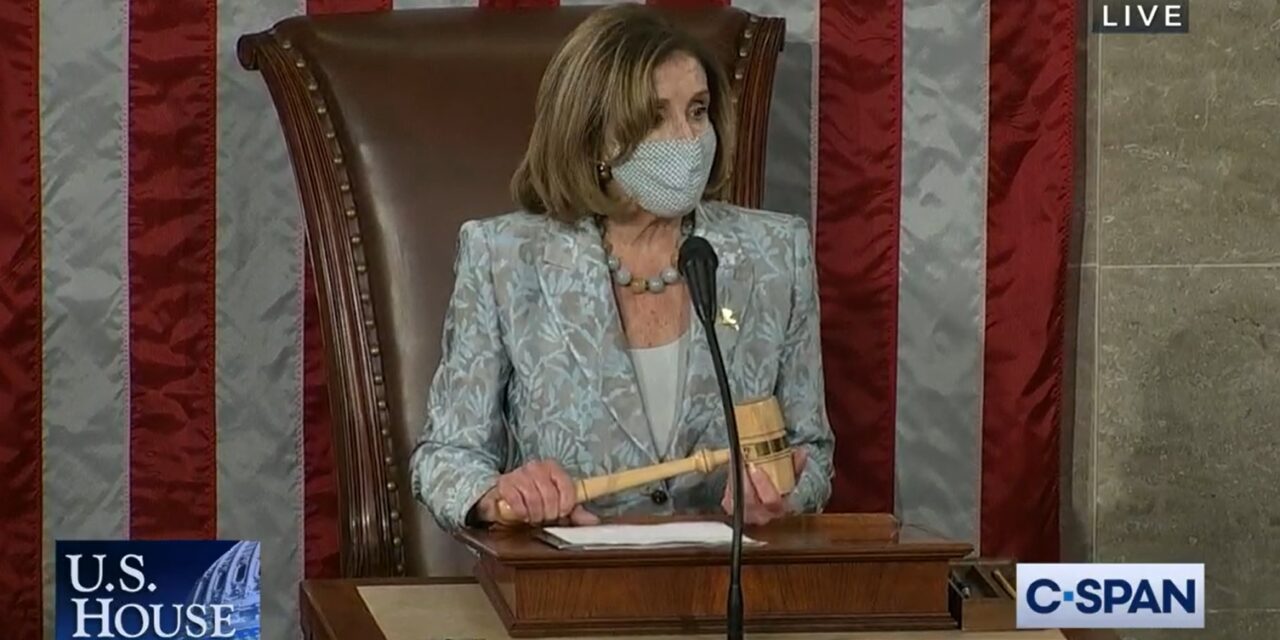 Rep. Nancy D Pelosi, D-San francisco, was narrowly reelected speaker of the U.S. House of Representatives Sunday by a vote 216 to 209. Pelosi grew up in Baltimore's Little Italy and her father, Tommy D'Alesandro Jr., was a congressman and mayor of the city. Screen shot from C-Span.

HOGAN CONDEMNS GOP SENATORS FIGHTING BIDEN ELECTION: Gov. Larry Hogan on Sunday condemned an attempt by Republican senators to overturn the results of November’s presidential election by voting not to certify the victory of President-elect Joe Biden, Christine Condon of the Sun reports.

LAWMAKERS ZOOM FOR CASH: Over the past few years, early January has seen about 60 fundraisers in the frantic days leading up to session; this year, the COVID-19 pandemic seems to have limited the volume somewhat, with about 40 on the docket between now and the Jan. 13 session kickoff, Josh Kurtz of Maryland Matters reports.

2021: YEAR OF KIRWAN? Lawmakers returning to Annapolis in two weeks may undertake a reshuffling of priorities in an education bill vetoed by Gov. Larry Hogan. Bryan Sears of the Daily Record reports that the Kirwan Commission’s overhaul of public education, formally known as the Blueprint for Maryland’s Future, calls for an increase in funding for public education. It was passed in the last days of a session that ended early because of the coronavirus infection.

HBCU FUNDING BACK ON AGENDA: As schools head into the spring semester and the Maryland General Assembly heads into its 2021 session, legislators are highly concerned about ending a 14-year-long legal battle alleging that Maryland has academically and financially prioritized its historically white institutions over its historically Black colleges and universities, Johanna Alonso of the Daily Record reports.

FATE OF STATE’s GOP U.S. ATTORNEY: With the inauguration of a new president on Jan. 20, Maryland’s top federal prosecutor must decide if he will seek to become a political anomaly like his predecessor — a Republican U.S. attorney who stays on in a Democratic administration, Jeff Barker of the Sun reports.

AFSCME, STATE FAIL TO REACH AGREEMENT: Maryland’s largest public employee union announced New Year’s Day that it had failed to reach an agreement with the state on a labor contract for the first time in more than 10 years, Christine Tkacik reports in the Sun. The deadline for bargaining was 11:59 p.m. Thursday.

STATEWIDE BODY CAM MANDATE CONSIDERED: Lawmakers are pushing for a statewide mandate requiring every police department in Maryland to equip officers with body cameras. But the cost for equipment and maintenance of the footage may be the biggest challenge, Ryan McFadden of the Capital News Service reports.

SUNDAY: 2,148 NEW COVID CASES, 27 DEATHS: Maryland reported 2,148 new cases of the coronavirus and 27 more deaths Sunday as the state’s average testing positivity rate rose above 9% for the first time since June, Phil Davis of the Sun reports. Sunday’s additions bring the state’s total to 285,319 cases of COVID-19, and 5,826 people who have died due to the disease or complications from it.

DEATHS HIGH AMONG SENIORS, VACCINES ARE RARE: The vast majority of deaths attributed to COVID-19 in Maryland are among seniors, reports Mike Sunnucks for the Easton Star Democrat. But the first waves of vaccinations are not going to seniors and are skewing younger.

OPINION: DEATH OF A LOVED ONE: In a commentary for Maryland Reporter, Dr. Shobhit Negi of Baltimore writes about the enduring and painful loss of his beloved mother to Covid-19, halfway around the world.

NEXT PHASES IN PUBLIC ED: While about half of students in the country will be able to go back to their school buildings this week, those in Central Maryland will remain glued to computer screens in their bedrooms and kitchens with no clear idea of when they might get back to in-person classes, Liz Bowie of the Sun reports.

OPINION: WILL GENERAL ASSEMBLY ATTACK LEARNING LOSS? In Part 1 of a two-part opinion piece for Maryland Matters, Kalman Hettleman opines that there’s “rare agreement among educators and policymakers that learning loss must be the paramount priority as schools try to recover from the pandemic. But, since the combatants in the education wars hardly ever declare a truce, the agreement over learning loss seems too good to be true — and it is.”

BA CO OFFICIALS DROP LONG-PLANNED SCHOOLS FROM CAPITAL PROJECTS: Baltimore County school officials stunned the school board when they recently released a list of proposed capital projects that does not include replacements for Dulaney and Towson high schools. On Tuesday, the board is expected to hear from the administration on why those two projects, which for years have been on the capital projects list, have now vanished, reports John Lee for WYPR-FM.

WHAT’s NEXT FOR TALBOT BOYS? The Talbot Boys statue is believed to be the only statue to Confederates still standing on public ground in Maryland. Even as the Talbot County Council continues narrowly to support the memorial — most recently, the body voted 3-2 in August to keep it in place — opponents have been growing more organized and developing a louder voice, writes Jonathan Pitts for the Sun.

HORSESHOE CRABS AND COVID-19: Maryland’s horseshoe crabs are harvested live and from them is extracted blood that has been the worldwide testing-standard for decades, saving countless lives from infection by screening everything from insulin shots to breast implants. And now the coronavirus vaccine. Tim Prudente of the Sun writes about the industry.

OPINION: THE LABEL IS ‘NO LABELS:’ Political opinionator Frank DeFilippo, in a column for Maryland Matters, opines that Gov. Larry Hogan’s ” ‘No Labels’ is a label. It’s a political variation on the idea of making the pitch by withholding the product. It’s camouflage. It’s duck-and-cover. It’s a cop-out.”  He contends: “The Bobblehead is a better idea. Bouncing around on a pick-up-truck dashboard next to the hip-jiggling girl in a hula skirt is a constant reminder of an existential presence.”

ONLINE ED LEADER TO TAKE OVER UM GLOBAL CAMPUS: A veteran online education leader and English scholar who has pushed for workforce-oriented programs serving students at all stages of adult life is poised to take over today as president of the University of Maryland Global Campus, Nick Anderson of the Post reports.

RASKIN’s SON DIES, MEMORIAL FUND SET UP: U.S. Rep. Jamie Raskin (D-Md.) and his family announced on Saturday the launch of a memorial fund in the name of Thomas Bloom Raskin, whose death was reported on Thursday. In the announcement of his son’s death at 25, Raskin described the family as devastated, Martin Weil of the Post reports.

JOHN O’BRIEN, FORMER STATE PERSONNEL SECTY, DIES AT 84: John F.X. O’Brien, who served in the Maryland General Assembly representing Northeast Baltimore and was later the state personnel secretary, died Dec. 21 of stroke complications at Brightview Senior Living in Rosedale. He was 84 and had lived near Loch Raven Reservoir, Jacques Kelly of the Sun reports.