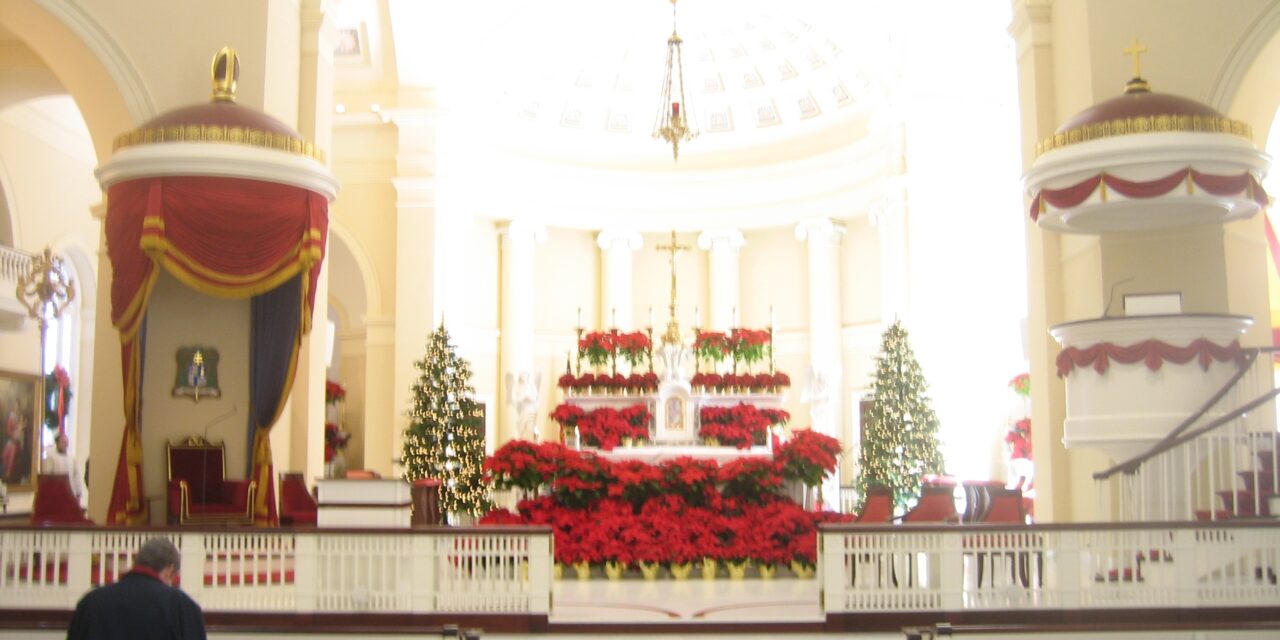 From an earlier Christmas, the Basilica of the Assumption in Baltimore, America's first Roman Catholic cathedral. Len Lazarick photo

STIMULUS DEAL SIGNED, FURTHER INCREASE TO BE CONSIDERED: U.S. Rep. Andy Harris (R-Maryland) would support increasing COVID stimulus checks from $600 to $2,000 if cuts are made from other spending areas to pay for them, The Easton Star-Democrat is reporting. President Donald Trump has signed the relief legislation but Congress is expected to vote Monday on a proposal to increase the amount to $2,000.

TENANTS FACE POSSIBLE EVICTIONS: Lawmakers will push for legislation that would give financially strapped tenants counsel at eviction hearings, Steve Lash reports for The Daily Record. “Funds for the free representation would be raised through an eight-fold increase in the filing fee landlords pay in district court eviction proceedings,” he writes.

DINING BAN CASE TO BE HEARD MONDAY: A judge in Anne Arundel County will hear arguments in the ban of indoor and outdoor dining on Monday morning, Abby Isaacs reports for WMAR. The judge had granted a temporary restraining order to keep the order from going into effect until the case could be heard.

BIKE STORES STILL BOOMING: While some industries have been hard hit by the coronavirus pandemic, some Maryland businesses like bike shops, fitness equipment stores, liquor stores and e-commerce have had an unexpected boom, Lilly Price reports for the Capital Gazette.

CITY’S 300THHOMICIDE MORE THAN A NUMBER: In a heart-breaking story in the Sun, Tim Prudente tells about how the spokeswoman for the Baltimore state’s attorney’s office prepared for the regular barrage of questions about the city’s 300th homicide, a marker that represents to some the level of violence in the city. Then it turned out to be a man she had loved, the father of her children.

WASTEWATER TESTING HOPED TO PREVENT OUTBREAKS: Universities in Maryland have been monitoring the coronavirus through their wastewater, and now the state of Maryland is following suit with a statewide wastewater testing program that will focus on nursing homes, prisons and low-income housing developments, Ovetta Wiggins reports for the Post.

STUDENT LEASE DEAL REACHED: Several Maryland universities have reached a settlement with the Maryland Economic Development Corp that will allow some student leases at privately-managed on-campus residence halls to be cancelled, Taylor Deville reports for Baltimore Sun Media. Previously, the students had been told they would be legally bouned to the leases, even if they did not move into their units due to the COVID-19 crisis.

OFFERING MENTAL HEALTH SUPPORT: With COVID-19 cases surging and a difficult winter expected, state and local officials as well as health care professionals are tuned in to rising mental health concerns, Brian Witte reports for the AP. The problem can become more acute during the holidays, and officials are urging people to reach out and access resources when they need them.

COURT WILL OPERATE UNDER COVID RESTRICTIONS: The Maryland court system’s current pandemic limits will remain in place until mid-March, Mike Lewis reports for the Hagerstown Herald-Mail.

HOGAN REFLECTS ON STATE RESPONSE: Gov. Larry Hogan said the nation’s governors came together better than Washington when it came to responding to the COVID-19 crisis, David Cohen reports for Politico.

STUDENT PAGE PROGRAM GOES VIRTUAL: Student pages will be participating virtually in the General Assembly session this year, their gray blazers absent from the chambers of Annapolis, Alex Mann reports for the Sun.

LAST PUGH ASSOCIATE SENTENCED: Federal prosecutors are seeking two years in prison for an associate of former Democratic Mayor Catherine Pugh, last person to be sentenced in the case, Justin Fenton reports for the Sun. Roslyn Wedington is scheduled to be sentenced for tax fraud related to her position as executive director for a nonprofit job training center where Pugh was on the board.

HOCO MAN THREATENED CONGRESSIONAL MEMBER: A Howard County man has been charged in U.S. District Court with making threats against a member of Congress in a voicemail, Danielle Gaines reports for Maryland Matters. The member of Congress was not identified by federal prosecutors.

PUBLIC SERVICE AWARD IN MEMORY OF CLAYTON MITCHELL: Comptroller Peter Franchot has announced winners of the Clayton Mitchell awards for distinguished public servants, Daniel Divilio reports for The Easton Star-Democrat. He highlighted the careers of those who have served in the Capitol, State House and local government. The award was created to honor the late R. Clayton Mitchell Jr., who died last year and had served as speaker of the House of Delegates.