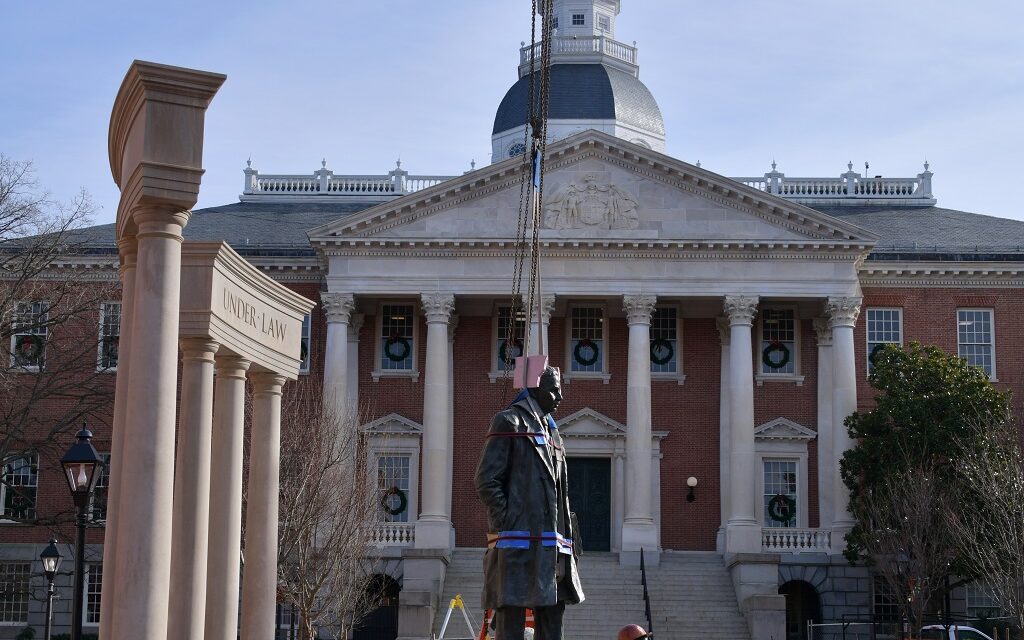 The statue of Supreme Court Justice Thurgood Marshall to its place in Lawyer's Mall outside the State House Dec. 17. Governor's Office photo

MD JOBLESS RATE DROPS: Maryland added 24,100 jobs in November and the state’s unemployment rate decreased from 7.8% to 6.8%, according to preliminary data released by the U.S. Department of Labor’s Bureau of Labor Statistics on Friday morning, Bryan Renbaum of MarylandReporter.com reports.

HENRIETTA LACKS ACT HEADS TO TRUMP FOR SIGNATURE: A bill inspired by the late Henrietta Lacks, a Baltimore County woman whose cells were used for medical research without her consent, is headed to President Donald Trump’s desk following a push by Maryland lawmakers, Pamela Wood of the Sun reports. The act would require the federal government to publish a report on government-funded cancer research trials, including the amount of participation by underrepresented populations and the barriers to participation.

2,054 NEW COVID CASES, 37 MORE DIE: Maryland reported 2,054 new cases of the coronavirus and 37 more deaths Sunday. Sunday’s additions bring the state’s total to 250,808 cases of COVID-19, the illness caused by the virus, and 5,279 people who have died due to the disease or complications from it, Phil Davis of the Sun reports.

COVID ALTERS ARUNDEL DELEGATION PRIORITIES: While the coronavirus pandemic meant there were no rentals at the Anne Arundel County Fairgrounds in 2020, a key source of income for the organization that runs a landmark site in Crownsville, demand for the outdoor running track at Lindale Middle School in Linthicum went up as people sought outdoor public space to exercise. These were among issue explained to Anne Arundel County delegates and senators Wednesday as they accepted community proposals for funding during the coming General Assembly session.

B’MORE TARGETS HISPANIC COMMUNITY FOR COVID AID: Baltimore is stepping up its assistance to members of the Hispanic community suffering from the coronavirus, giving them priority for financial assistance, Emily Opilo of the Sun reports. In April, the city founded an Emergency Relief for Immigrant Families fund, which has helped city residents affected by the pandemic who are not eligible for federal benefits due to their immigration status.

OPINION: OUTRAGE! HOGAN GIVES EXEMPTION FOR INTERNATIONAL TRIP: In a column for the Carroll County Times, Bob Blubaugh opines that he is extremely concerned about Gov. Larry Hogan giving a free pass to allow someone “to travel across international borders and into Maryland in what has the potential to be the single-worst super-spreader event of this entire COVID-19 nightmare. Of course, I’m referring to the executive order exempting Santa Claus, his affiliated elves and reindeer from traveler testing and quarantine requirements.”

OPINION: POLITICAL INFLUENCE CROSSES PARTY LINES: Ken Decker, who served as a city manager and county administrator in Maryland for almost two decades, in a commentary on the Roy McGrath controversy for Maryland Reporter writes that “Political influence is not new to MES nor is it unique to any one political party. It’s a credit to MES employees that they have been able to provide capable services while dealing with the inevitable political ear-bending and arm-twisting (from both state and local officials).”

***KEEPING UP THE GOOD WORK: We’re in the final days of our fifth annual matching grant appeal that is over New Year’s Eve. We’re really grateful to the more than 200 donors who have responded so far. We’re grateful too for the kind words that subscribers have included with their donations. Comments like this one Sunday from Alice A. in Finksburg: “Thanks and please keep up your important work.” Make your tax-deductible contribution online to our nonprofit news website today.***

BLACK MD POLICE CHIEFS REFLECT ON 2020: Over the past few months, Maryland Matters spoke with other Black police chiefs, sheriffs and representatives of state and local law enforcement agencies to gauge their sense of 2020’s civil rights inequities and how policing needs to change to meet the challenges America faced in 2020. Hannah Gaskill writes the story.

OPINION: SMALL BUSINESS NEEDS HELP: Small business owner Imam McFarland, in a commentary for Maryland Reporter, writes that she told the Senate Committee on Small Business and Entrepreneurship last week that “time is running out for small businesses like mine. Unless Congress acts immediately to provide emergency relief, Main Streets across America — including in my county of Prince George’s — might as well hang up a giant ‘Out of Business’ signs come January.”

CREATIVE POLITICAL FUND-RAISING: Technical glitches aside, the coronavirus pandemic has forced political candidates in the state to be creative with their fundraising efforts, which are key to successful campaigns. And though November’s election has passed, General Assembly members are furiously raising money ahead of the legislative session in January, during which they can’t do so, Ben Leonard of the Sun reports.

TRONE UP FOR SEAT ON APPROPRIATIONS: Rep. David Trone is headed to a coveted seat on the House Appropriations Committee in the 117th U.S. Congress. Speaker Nancy Pelosi (D-Calif.) announced Thursday that Trone has been nominated for appointment to the committee for the upcoming session, Danielle Gaines reports for Maryland Matters.

HARRIS’s LAST TERM? HE REMAIN A TRUMP LOYALIST: Donald Trump’s repeated election fraud claims have an ardent backer in U.S. Rep. Andy Harris, who is in lockstep with the president as the Maryland Republican begins what he once promised would be his final congressional term, Jeff Barker of the Sun reports. As he prepares for the start of his sixth term next month, Harris, 63, is the only Republican in the Maryland delegation, its only supporter of Trump’s efforts to overturn what the president baselessly says was a rigged election, and the only one who pledged to limit his tenure in the House.

CLIMATE POLL: MO CO VOTERS WANT CLIMATE PLAN SOON: More than 80% of Montgomery County voters are concerned about global warming and 75% want to see their county council adopt a climate solution plan within the next six months, according to a recent poll by the Chesapeake Climate Action Network, Elizabeth Shwe of Maryland Matters writes.

NEW MACo BOARD TAKES OFFICE: The new Board of Directors of the Maryland Association of Counties was installed on Friday, with Caroline County Commissioner Wilbur Levengood as president, Virginia White writes in Conduit Street.

$50 MILLION FOR ENTERPRISE: While coverage has focused  on MacKenzie Scott’s $85 million in grants to three Maryland HBCUs, there has been little attention to her $50 million grant to Enterprise Community Partners of Columbia, a nonprofit that focuses on access to affordable housing.and economic mobility. Enterprise was founded by the late Columbia developer Jim Rouse and his wife Patti.

JAMES CUNNINGHAM, B’MORE POLITICAL ANIMAL, DIES AT 53: James F. Cunningham, an operations manager and auditor who savored politics and liked spending weekends on his boat, died Dec. 8 of cancer at his home in Schwenksville, Penn. He worked in the campaigns of his uncle, City Councilman Bill Cunningham, Mike Curran, Joseph Curran, Jack Lapides, Frank Gallagher and other local politicians. The former Ednor Gardens resident was 53, Fred Rasmussen of the Sun reports the story.