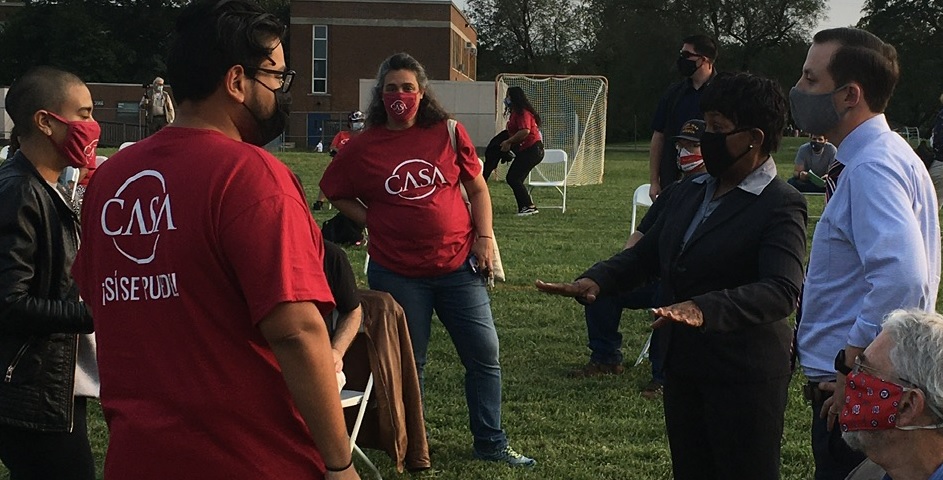 LAWMAKERS SEEK TO CUT HEALTH CARE DISPARITIES: Maryland’s state lawmakers teamed up with health care advocates and community leaders on Wednesday to urge the passage of legislation that is aimed at reducing disparities in care and would be funded by a 1% increase in the state’s alcohol tax, reports Bryan Renbaum of Maryland Reporter.

GA LEADERS SAY NO TO SPECIAL SESSION: The president of the Maryland Senate was there. The speaker of the House of Delegates was there. The other 46 senators and the other 140 delegates – except for two lone wolves – were missing in action. Such went the rump Special Session of the People’s General Assembly organized by the most progressive groups of the Democratic left who met Wednesday evening to show that the legislature could meet while masked and social distancing, reports Len Lazarick for Maryland Reporter.

SOME JOBLESS MARYLANDERS WITHOUT BENEFITS, HELP: More than six months after the coronavirus pandemic triggered a deluge of unemployment claims in the Washington region, some jobless Marylanders are still experiencing major problems getting benefits and have endured weeks — or months — without the payments they are supposed to receive. The main frustration, they say, is they cannot get anyone to answer their calls, reports Ovetta Wiggins in the Post.

GA PANEL TO PROBE BIG PAYOUT: A General Assembly committee with the power to subpoena witnesses has scheduled a special meeting next Wednesday, as lawmakers say they still have questions about a six-figure payout made to the governor’s former chief of staff, Pamela Wood of the Sun reports.

BILLS FOCUS ON POLICE ACCOUNTABILITY, REFORM: The Senate Judicial Proceedings Committee released a series of bills Wednesday evening that are set to be discussed at a virtual hearing next week, all of which focus on police accountability and reform. Hannah Gaskill explains the bills in this report for Maryland Matters.

FERGUSON: VACCINE APPROVAL PROCESS TO SLOW TREATMENT: A vaccine for COVID-19 might not be available to most Marylanders for six to eight months after a treatment receives emergency authorization from the federal government, according to Maryland Senate President Bill Ferguson. Bryan Sears writes the story for the Daily Record.

COVID HOSPITALIZATIONS SEE ONE-DAY DROP: The number of Marylanders currently hospitalized due to coronavirus dropped by 24 patients on Wednesday, the same amount that the metric increased by on Tuesday, state data show. Marcus Dieterle of Baltimore Fishbowl reports that on Tuesday, Maryland saw the largest one-day increase in COVID-19 hospitalizations in about a month and a half. Maryland’s current COVID-19 hospitalizations have returned to 347 — the same amount recorded on Monday.

FREDERICK RECORDS 122 COVID DEATHS: Frederick County recorded its 122nd death attributed to the novel coronavirus Wednesday, Greg Swatek of the Frederick News-Post reports. After going long stretches this summer without any virus-related deaths, the county has now reported eight since Aug. 21. Prior to that, it had not registered one since July 29.

PURPLE LINE PROBLEMS CAST DOUBT ON ROAD WIDENING: Louis Peck writes about the history and future of the Purple Line for Bethesda Beat: “The idea was conceived in the early 1980s as what one local politician referred to as ‘a Toonerville Trolley, a very modest little thing that just went back and forth all day long’ on an old railroad bed between Bethesda and Silver Spring. It morphed into a far grander plan … the unhappy end to the public-private partnership (P3) arrangement under which the Purple Line was being built has cast a shadow over an even larger proposed P3 in the region — the widening of I-495 and I-270.”

***Moving Toward Energy as a Service: In an era where budgets are tight, cost saving measures have become critical to maintaining viable operations of facilities. This FREE webinar on September 17th examines the energy as a service business model and how it can be used to upgrade critical infrastructure, better manage costs of consumption, and monetize assets through a comprehensive package of innovative strategies to gain efficiency savings, increase resiliency, and remove risks, while retaining long term decision-making authority. ***

CAMDEN YARDS TO BE USED AS VOTING CENTER: The Orioles announced Wednesday they will open Camden Yards in November for use as a voting center. The team said in a news release that it is finalizing a deal with the Baltimore City Board of Elections for the use of stadium space on Election Day, Emily Opilo reports for the Sun. As part of the team’s Voter Up campaign — and a broader Major League Baseball effort — the Orioles also will encourage voter engagement this fall and advertise key election dates to help Marylanders exercise their right to vote, the team said.

ST. MARY’s SINGLE VOTING CENTER DERIDED: A plan to have just one early voting center for all of St. Mary’s County in the upcoming election is voter suppression, a local lawmaker says, charging that the county’s board of elections is deliberately making it harder for people of color to vote, Bennett Leckrone reports for Maryland Matters.

B’MORE OKs TAKING $25M FROM RAINY DAY FUND: Baltimore City’s spending board greenlit a rare $25 million emergency withdrawal from the Rainy Day Fund Wednesday to balance a budget that had to be rewritten because of the financial impact of the coronavirus pandemic, Emily Sullivan reports for WYPR-FM.

MO CO HEALTH CHIEF GETS RACIST MESSAGES: Montgomery County’s top health official said he has received derogatory and racist messages from community members frustrated about his response to the coronavirus pandemic. Gayles, 41, said he hasn’t received any threats, but that many of the messages have contained racist or homophobic slurs. Many messages have alleged that Gayles, who is Black, was “a diversity hire” and is not qualified for the job, he said. Caitlynn Peetz writes the story for Bethesda Beat.

WHERE WOULD TALBOT BOYS GO? If the Talbot Boys statue is removed from the courthouse lawn, where will be its final resting place? The most obvious perch is in the hands of local historians — though none appears eager to house the controversial memorial for fear of being cloaked in its divisive aura, reports Candice Spector for the Easton Star Democrat.

CONGRESSMEN INTERCEDE ON DEPORTATION THREAT: Family members say an undocumented worker from Indonesia who has lived and worked and raised a family over 30 years in the United States was lured from his home and work on church grounds in Silver Spring by ICE agents who lied to him, Meagan Flynn reports in the Post. He now awaits deportation and Maryland members of Congress are trying to help him.

CUMMINGS BOOK ADDRESSES TRUMP TWITTER ‘PAIN:’ In the months before his death, U.S. Rep. Elijah Cummings wrote that he endured “pure pain” from repeated Twitter attacks by President Donald Trump — whom he once wanted to trust — but resolved not to be baited into responding in anger. Jeff Barker writes about the Cummings’ posthumously published book, “We’re Better than This.”

SALISBURY MAN TO PAY REPORTER $100,000 FOR TWEET SEIZURE: A Salisbury supporter of Donald Trump has agreed to pay $100,000 to a journalist and outspoken critic of the president to whom the backer sent a tweet containing a message intended to cause him to suffer a severe epileptic seizure, which he did, Steve Lash reports for the Daily Record.