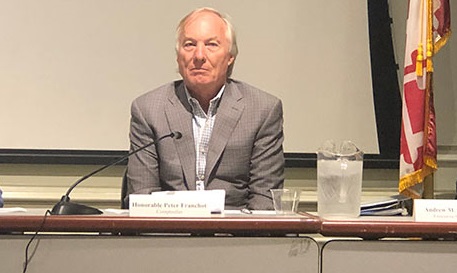 FRANCHOT: STATE BUDGET IN BLACK; SHOULD AID SMALL BUSINESS: Despite the job losses and business restrictions due to the coronavirus pandemic, Maryland’s state government finished its most recent budget year in the black. The state announced Wednesday that for the budget year ended June 30, it took in less money in taxes than it had planned on before the pandemic. But the tax revenue still came in above the amount collected the year before, Pamela Wood of the Sun reports.

MORE JOBLESS BENEFITS AVAILABLE: An estimated 300,000 unemployed Marylanders will receive as much as $1,800 in long-awaited benefits as early as this weekend, Jean Marbella of the Sun is reporting. The payments come 1½ months after those thrust out of work by the coronavirus pandemic lost the extra $600 a month they had been receiving in federal assistance, leaving many increasingly desperate to pay their rent and other bills.

USM WARNS OF BUDGET CUTS, LAYOFFS: The University System of Maryland is bracing for a $500 million coronavirus-related budget cut this school year and warning faculty and staff that layoffs could be on the horizon, Chloe Goldberg of the Diamondback reports.

LINKING COLLEGE RESEARCH LABS PAYS OFF: Bruce DePuyt of Maryland Matter reports that a 2016 decision to link the research labs at the University of Maryland College Park with those at the University of Maryland at Baltimore is paying dividends in the competition for federal COVID-19 research dollars, a top education official told a science advisory panel on Wednesday. “Now we’ll be ranked together by the (National Science Foundation) in the U.S. rankings of research universities — and together this makes us [an] over $1 billion public research enterprise,” said Laurie Ellen Locasio, vice president for research at the two institutions.

MARYLAND 7th IN DIVERSITY: Sen. Jill Carter (D-Baltimore City) said she is not surprised that a recent Wallet Hub survey ranked Maryland as one of the most diverse states in the nation, reports Bryan Renbaum of Maryland Reporter. Carter added: “In Baltimore City alone you have Sandtown and so many other areas in West and East Baltimore that have been economically gutted and depressed. And then you have in my own district Roland Park and Wyndhurst-which is a very affluent area.” Carter said she hopes that as Maryland grows even more diverse that the economic playing field becomes more level.

B’MORE MAIL-IN BALLOTS CONTAIN ERROR, INSERT FIX: Voters in Baltimore must navigate an additional challenge when casting their ballots this fall: Ballots being printed for city voters contain a mistake that election officials say was discovered too late to fix, Emily Opilo and Talia Richman of the Sun reports. The city’s voters will receive an insert with corrected language when they receive their mail-in ballots and notices will be posted in all city voting booths.

FEDEX FIELD EYED FOR VOTING CENTER: FedEx Field in Landover could be transformed into a polling center for Prince George’s County voters on Election Day. Before voting booths, ballots and elections judges converge at the more than 80,000-seat stadium, the Maryland Board of Elections plan to meet Friday, Sept. 11 and must grant formal approval, William Ford reports for the Washington Informer.

METRO PLANS SERVICE CUTS: Metro’s bad week got worse Wednesday when the transit agency said it had started planning service cuts because fare revenue continues to lag due to the pandemic and federal relief aid is running out, Justin George of the Post reports.

MO CO COVID CASES UP .3%: The number of coronavirus cases in Montgomery County rose 0.3% on Wednesday, bringing the total to 20,838, according to the Maryland Department of Health. Seventy-two new cases of COVID-19 were reported on Wednesday, Caitlynn Peetz reports for Bethesda Beat.

CARROLL CASES UP BY 10: Ten new COVID-19 cases among Carroll County community members were reported Wednesday, though the health department cautioned that the day’s data might be incomplete, Brian Compere of the Carroll County Times reports.

FREDERICK STUDENTS MEET IN SMALL GROUPS: The first small groups of students have already begun meeting within the buildings of Frederick County Public Schools, according to an update given to the Board of Education Wednesday. Katryna Perera of the Frederick News-Post reports that when the board settled last month on the final version of the reopening plan for the fall semester, it came with a condition that FCPS staff identify small groups of students to receive face-to-face instruction.

UM PRESIDENT TALKS SOCIAL INJUSTICE, PANDEMIC: University of Maryland President Darryll Pines gave his first State of the Campus address at the University Senate’s first meeting of the school year Tuesday, addressing how the coronavirus and social injustice — which he calls the two pandemics — have created a need for structural changes on campus, Lyna Bentahar of the Diamondback is reporting.

DEBATE DURING MO CO JUDGES RACE TURNS LIVELY: A question from candidate debate moderator Ashwani Jain on how best to select circuit court judges laid bare a major source of tension in this year’s contest. It prompted the four so-called “sitting judges” in Montgomery County who are seeking to retain their seats to vigorously defend the 50-year old “vetting” process that led to their initial appointment to the circuit court bench. They also took aim at the qualifications of the fifth candidate in the race who advanced in this year’s Democratic primary, reports Louis Peck for Bethesda Beat.

OPINION: IGNORE RHETORIC; FIND NEW APPROACHES TO POLICING: In a column for the Sun, Rushern Baker,  the former Prince George’s County executive, opines that “every moderate Democrat I know cringes when they hear the phrase ‘defund the police,’ and think of all the swing voters they may lose based on rhetoric. … As daunting as it is — especially during a pandemic and a recession — to take a new approach that can deliver the results that proponents of defunding the police desire, it can be done. And it can be done successfully with long-term impact.”

HARFORD PROSECUTOR ACCUSED OF WITHHOLDING REPORT IN MURDER CASE: Then-Harford County State’s Attorney Joseph I. Cassilly withheld a potentially exculpatory report from defense counsel in a long-running first-degree murder case and then misled the post-conviction court about its existence, Maryland’s bar counsel has alleged in a disciplinary petition filed Tuesday in the state’s top court, Steve Lash reports for the Daily Record. 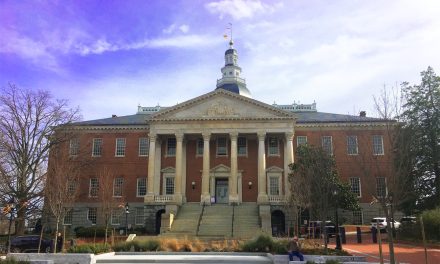