JOB RATE ENCOURAGING; CAUTION URGED: Maryland’s business leaders said the state’s latest employment numbers are encouraging but warned that significant hurdles remain on the road to economic recovery, reports Bryan Renbaum for Maryland Reporter. Maryland added 68,300 jobs in June and that the state’s unemployment rate dropped from 9.9% to 8%, according to preliminary data from the U.S. Department of Labor’s Bureau of Labor Statistics.

SURGE IN MD COVID CASES: Maryland experienced a surge in coronavirus cases Sunday, with health officials reporting the state’s highest level of infections in seven weeks, Mary Carole McCauley of the Sun reports. The 925 new cases of the novel coronavirus represents a jump of nearly 11% in just one day. It is the greatest number of cases since May 30, when Maryland grappled with 1,027 new COVID-19 infections. State health officials also reported nine new deaths Sunday from the pathogen.

OPINION: WHAT WAS HE THINKING? “Has he been to a bar?” ask the editorial board of the Sun as it criticizes Gov. Larry Hogan’s actions when it came to reopening bars throughout Maryland and his response when Covid-19 numbers began rising among young people. “What did he think was going to happen?”

PURPLE LINE FIRMS THREATEN TO QUIT: Nearly halfway through construction, Maryland’s $2 billion Purple Line project has teetered on the verge of collapse since May, writes Katherine Shaver for the Post. Unless an agreement on who will pay $755 million in cost overruns is reached with the state by Aug. 22, both the construction contractor and the consortium of companies managing the 16-mile light-rail project have said they will quit.

BUT CONSORTIUMS SHORTLISTED FOR TOLL LANE WORK: All four of the private-sector teams seeking to build “express toll lanes” in the Washington, D.C., suburbs have cleared their first hurdle. Bruce DePuyt of Maryland Matters writes that the Maryland Department of Transportation and the Maryland Transportation Authority announced late Friday that the four consortia who sought “shortlist” status have been granted it.

GROWING CONSENSUS: RESUME IN-PERSON CLASSES: In the raging national debate over whether to reopen schools, advocates on both sides are basing their arguments on a range of factors: political, economic and emotional. But there is a growing consensus in the public health and scientific community that schools should resume in-person classes this fall — particularly in states such as Maryland, where cases have not spiked as they have elsewhere, Liz Bowie and Meredith Cohn of the Sun report.

WA CO PREPS FOR ONLINE LEARNING: With just weeks before the start of the new school year, Washington County Public Schools is working to make virtual learning a success. Sherry Greenfield of the Hagerstown Herald-Mail reports that this includes preparing the hundreds of teachers that will guide students through what was for some a challenging process this past spring.

MO CO TEACHERS UNION BLAST REOPENING PLAN: The union representing Montgomery County Public Schools teachers tore into the district on Friday over its school reopening plans, saying they are unsafe, Caitlynn Peetz writes for Bethesda Beat. The plan “is wholly inadequate to protect the health and safety of students and staff,” the Montgomery County Education Association said in a statement it issued late Friday morning.

OPINION: A TEACHER’S 10 REASONS NOT TO REOPEN: Hannah Glaser, in an opinion piece for Bethesda Beat, offers up 10 reasons why some teachers are concerned about re-opening schools during the pandemic, including that cleaning surfaces isn’t enough to control the spread and teacher-centered instruction will be less effective.

PREPPING FOR COLLEGE STUDENTS: Five days a week, Relford Matthews reports to dormitories at the University of Maryland Eastern Shore to paint, fill holes in the walls and install Plexiglass dividers meant to minimize the spread of COVID-19. Lots of the time, Matthews works by himself. So, for the moment, the 64-year-old maintenance worker feels safe at his job. But he knows the storm is coming. The Students, Christine Condon of the Sun reports.

ATTY PANEL SEEKS SANCTIONS FROM LAWYER: The Maryland attorney grievance commission is seeking sanctions against well-known medical malpractice lawyer Stephen L. Snyder, alleging in a public filing that he promised to keep quiet about a patient’s death and other problems inside the University of Maryland Medical System transplant unit in exchange for up to $50 million, Justin Fenton and Meredith Cohn of the Sun report.

JUDGES VOTED OUT IN SURPRISE UPSETS: A political upheaval of sorts occurred last month in Maryland’s primary election for Circuit Court judges — one little noticed by the public, but not ignored by the state’s legal establishment, Dan Rosenzweig-Ziff of the Post reports. While normally sitting Circuit Court judges cruise to victory in the primaries, three challengers surged to surprise wins in the Democratic primaries in Prince George’s and Montgomery counties.

PG COUNCIL WRESTLES OVER TAXES: Unemployment has surged in Prince George’s County. The suburb leads Maryland in coronavirus infections. Lawmakers are worried that another housing crisis is looming. Against that grim backdrop, the county council last month ignited a fierce debate about taxes, reports Rachel Chason for the Post.

JUSTICE PROTESTS CONTINUE: As cars swerved through Ellicott City’s Main Street for the usual Saturday night rush, protesters and organizers from local social justice organizations packed a nearby parking lot as part of a demonstration against Howard County’s contract with U.S. Immigration and Customs Enforcement, Ana Faguy of the Howard County Times reports. A video tops the article.

OPINION: SENATE MUST EXTEND BENEFITS TO WORKERS: U.S. Rep. Dutch Ruppersberger, in a column for the Sun, urges the Senate to back extending federal aid to workers, writing that there “is a looming disaster ahead — in four days to be exact. … This is Congress’ deadline to extend the extra $600 a week in federal funding that has been tacked on to unemployment checks since the beginning of the COVID-19 pandemic but expires July 31. … nearly 671,000 Marylanders are receiving the benefit … If allowed to expire, these Marylanders will see an overnight income loss of 64%.”

EVICTIONS NEXT PUBLIC HEALTH CRISIS: In March, Gov. Larry Hogan put a moratorium on evictions that expires on July 25, after which tenant advocates expect a wave of evictions. Meredith Greif, an assistant professor of sociology at Johns Hopkins University, said that evictions have serious repercussions for mental health, Sarah Kim of WYPR-FM reports.

MARYLAND PAYS TRIBUTE TO REP. LEWIS: Maryland politicians joined the sorrowful yet triumphant chorus with their own messages Saturday, lauding Rep. John Lewis, stalwart of the Civil Rights Movement and powerful voice in Congress, who died last week at 80, Christine Condon of the Sun reports. 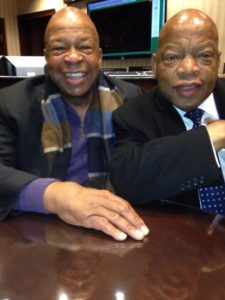 A 2013 photo of the Reps. Elijah Cummings and John Lewis.

THE OTHER JOHN LEWIS: Sen. Marco Rubio tried to pay tribute to the late John Lewis Saturday — by posting a photo of the late Rep. Elijah Cummings of Baltimore. In an embarrassing mix up, Rubio (R-Fla.) posted the photo of himself with Cummings, a Black civil rights leader like Lewis, Dave Goldiner of the New York Daily News reports. Sen. Dan Sullivan (R-Alaska) made the same blunder later Saturday.

REPUBLICAN AGAINST TRUMP: Though James Naylor of Annapolis doesn’t believe his politics have changed, his voting habits are about to. The self-identified “gun-owning Republican” voted for President Donald Trump in the 2016 election, but in November, he plans to cast his vote for Democratic presidential nominee Joe Biden, Olivia Sanchez of the Capital Gazette reports. Naylor, a veteran of the United States Marine Corps, shared his story through the Republican Voters Against Trump campaign. 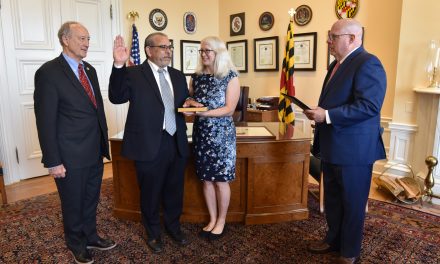 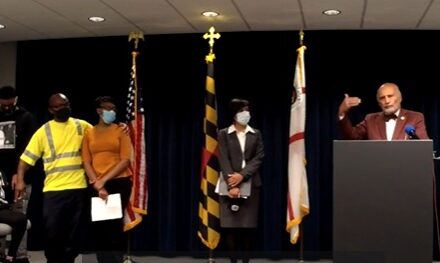