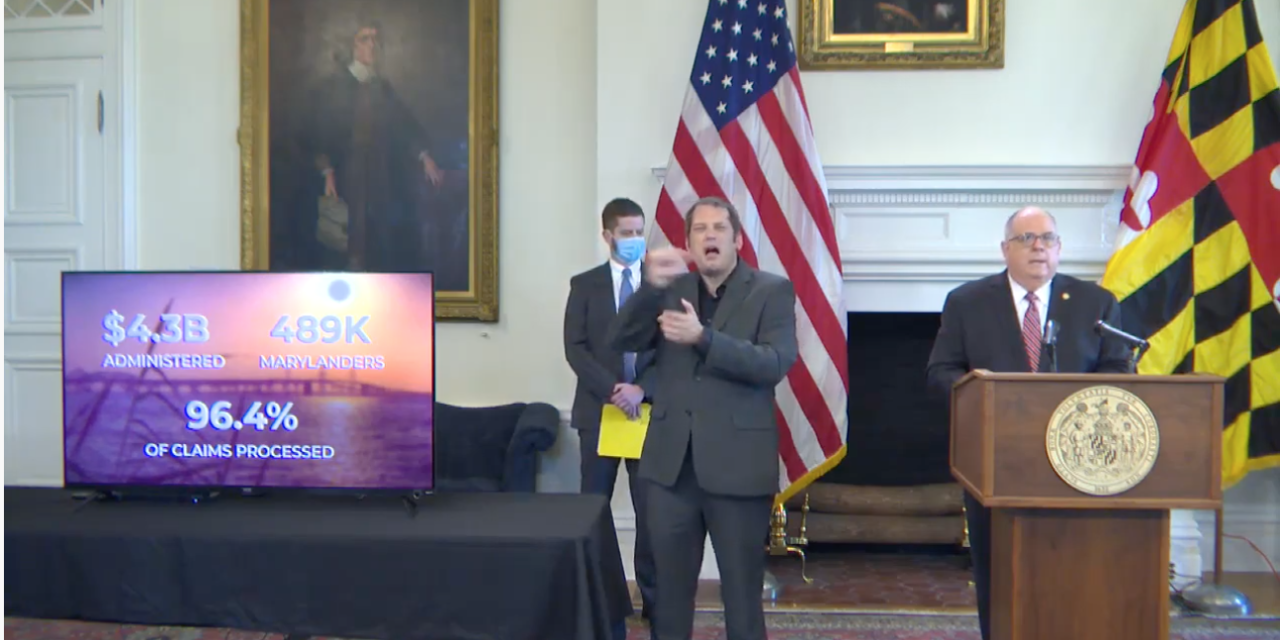 “We’re here to announce that the state of Maryland has uncovered a massive sophisticated criminal enterprise involving widespread identity theft and coordinated fraudulent unemployment insurance claims in Maryland involving more than 47,500 fraudulent claims and totaling over $501 million,” Hogan said at a news conference at the State House in Annapolis.

Hogan said Maryland’s discovery of the scheme and ensuing cooperation with federal authorities in the investigation into the matter has led to the discovery of related schemes in other states.

“The state of Maryland exposing this illegal scheme and notifying the federal authorities has helped shed light on related fraudulent criminal activities in at least a dozen other states.”

“Not only did we identify the fraudulent activity here in Maryland and save the taxpayers a half-billion dollars, but we also helped the federal authorities uncovered related activities in other states across the country. ”

Hogan said despite the incident the personal information of Maryland claimants has not been compromised.

“The state of Maryland’s Department of Labor has not experienced any breach of our unemployment insurance information system and Maryland claimants personal information has not been compromised in any way.”

Labor Secretary Tiffany Robinson said once the department uncovered the scheme the fraudulent accounts were frozen.

“With the secure website and heightened security measures in place, our department quickly detected, reported, and blocked payment to over 47,500 fraudulently filed out-of-state claims. The immediate actions taken saved taxpayers over $501 million.”

Robinson said her department will continue to assist federal authorities in the investigation.

“Our Department will continue to coordinate with the U.S. Attorney’s office and the U.S. Department of Labor’s Office of the Inspector General to investigate and prosecute the criminals taking advantage of the PUA program by filing fraudulent claims using personal stolen identities.”

Robinson said the scheme was uncovered during the July 4th holiday weekend. Hogan said he is not sure who was involved in the scheme but emphasized that it consisted of a coordinated effort. Hogan also said he could not comment on the specifics of an ongoing investigation.

“The OIG will continue to work closely with our law enforcement and state workforce agency partners to aggressively pursue criminals who choose to enrich themselves without regard for taxpayers and individuals who truly need assistance.”

At Wednesday’s news conference, Hogan expressed concern about the rapid increase in the number of COVID infections among Marylanders under age 35. The governor noted that the infection rate among that group is 83 percent higher than that of Marylanders over age 35. The state’s positivity rate is below five percent, which is better than that of the majority of states in the country.

Analysis: Who should pay for Baltimore City’s roads?