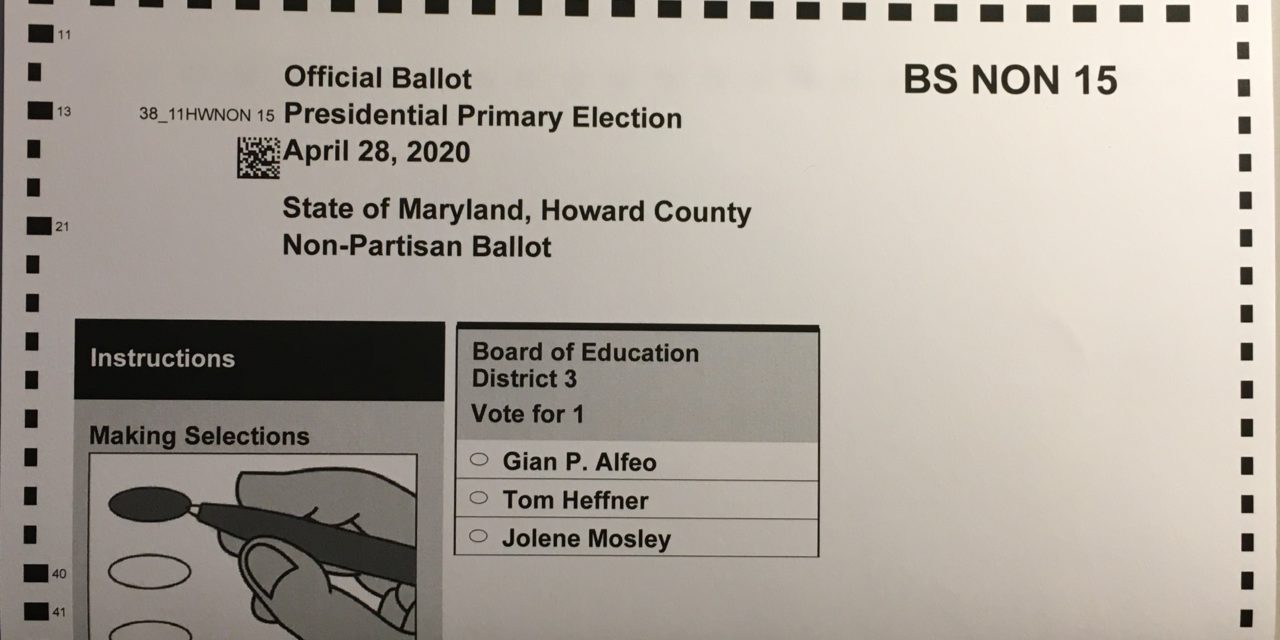 A primary ballot from Howard County. Jolene Mosley was the top voter-getter, but she and Tom Heffner will appear on the November ballot. MarylandReporter.com photo

HOGAN ORDERS RETURN TO IN-PERSON VOTING: Despite concerns from state and local election officials about the practicality and safety of staffing polling places in November, Gov. Larry Hogan on Wednesday ordered them to run a regular, in-person election with every precinct open to its voters on Election Day, Pamela Wood and Emily Opilo of the Sun report.

OPINION: HOGAN IGNORES WHAT’S RIGHT: In an op-ed for Maryland Matters, Sen. Cheryl Kagan says that with Gov. Hogan’s order on the November election, he is “Disregarding advice presented by local and national election experts. Ignoring voting rights advocates. Flouting the recommendations of health care professionals and the Centers for Disease Control. … Placing an unrealistic and unachievable burden on our 24 local boards of elections. Increasing the cost of running one of the most consequential elections of our lifetime. Kowtowing to the White House’s false narrative: unsupported allegations of voter fraud.”

MARYLANDERS URGED TO SIGN UP FOR HEALTH CARE: Members of Maryland’s congressional delegation teamed up with state lawmakers and local officials on Wednesday to urge Marylanders that do not have health insurance to take advantage of the state’s extended open enrollment period which ends on July 15, Bryan Renbaum of Maryland Reporter reports.

COVID HOSPITALIZATIONS DOWN: For the first time since March, Maryland’s count of patients hospitalized because of the novel coronavirus fell below 400, Nathan Ruiz of the Sun reports. At 398, the state’s tally of current hospitalizations Wednesday is at its lowest since there were 308 reported March 31. The next day, that number jumped to 402, reaching a peak of 1,711 by the end of April. Wednesday’s count marks a 77% decline since that peak.

MORE YOUNG ADULTS TEST POSITIVE: Maryland could be entering a phase of resurgence of the novel coronavirus as public health officials express concerns about a growing percentage of young adults testing positive for the disease, Bryan Sears of the Daily Record reports.

SCHOOL SYSTEMS BEGIN ADDRESSING REOPENING: Alison Knezevich of the Sun reports that the Baltimore City school system has proposed relaxing social distancing to as little as 4 feet and requiring face masks for all staff and students when buildings reopen.

OPINION: VIRTUAL CLASSES & FULL TUITION: The University of Maryland, College Park dispatched word this week that perhaps 20% of undergraduate classes will be conducted in person, at least to some degree, this fall. The editorial board for the Sun asks: Why should families have to pay full freight tuition when they are getting a product that is demonstrably less than what they’ve received in the past?

DELEGATE: RACISM IS PUBLIC HEALTH PROBLEM: Annapolis Del. Shaneka Henson wants racism to be recognized as a public health barrier and is pleading with Congress to implement more supports for her constituents and all Black Americans, reports Olivia Sanchez for the Capital Gazette.

B’MORE PROTESTS CONTINUE, PEACEFULLY: The injustices that fueled Baltimore’s unrest five years ago still exist, activists said during recent weeks of demonstrations, as do instances of police brutality and misconduct, Phillip Jackson of the Sun reports. But while much of the nation protested in ways that sometimes ended in violent clashes, Baltimore marchers kept violence and conflict to a minimum while still making sure their message was heard loudly and clearly.

METRO SELLS SPACE FOR SOLAR: Metro has sold 13 football fields’ worth of space at its parking lots and garages in the District and Prince George’s County for a solar power project worth up to $50 million over 25 years, Justin George reports in the Post.

OPINION: COLUMBUS DOESN’T REPRESENT ME: In an op-ed for the Sun, Rosalia Scalia opines that the Christopher Columbus statue on President Street was toppled on July 4th, dragged to the harbor and dumped. Although my father’s name, as a contributor to the cost of the erection of said statue, can be found on its now empty base, I may well be the lone voice in Little Italy who did not take the toppling as a personal affront or as an attack on Italian American contributions to America.

CORRECTION: An item titled “FIRM MAY LOSE CITY CONTRACT OVER BLACK FACE PHOTO” in the July 8 Roundup misidentified who was depicted in black face in a photo that could put a Baltimore City contract with architecture and urban design firm West 8. As the article, by Ian Rounds of Baltimore Brew states, the “The people in blackface were the ex-employee’s children. The use of blackface was said to be a custom at the Rotterdam (the Netherlands) office.”