Szeliga calls for the prosecution of Columbus statue vandals 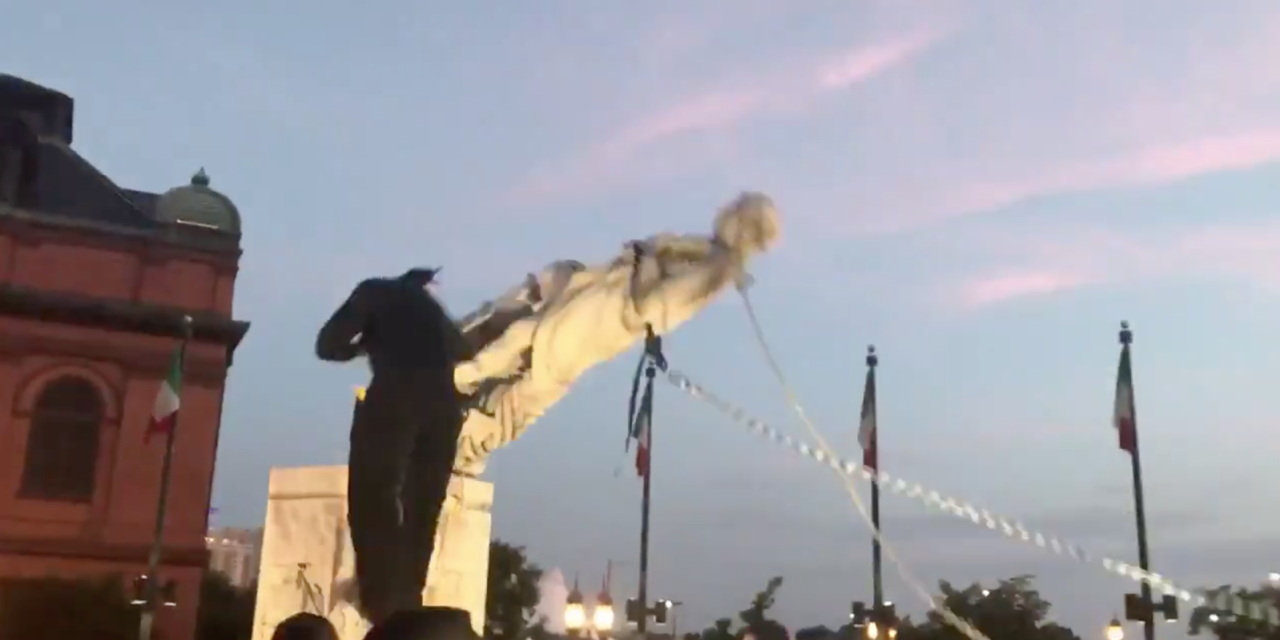 House Minority Whip Kathy Szeliga said those who were involved in the vandalism and toppling of the Christopher Columbus statue that stood near Baltimore’s Little Italy neighborhood should be prosecuted.

Protestors toppled the statue July 4 and subsequently threw it into the Inner Harbor against the backdrop of fireworks. The statue was erected in 1984 during a dedication ceremony with President Ronald Reagan and former Mayor William Donald Schaefer.

The incident was preceded by intense debate over whether it was appropriate for the city to have a monument dedicated to Columbus. The 15th-century Italian explorer who discovered America enslaved and brutalized the indigenous population.

Some said that the statue was a relic of white supremacy. Others disagreed, saying the statue represented an integral part of American history. Protestors had reportedly threatened to topple the statue prior to taking that action.

The Minneapolis police killing of George Floyd in May set off a national debate over whether monuments dedicated to people who were either racist or who held slaves should be replaced.

However, Szeliga, who was at forefront of recent efforts to preserve the statue, said such action is unlikely because she believes Baltimore Mayor Jack Young condones the actions of the protestors.

“They won’t be [prosecuted]. Because the mayor, his comments in the [Baltimore] Sun-were that he approves of it.”

Young’s press secretary, James Bentley, told MarylandReporter.com that the mayor “strongly opposes the destruction or defacement of public property” and that the Baltimore City Police have launched a “full investigation” into the incident.

Bentley said the police “will be examining all available video of the incident” and will take “appropriate actions.”

As of Monday police have made no arrests.

Szeliga said she was told by people who were present during the incident that the police did not intervene to stop the protestors.

Baltimore Police Commissioner Michael Harrison said in a statement to MarylandReporter.com that the department did not have enough officers present at the protest to safely intervene.

“As the Baltimore Police Department was responding to several life and death incidents across the city, a small number of officers were assigned to assist with peaceful protests taking place in the downtown area. As the number of protesters grew, it was tactically unsafe for those few officers to position themselves between the protestors and the Christopher Columbus Statue in attempt to prevent vandalism and destruction. While we strongly oppose the destruction of property in our city, we will continue to mitigate any risk of injury to protestors and our officers. A full investigation of the destruction and vandalism of the statue is underway and we intend to hold those violators accountable.”

Szeliga said she would continue to press the City to institute a “process for public input on all public property – statues, memorials, and artwork.”

Szeliga clarified in an email to MarylandReporter.com that she does not support preserving all monuments.

“I was a supporter of removing the Roger Taney statue from the State House grounds. Clearly, I”m not a preserve all monuments person-but I am against allowing vandals to destroy them without public input.”

Sen. Jill Carter (D-Baltimore City) said she disagrees with Szeliga’s contention that those who tore down the statue should be prosecuted. Carter noted that the city was already making plans to remove the statue when the vandalism occurred and that officials should have acted more quickly.

“I think that the time right now is ripe for these kinds of protests. And that it’s really the responsibility of the city, the state, and the federal government to act more swiftly at removing these monuments to racism and white supremacy.”

Carter said the Columbus statue and other monuments that commemorate those who are considered to have engaged in racist behavior are a source of pain for many Americans.

“These monuments represent a lot of pain for many residents. And, I think, all over this country and this world-people are speaking out and acting out saying that we need to revise the culture of America to be more inclusive.”

Gov. Larry Hogan condemned the destruction of the Columbus statue in a statement on Sunday.

“While we welcome peaceful protests and constructive dialogue on whether and how to put certain monuments in context or move them to museums or storage through a legal process, lawlessness, vandalism, and destruction of public property are completely unacceptable. That is the antithesis of democracy and should be condemned by everyone, regardless of their politics. Baltimore City leaders need to regain control of their own streets and immediately start making them safer.”