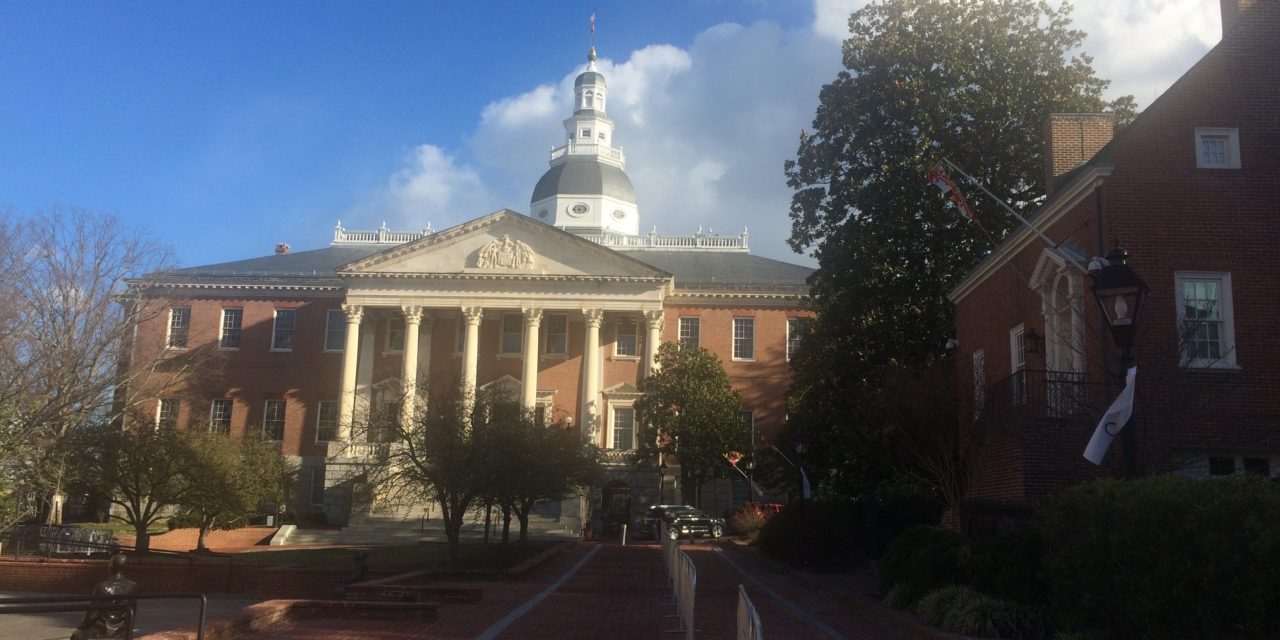 The Maryland State House prior to the construction that has torn up the foreground. MarylandReporter.com photo

TOP LAWMAKERS REACT TO HOGAN BUDGET CUTS: Bruce DePuyt of Maryland Matters reports that the General Assembly’s top fiscal leaders said the first phase of the Hogan administration plan to offset a massive drop in revenues brought on by the COVID-19 pandemic appears to be a thoughtful, if painful, approach to budget-cutting. Lawmakers were responding to the governor’s plan to cut $1.45 billion from the fiscal year 2021 budget.

HOGAN TO RETURN TO BPW AMID BUDGET TALKS: Gov. Larry Hogan will preside over the state Board of Public Works this Wednesday amid intense lobbying against his proposals to cut $672 million from the upcoming state budget because of an economic crisis caused by the coronavirus pandemic, Colin Campbell and Yvonne Wenger of the Sun report.

SCHOOLS TO GET $210M TO BOOST REMOTE LEARNING: Maryland schools will receive $210 million to bolster remote learning programs and improve tutoring and rural broadband access as educators and students deal with the challenges of the coronavirus pandemic, the Hogan administration announced Monday, Ellie Heffernan of the Daily Record reports.

NOTHING SLOWS BALTIMORE HOMICIDES: Jessica Anderson of the Sun reports that not continuing calls by residents to end the violence, not the launch of a police surveillance plane, not even the coronavirus pandemic have slowed Baltimore’s relentless pace of homicides. Approaching the year’s halfway point, more people have been killed in the city than during the same period in 2019, which had the highest homicide rate on record.

MO CO, PG FACE USE-OF-FORCE PROBLEMS: In an analysis for the Post, Robert McCartney writes that in the past three years, the Washington region has had police killings questioned by families and critics in all four of our largest jurisdictions: the District and Fairfax, Montgomery and Prince George’s counties. Officers in our region use force against African Americans and Latinos significantly more often than against whites, according to police data.

WYNN FAVORS CHANGING SCHOOL NAME: Former Maryland Rep. Albert Wynn said he is in favor of changing the name of James Ryder Randall Elementary School in Prince George’s County to something more representative of the local community, reports Bryan Renbaum for MarylandReporter. Randall wrote the poem in 1861 whose lyrics later became the basis for Maryland’s state song – Maryland, My Maryland. The song is considered to be pro-Confederate.

OPINION: STATE SONG MUST GO: In an op-ed for the Sun, high school history teacher Zachary Dziedzic makes an argument for removing the state song, writing that, “We have heroic Marylanders to take pride in from this era, such as Harriet Tubman, Frederick Douglass, and the soldiers — black and white — who fought for the Union. These Marylanders are not celebrated in our state anthem. Instead, we commemorate the perspective of Marylanders who joined the Confederacy.”

UMd BUILDING TO BE NAMED AFTER MIKE MILLER: The University of Maryland announced Monday that its main administration building will be named after alumnus and longtime state Senate President Thomas V. Mike Miller Jr., McKenna Oxenden of the Sun reports.

477 NEW COVID CASES: The state confirmed 477 more cases of the coronavirus Monday and six more related deaths, Lillian Reed of the Sun reports. A total of 67,254 Marylanders have been infected by the virus since it emerged in the state in March and 3,048 have died due to complications from the COVID-19 illness it causes.

JOB SHUFFLE AT ANNAPOLIS LOBBYING FIRM: The Annapolis lobbying firm of Rifkin Weiner Livingston LLC announced Monday that John Reith will assume the new position of chief operating officer effective July 1, Bryan Sears reports in the Daily Record. The firm has also named Camille Fesche and Brad Rifkin as co-chairs of the firm’s government relations division. The changes follow the announcement that Eric Bryant, a longtime partner in the firm, is leaving to become chief of staff to Rep. Kweisi Mfume.

STUDENTS PROTEST JHU POLICE PLAN: A group of about 100 protesters marched Monday across the Johns Hopkins University Homewood campus in North Baltimore to paper the front door and windows of university President Ron Daniels’ house with copies of a faculty petition calling for an end to a stalled plan for a private university police force, Colin Campbell of the Sun reports.

2 MD VA LAWYERS SUSPENDED FOR EMAILS: Two Maryland lawyers who exchanged racist, misogynistic and homophobic emails for about seven years while working at the U.S. Department of Veterans Affairs have been indefinitely suspended from the practice of law by the state’s top court, Steve Lash of the Daily Record reports.

NAACP TO MOVE TO D.C.: The NAACP announced plans Monday to eventually relocate its headquarters from Baltimore to Washington D.C., after moving to a new location in the city a few months ago, McKenna Oxenden of the Sun reports.

JHU OFFICIALLY BUYS NEWSEUM BUILDING: Johns Hopkins University has officially acquired the building that once housed the Newseum, a Washington, D.C., museum focused on journalism and the freedom of the press, Christine Condon of the Sun reports. Hopkins announced in January 2019 that it was purchasing the building, and closed on the property Monday. Hopkins purchased the building for $302 million.

RACIST GRAFFITI IN FREDERICK: Racist graffiti and vandalism discovered over the weekend revealed the work that still has to be done about racial relations in Frederick County, officials said Monday. On Friday and Saturday, people in the city and in parts of the county found graffiti with racial slurs and offensive symbols, as well as stickers with slogans touting white supremacy, Ryan Marshall of the Frederick News Post reports.