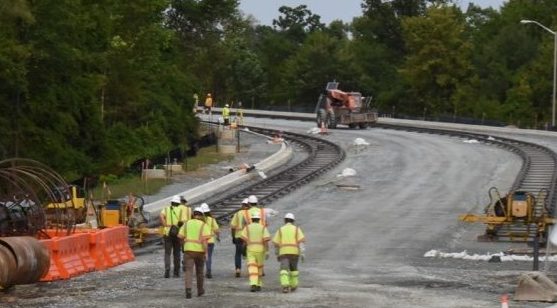 Laying track for the purple line

STATE ON HOOK FOR MILLIONS TO SAVE PURPLE LINE: When the contracting team building the Purple Line announced plans to quit mid-construction this summer, some project watchers viewed it as posturing in a three-year fight with the state of Maryland over hundreds of millions in cost overruns. But, reports Katherine Shaver for the Post, industry analysts say financial pressures faced by the lead construction company underscore the seriousness of the joint venture’s notice that it will walk off the $2 billion light-rail project rather than continue racking up additional costs.

RESTAURANTS READY:  The state’s restaurateurs are ready to hit the ground running, the president and CEO of the Restaurant Association of Maryland tells Bryan Renbaum of Maryland Reporter.

OVERDOSES UP 2.6%: Erin Cox of the Post reports that preliminary data released this week shows that after a year of declines, overdose deaths in Maryland climbed by 2.6% during the first three months of 2020 compared with the same period last year.

DIXON CONCEDES TO SCOTT: Former Mayor Sheila Dixon on Saturday formally conceded the race to reclaim her old seat, offering congratulations to the Democratic nominee for Baltimore mayor, Brandon Scott. Scott, the City Council president, edged out a victory by just over 3,100 votes, Talia Richman of the Sun reports.

OPINION: POLL RESULTS, ELECTION POLES APART: Political pundit Frank DiFillipo writes in Maryland Matters that it’s “a good thing for democracy that Baltimore didn’t just skip the election and go with the recent poll results. “The public opinion surveys, though only a snapshot of a moment, would have saved lots of time, money, error and grief but they were mostly wrong.”

OTHER CANDIDATES AWAIT RESULTS: As they have through much of the rest of the 2020 primary season, Baltimore’s political candidates continued Friday to wait. Emily Opilo of the Sun reports that certification, the finalization of election results scheduled for Friday under the state’s election calendar, was unlikely to be finished by the end of the day, city election Director Armstead Jones announced to his board during an afternoon meeting.

‘DEFUND POLICE’ IN B’MORE: At the end of a long day which began with protesters driving past his house, honking their car horns and playing loud music, Baltimore City Councilman Eric Costello said he supported cutting the Baltimore Police Department’s budget, Ian Round of Baltimore Brew reports.

JHU DELAYS POLICE PLAN FOR TWO YEARS: Maryland Matters is reporting that as communities from coast to coast, including in Maryland, debate the role of police and policing, officials from Johns Hopkins University announced late Friday afternoon that they would pause plans to establish an armed police force on their campuses for at least two years.

RACIAL JUSTICE MARCH IN EDGEWATER DRAWS 100s: Hundreds of people gathered Sunday for a Black Lives Matter march in Edgewater, WMAR-TV is reporting. It was organized by high school students and community leaders. Protesters started at South River High School and marched to the Southern District police station, where they knelt to remember George Floyd and others.

STATE SEES DECREASE IN KEY COVID INDICATORS: Maryland officials reported Sunday that the state has confirmed 396 new cases of the coronavirus and 12 more deaths, a significant decrease in both categories compared with Saturday’s totals. Sunday’s additions bring the state’s total to 61,701 cases of COVID-19, the illness caused by the virus, and 2,811 people who have died due to the disease or complications from it, Phil Davis of the Sun reports.

CHALLENGES FOR DISABLED GRADUATES: Students with multiple disabilities who are graduating from high school during the Covid-19 crisis are facing more challenges with the shutdown of services and programs that would help them during the transition, reports John Lee for WYPR-FM.

FOAM CONTAINER BAN DELAYED: The deadline for Maryland schools and restaurants to stop using polystyrene foam food containers and cups has been extended from July 1 to Oct. 1, the Maryland Department of the Environment decreed in an order last week, reports Elizabeth Shwe of Maryland Matters.

REMOVING CIVIL WAR PLAQUE: For more than 50 years, a plaque in Maryland’s historic State House paid tribute to both Confederate and Union soldiers who fought in the Civil War and “tried to do their duty as they saw it.” Now it could be coming down, reports Pamela Wood for the Sun.

ARUNDEL JUDGES RE-ELECTED: More than a week after Maryland’s first mail-in election ended, the four sitting judges in Anne Arundel County appointed by Gov. Larry Hogan finished at the top of both the Republican and Democratic primaries, reports the Capital Gazette. The victory means there will be no election in November.

NOVEMBER BALLOT SET IN HOWARD: The final results are in from the June 2 primary election in Howard County, and the ballot with 10 Board of Education candidates and two District 5 Circuit Court judge candidates is set for the general election in November, Jacob Calvin Meyer of the Howard County Times reports.

ORIOLES, STADIUM AUTHORITY SEEK NEW LEASE: The Maryland Stadium Authority and the Orioles, in a transition period with their owner in declining health, have agreed to seek a new lease deal that would commit the club to Oriole Park at Camden Yards for years and could open the ballpark to more year-round uses, according to officials from both parties, Jeff Barker of the Sun reports.

REPORTERS FURLOUGHED: Both Pamela Wood of the Sun and Tamela Baker of the Hagerstown Herald-Mail have been furloughed, they announced on Facebook. Their bylines regularly appear here.