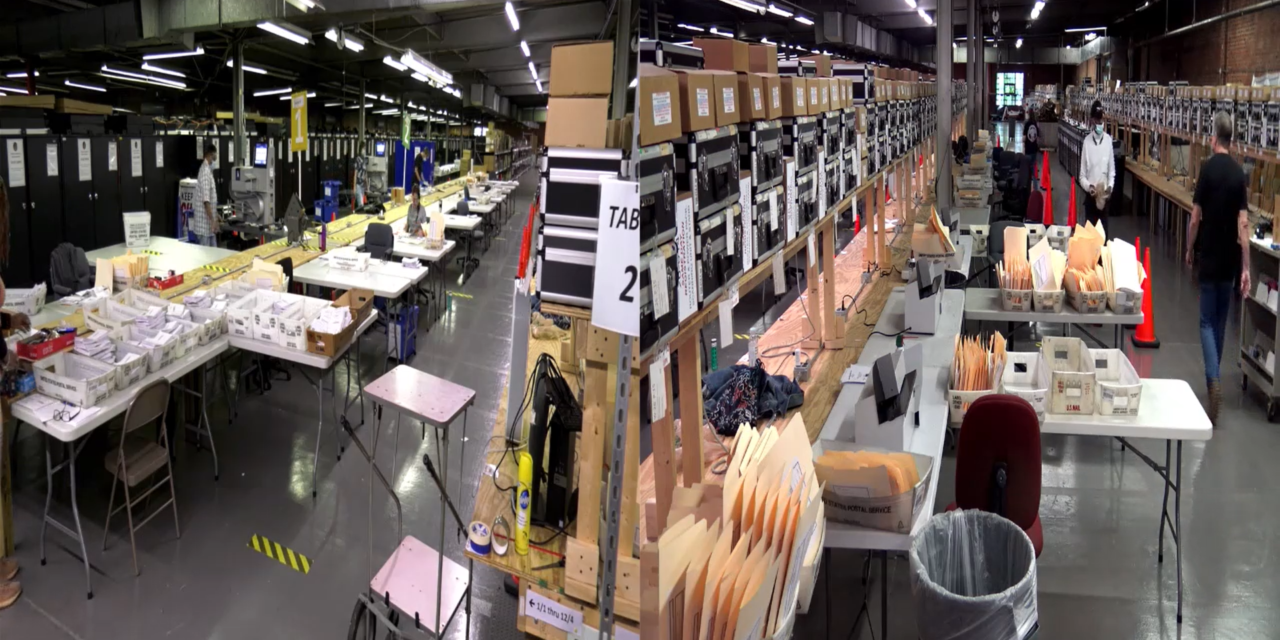 Screen capture of live streaming of ballot counting at Baltimore City Board of Elections Friday. As of Sunday night, 27% of ballots have been received, slightly higher than the statewide average of 23%. Ballots must be postmarked or dropped off by Tuesday night.

STATE WORKGROUP TO ADDRESS POLICE REFORM: In the wake of the killing of George Floyd in custody of Minneapolis police and protests throughout the country, including Maryland, Speaker of the House Adrienne A. Jones (D-Baltimore County) and House Judiciary Chairman Luke H. Clippinger (D-Baltimore City) said Saturday that they were forming the Workgroup to Address Police Reform and Accountability in Maryland, which will begin meeting in the weeks ahead, Josh Kurtz reports for Maryland Matters.

FLOYD DEMONSTRATIONS THROUGHOUT STATE: Hundreds of demonstrators, chanting and holding signs, drove and marched through Baltimore streets from Saturday afternoon into the early hours of Sunday to call attention to the killing of a Minnesota man at the hands of police, as city leaders urged the protesters to remain peaceful while acknowledging their frustration and pain, Jeff Barker, Pamela Wood and Nathan Ruiz report for the Sun.

COVID CONCERN OVER FLOYD PROTESTS: Gov. Larry Hogan, Baltimore officials and public health experts voiced concern Sunday that protests in the city and elsewhere could lead to a surge in new cases of the coronavirus as the state confirmed 763 news cases and 21 more deaths.

HOGAN CONDEMNS TRUMP RHETORIC: Gov. Larry Hogan said Friday that President Donald Trump’s “inflammatory rhetoric” is not helpful toward restoring calm in Minneapolis following rioting after the death of George Floyd at the hands of police, Pamela Wood reports in the Sun.

OPINION: NOTHING WE CAN DO TO REMAIN ALIVE: Former Rep. Donna Edwards writes in a moving column for the Post, “Since my son was in middle school, I have counseled him about how to interact with law enforcement and how to avoid those interactions. I have prayed for him to come home safely as a teen driver, as a college student and now as a young man. Why? Because there seems to be nothing that black sons and daughters can do differently to remain alive.”

OPINION: A SINGLE VOICE OF WISDOM: In a column for the Sun, Dan Rodricks writes that “If Americans are listening for a single voice of wisdom, moral authority and unity at a time of national crisis … they haven’t heard it yet. They certainly did not hear it, much less expect it, from the White House, with a president who makes no pretense to moral leadership.” He then looks toward a calming voice we lost this year, Elijah Cummings.

FLOYD PROTESTS HEAT UP; REOPEN ONES COOL DOWN: As protests against the killing of George Floyd in Minneapolis heat up across the region, demonstrations are cooling down against pandemic shutdown orders that are gradually lifting, reports Len Lazarick for MarylandReporter. In Annapolis Saturday, under a bright, sunny sky, slightly more than a hundred Reopen Maryland protesters gathered on the State House lawn, only about a third of the number that had shown up there at a similar protest two weeks before.

VOTING WITH THEIR FEET: In a column for the Capital, Michael Collins writes that the turnout of regular people on the streets of Annapolis is a more important indicator than any demonstration to Reopen Maryland.

MFUME CALLS FLOYD DEATH ‘MURDER:’ African Americans fear the police in Maryland. Many see parallels to the recent death of Minnesota resident George Floyd and what could happen to them, Glynis Kazanjian reports for Maryland Matters. On the floor of the U.S. House of Representatives Thursday, some 30 miles south of his district, U.S. Rep. Kweisi Mfume (D-Md.) called Floyd’s death “murder.”

763 NEW COVID CASES; 21 MORE DEATHS: Maryland officials on Sunday reported 763 new cases of the coronavirus and 21 more deaths as Baltimore’s mayor and Maryland’s governor voiced concern that protests in the city and elsewhere could lead to a surge in new cases, Phil Davis reports for the Sun.

LAWMAKERS URGE HOGAN TO RELEASE COVID PLAN: While Maryland was due to submit a COVID-19 testing plan to the Centers for Disease Control Saturday, Democratic members of the state’s congressional delegation are urging Gov. Larry. Hogan Jr. (R) to release the plan publicly, Bruce DePuyt of Maryland Matters writes. They also want him to spell out how he intends to direct testing effort to best serve communities of color.

COUNTY HEADS SEEK HOGAN EAR: County leaders are calling on Gov. Larry Hogan to be more inclusive in his decision-making as he eases restrictions put in place to slow the spread of COVID-19 in Maryland, writes Bryan Sears for the Daily Record.

WOMEN SCRAMBLE FOR OBSTETRIC CARE: As Maryland largely remains under a state of emergency due to the COVID-19 pandemic, women are scrambling to access reproductive and obstetric care. And the prominence of the virus in hospitals and other health care facilities is changing the way medical professionals reach their patients, Hannah Gaskill of Maryland Matters writes.

MD SCHOOLS SEEK LAWSUIT PROTECTION: A group of independent Maryland universities, including Johns Hopkins University and Maryland Institute College of Art, are among hundreds of institutions nationwide appealing to Congress for protection against a wave of lawsuits related to the Covid-19 pandemic, writes Morgan Eichensehr for the Baltimore Business Journal.

DIFFICULT HOUSE PRIMARIES: With all eight of the state’s U.S. House members on ballots in Tuesday’s primary, their opponents find themselves as underdogs — not only for the usual reasons, but because the new coronavirus has limited their ability to become better known, Jeff Barker of the Sun reports.

PARROTT TOUTS INDEPENDENT STREAK IN HOUSE RACE: Ahead of the GOP congressional primary, Del. Neil Parrott (R-Washington) said his near decade-long experience in the legislature and his independent streak set him apart from the other Republican candidates in the race for Maryland’s Sixth Congressional District, Bryan Renbaum reports in Maryland Reporter.

BALLOT VENDOR BLAMES STATE: Officials at a vendor that state elections officials blame for a delay in ballots reaching Baltimore voters for Tuesday’s primary say the state was at fault, not them, for the holdup because it delivered the voter information files late that the company needed to address and mail ballots, Emily Opilo of the Sun reports.

POOR PARTY BALLOT RETURNS IN MO CO: Montgomery County’s rate of returning vote-by-mail ballots remains the lowest in the state, reports Adam Pagnucco in his Seventh State blog. The data is also bad when looking at party splits. Montgomery’s return rates among Democrats (10.2%) and Republicans (8.6%) are the worst in the state.

BA CO COUNCIL DEBATES TAX CUT: The Baltimore County Council passed Friday its  budget for the fiscal year that starts July 1,  but not before an acrimonious debate over whether to cut property taxes, John Lee of WYPR-FM reports.