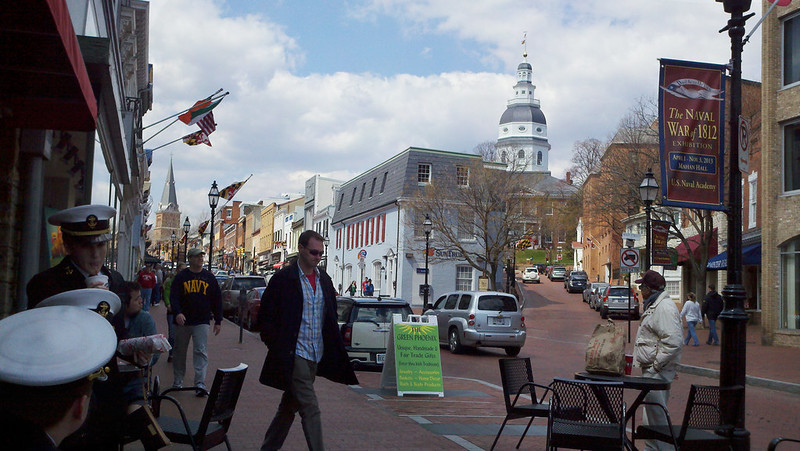 Expect to see more outdoor tables on Main Street in Annapolis and across Maryland as restaurants are allowed to reopen. Photo by ddpool with Flickr Creative Commons License

HELP FOR SMALL BIZ: U.S. Sen. Chris Van Hollen (D-Md.) Thursday touted legislation that would allow small business owners to receive help from the federal government with payroll costs as well as receive a grant to offset other costs in order to survive the COVID-19 pandemic, Bryan Renbaum reports for Maryland Reporter.

MASSIVE DROP FOR STATE REVENUES: Maryland’s nonpartisan chief economist urged state leaders to invest in workforce training, especially for those in the food service business, as he revealed a massive downturn in revenues since COVID-19 hit, reports Bruce DePuyt for Maryland Matters.

BUT STATE MIGHT BE BETTER OFF THAN OTHERS: Unemployment nationally continues to grow but Maryland is doing better than many states, according to personal finance website WalletHub, The Business Monthly reports. Maryland was ranked 45thin growth in unemployment among states.

PERCENT POSITIVE TRENDING DOWNWARD: The average percentage of positive coronavirus tests over the past seven days is down from two weeks ago, when Maryland began the first stage of its recovery plan, Marcus Dieterle reports for Baltimore Fishbowl.

COMMENTARY: MONTGOMERY PROTESTERS WRONG: Protesters to Elrich’s press conference (many of whom did not wear masks) calling the Jewish county executive a Nazi was appalling, writes Ryan Miner for A Miner Detail. “It was shameful. It was embarrassing to Montgomery County,” he wrote about the protests and said Elrich was not responsible for the current pandemic.

COMMENTARY: HOWARD COUNTY ORDER ON CHURCHES HAD MAJOR ISSUES: “Calvin Ball’s anti-religion order was unconstitutional and a gross violation of the Freedom of Religion,” Brian Griffiths blogs on Red Maryland. While it was “heartening” to see the order banning consumption of food and beverage during services withdrawn, it’s “sad that it was merely typical of the modern Democratic agenda,” he continues.

FREDDIE GRAY CASE CITED IN MINNEAPOLIS DEATH: Baltimore City State’s Attorney Marilyn Mosby  responded to comments made by a Minnesota County Attorney about the Freddie Gray case, reports Byrna Zumer for WBFF. In the investigation into the death of George Floyd there, Hennepin County Attorney Mike Freeman cautioned against a rush to charge. Mosby said she didn’t have video footage of Gray’s death. “Mr. Freeman needs to own his decisions and be courageous enough to decide whether or not to prosecute and pursue justice for the murder of George Floyd,” she stated.

SHUTTERED PAPER MILL TARGETED FOR POLLUTION: Attorney General Brian Frosh is bringing a federal lawsuit against a Western Maryland paper mill for its byproducts continuing to pollute the Potomac River a year after it was closed, Jean Marbella reports for the Sun.

METRO SLOW ROLL IN REOPENING: Even as the D.C.-metro region is reopening, the region’s largest public transportation system is not planning to ramp up service for the time being, Justin George reports for the Post. Metro plans to respond if demand increases, but protecting employees remains a top priority for Metro — as of Thursday, 125 employees have tested positive for the coronavirus. More than 70 have recovered and one person remains hospitalized.

REOPENING THE COURTS: As the state’s trial courts move toward opening up more types of trials gradually over the next several months, Court of Appeals Chief Judge Mary Allen Barbera says it won’t be “business as usual,” reports Steve Lash for The Daily Record. The courts must grapple with mandates for speedy trials, rights to confront accusers and access to attorneys despite social distancing requirements.

MOCO NOT VOTING: Montgomery County is dead last in Maryland’s turn out rate of voters returning ballots, writes Adam Pagnucco for Seventh State. Only 6.8% of those who received ballots have returned them as of May 28 in the county, compared to 16.5% statewide.

O’MALLEY WILL BE ON PG RECOVERY TEAM: Former Maryland Gov. Martin J. O’Malley has been selected by Prince George’s County Executive Angela Alsobrooks to serve on the task force “Prince George’s Forward,” and help Prince George’s succeed during, and after, the COVID-19 crisis, Bruce DePuyt reports for Maryland Matters. The two-term governor and former mayor will run the task force’s subcommittee on government operations.

JEALOUS FUND TO BENEFIT WORKING FAMILIES: A coronavirus relief fund created by former NAACP president and Maryland gubernatorial candidate Ben Jealous has raised more than $1 million for working families, and has already distributed $550,000 so far to organizations, Luke Broadwater reports for the Sun.

WALMART TESTING WON’T BE IN FAR WESTERN COUNTIES: None of the new retail sites listed in an announcement by Gov. Larry Hogan are in Garrett or Allegany counties, reports the staff of the Garrett County Republican. The governor announced the opening of test sites for COVID-29 at Walmart stores in Maryland.

MAYOR OF SALISBURY DEPLOYING: The mayor of Salisbury is deploying with the Maryland Army National Guard for about 10 months, reports Kelly Powers for the Salisbury Daily Times. Mayor Jake Day will serve with the Combined Joint Task Force – Horn of Africa and the city administrator will take over his duties as acting mayor.