A PIECEMEAL REOPENING AS DIFFERENT PARTS OF STATE SET THEIR OWN RULES: Baltimore City as well as Prince George’s and Montgomery counties will all extend stay-at-home orders for their residents as Gov. Larry Hogan lifted his statewide order and is relaxing statewide distancing requirements, Talia Richman for the Baltimore Sun reports. See a roundup here. 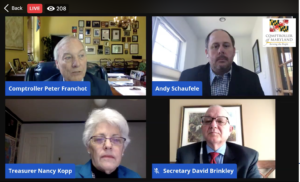 REVENUE LOSS PROJECTIONS UPDATED: Projected revenue loss from the state’s general fund due to the coronavirus pandemic may not be as severe as was previously anticipated, Bryan Renbaum writes for MarylandReporter.com on the virtual hearing testimony from Maryland’s top economist.

AUDIT FOR MISSING DAYCARE PAYMENTS: The Maryland State Department of Education is doing phone audits with each daycare provider to address complaints that some providers haven’t gotten paid by the state for providing daycare to children of essential workers, Erin MacPherson reports for WMAR.

MARYLAND LAWSUIT AGAINST TRUMP REVIVED: “Saying no one is above the law, a bitterly divided federal appeals court Thursday revived Maryland’s claim that President Donald Trump has committed corruption of constitutional consequence in the handling of his property in Washington,” Steve Lash writes for The Daily Record.

COMMENTARY: BRING BACK FIREWORKS: Del. Mike Griffith, a former Marine, is urging Bel Air leaders to reconsider their decision to cancel Independence Day Fireworks and craft a plan to offer them safely, he writes on Dagger News Service. “After surviving the freezing winter at Valley Forge, the many strenuous battles of the Revolution, the economic draining of the colonists to support the Continental Army, and the fear of defeat and accompanying treason charges, our ancestors emerged victorious,” he writes. “So will we.”

COVID-19 FUNDS FOR UNDOCUMENTED IMMIGRANTS CHALLENGED: A nonprofit group has filed a federal lawsuit against Montgomery County seeking to prevent local officials from distributing COVID-19 relief funds to people living in the country illegally, arguing a state law had not authorized undocumented residents to be eligible for the funding, Caitlynn Peetz reports for Bethesda Beat.

AFRO, NAACP DEBATE SPARKS SPIRITED EXCHANGES: The Baltimore Branch of the NAACP and AFRO AMERICAN Newspapers sponsored a mayoral debate on Facebook that took a fractious tone as the six candidates grappled with the city’s troubled past and future framed by COVID-19, Sean Yoes reports for AFRO.

MAYORAL RACE PAC SHUT DOWN: A political action committee that supported Baltimore mayoral candidate Mary Miller is shutting down after a leaked email revealed a strategy to target white voters in a majority-black city, Talia Richman and Luke Broadwater of the Sun report.

HAS COVID HURT DIXON’S CHANCES?: Former Mayor Sheila Dixon’s candidacy now begs a fundamental question, Luke Broadwater writes for the Sun. “Is Dixon a front-runner, as earlier polling suggested? Or has COVID-19 — which turned the race from door-knocking and rallies to video ads — reduced her chances?” 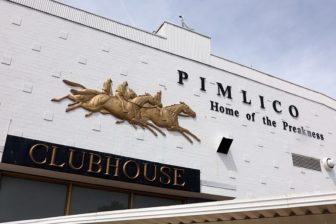 Pimlico Race Course is the home of the Preakness. (Office of the Governor photo)

PREAKNESS TO BE RESCHEDULED: Instead of seeing the Preakness when viewers tune in Saturday, they will hear an announcement of the new date of the race, Marcus Dieterle reports for Baltimore Fishbowl. Gov. Larry Hogan and Belinda Stronach of the Stronach Group, which owns the Maryland Jockey Club, will make the announcement.

CONTESTED JUDICIAL ELECTION IN ANNE ARUNDEL: The candidacy of Wes Adams for Anne Arundel County Circuit Court judge is attracting attention beyond county boundaries, Ryan Miner blogs at A Minor Detail. Adams is running against four judicial candidates appointed by Hogan and a private attorney in the nonpartisan primary.