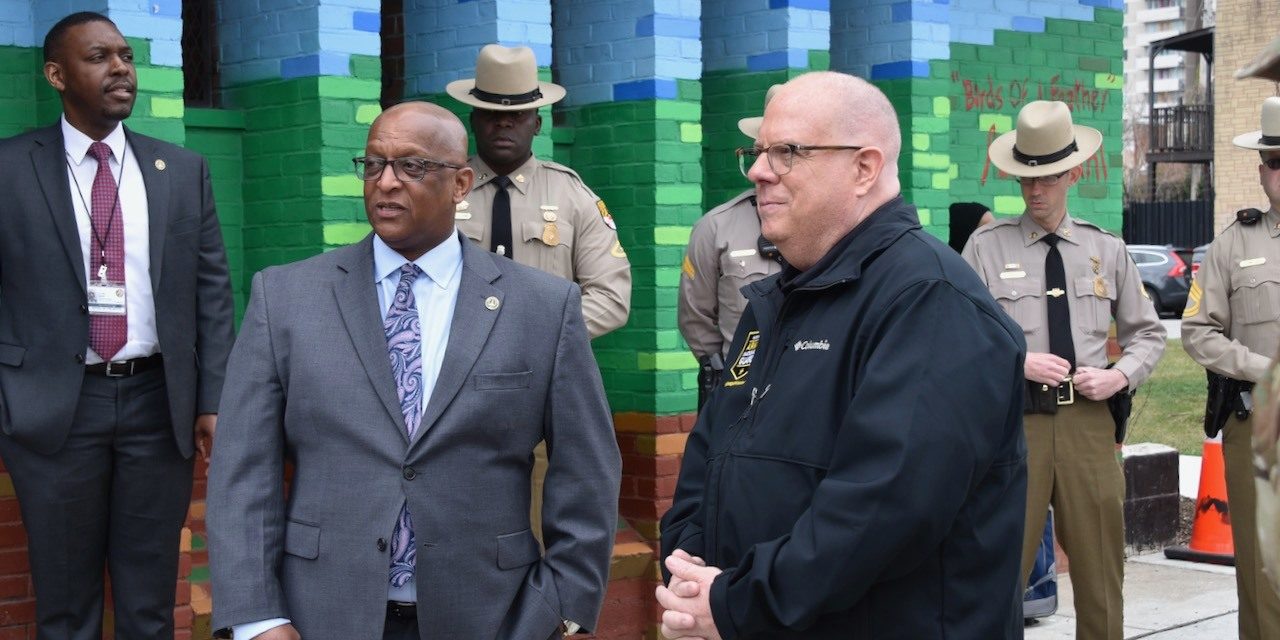 Baltimore Mayor Jack Young and Gov. Larry Hogan were on hand along with Maryland State Police troopers as members of the Maryland National Guard gave away box lunches to city residents at a food distribution site on Greenmount Avenue on March 24. Both politicians, who helped out, have been very visible in their jurisdictions during the pandemic and have been giving news briefings regularly. Young says Hogan has "done a great job" during the crisis. (Mayor Bernard C. Jack Young/Twitter)

“The governor has been working tirelessly with not only the city, but with the counties around the state. And I have got to give him an A-plus on how he has helped all of us throughout the state of Maryland. I think he’s done a great job,” Young told MarylandReporter.com in a phone interview on Wednesday.

Hogan is chair of the National Governors Association. He has received national praise for his handling of the pandemic and the governor has become a frequent presence on morning and primetime television news programs.

On March 30, Hogan issued a stay-at-home order that requires residents to remain in their homes unless they are going out for essential services such as to buy food or groceries, or to receive emergency medical care. The order was preceded by other executive orders that closed bars, gyms, movie theaters, casinos and stadiums, and limited restaurant service to delivery and carry-out. 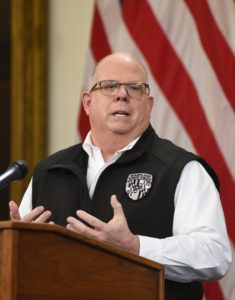 Gov. Larry Hogan said Wednesday that state restrictions on outdoor recreation were easing as of Thursday morning.              (Executive Office of the Governor)

At a news conference on Wednesday, Hogan said that as of Thursday at 7 a.m. EDT, the stay-at-home order would be amended to allow certain outdoor activities such as golfing and recreational boating, camping, hunting, fishing, tennis and horseback riding as well as the resumption of elective medical procedures. Hogan said the stay-at-home order could be rescinded as early as next week if the number of COVID-19 hospitalizations and ICU stays continues to drop.

State Schools Superintendent Karen Salmon joined Hogan at Wednesday’s news conference. She said that the state’s public schools will remain closed for the rest of the 2019-2020 school year, and that distance and online learning will continue until schools reopen. Salmon had twice postponed the return date for the current school year.

Hogan’s three-phase plan for reopening the state, which he presented on April 24, is contingent on making progress in four areas. It does not factor in when students will return to school.

Like Young, Del. Stephanie Smith (D-Baltimore City), who chairs the city’s delegation to the Maryland General Assembly, also gave Hogan high marks for his performance during the crisis.

“I think he has done most of what is necessary to incorporate the guidance of science…Hopkins, University of Maryland System — he’s using our brain trust. But I think he’s advising people to take the precautions necessary to stay safe at home.”

However, Smith said she hopes Hogan does not yield to political pressure to open up the state before it is prudent to do so. 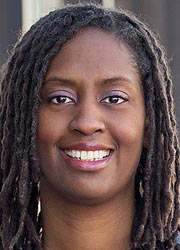 “I need to encourage him to hold the line on the pressures to open up Maryland because in this threat we do not know enough from a scientific perspective to make that next step. Especially because we haven’t seen sustained reductions in confirmed cases and we’re not seeing necessarily a sustained reduction of 14 days of people accessing our beds. So, to me, I think he’s been doing better than our president. But that’s such a low bar. And I think he needs some more support from our federal government to actually deliver on what’s needed right now.”

Smith said the ultimate test of Hogan’s leadership will be determined by the quality of education students receive while they are unable to be in the classroom. Many are doing online lessons but a lack of computers or the internet has been an issue for some underprivileged pupils.

“If we turn our backs on creating an innovative and supportive school system… at a time where kids are not learning and they do not have access to a computer or the internet — today will be a reckoning for his true response to the coronavirus because it goes well beyond telling people to stay at home.”

Young presented the Baltimore City Public Schools CEO Sonja Brookins Santelises with a $3 million check on Wednesday after the City Council approved the funds to help provide laptops and internet access to students in need. 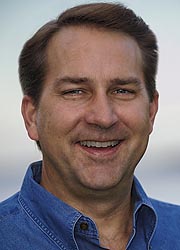 “He was quick to act. He was ahead of the curve.”

Mautz represents Talbot, Caroline, Dorchester and Wicomico counties. He said that in his district the general consensus is that the COVID-19 curve has been flattened.

MarylandReporter.com asked Mautz if that means he believes that businesses in his district should be allowed to reopen early.

“As far as the reopening efforts I think we’re a little bit behind the eight ball — in particular for the small and independent businesses, which are the backbone of the Eastern Shore. Businesses need some indication and some guidance for when they can open and how they can open. I know hard dates are difficult but the sooner that there’s some guidance, the quicker they are going to be able to reorganize and begin their recovery.”

Mautz said many of the essential businesses given permission to remain open during the pandemic pose a greater risk of transmission of the virus because they generally see more foot traffic than would the smaller businesses that were forced to close. Mautz said social distancing measures that are used at bigger stores to protect customers from the virus could be just as effective at smaller stores.

“So, why then should a small retailer, who can operate probably in a safer manner, be required to close their store just because they’re not a grocery or a hardware store?”

Mautz cautioned against keeping businesses closed for too long.

“Some would like to keep everything closed until the unemployment benefits run out. But if that happens, when those benefits run out, there’s gonna be no jobs to go back to.” 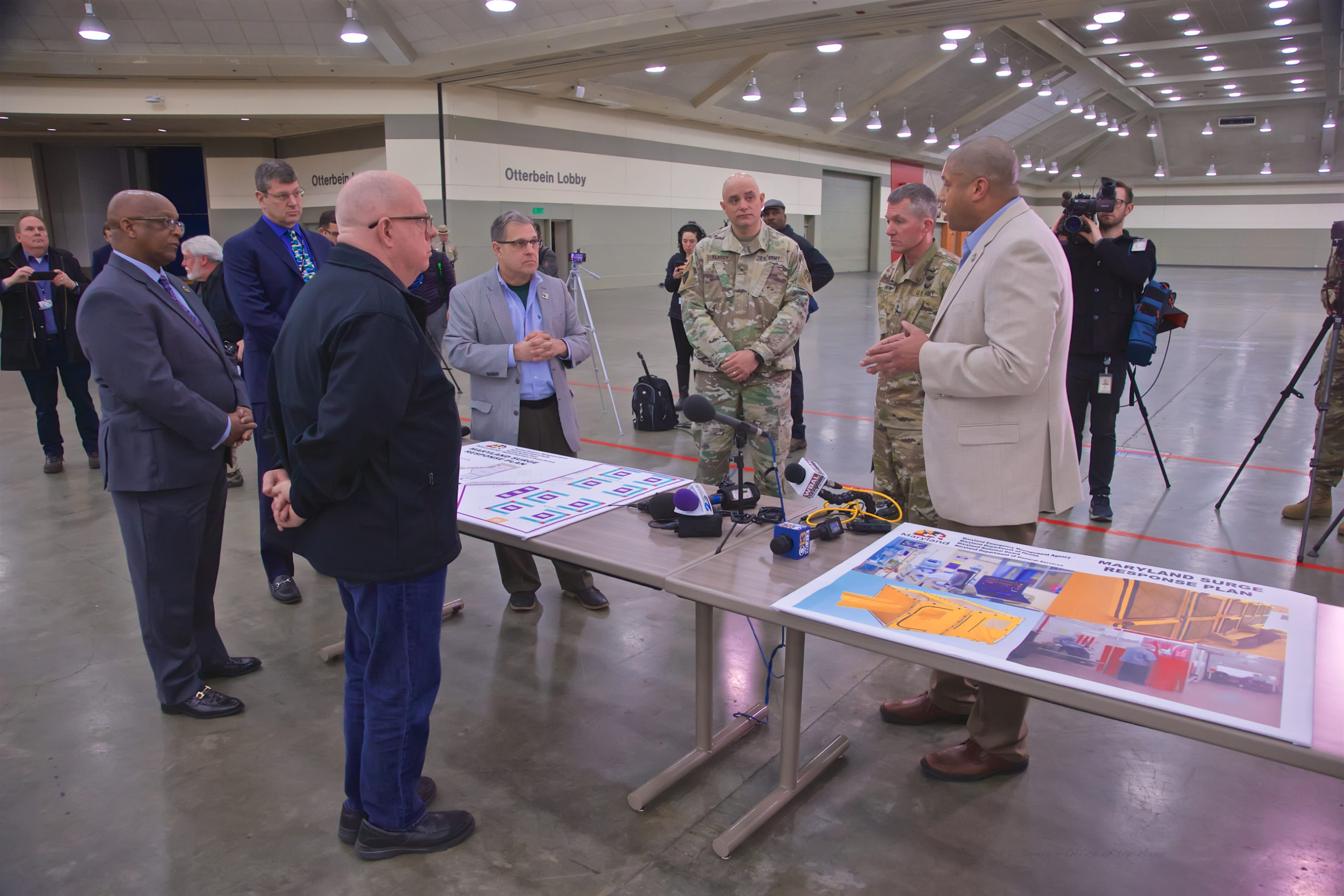 Mayor Jack Young and Gov. Larry Hogan visited the Baltimore Convention Center on March 24 and were briefed on how part of the facility was being converted into a state field hospital. (Mayor Bernard C. Jack Young/Twitter) 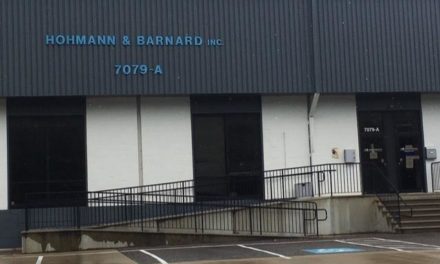