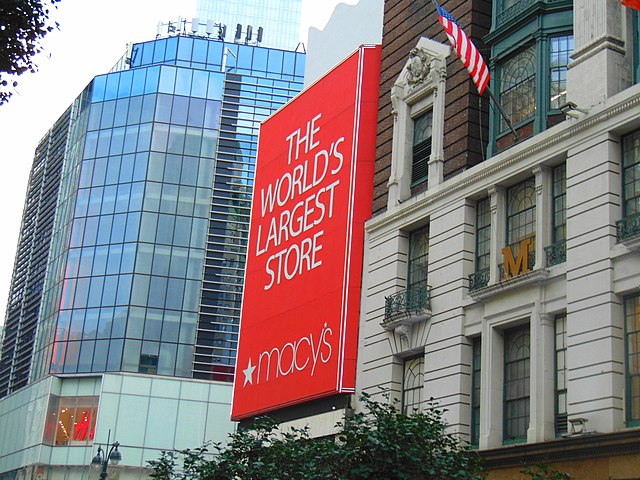 Macy's — the nation's largest retailer — is furloughing at least 125,000 employees because sales have plummeted since the chain closed its stores on March 18 due to the COVID-19 pandemic, the company said last week. The company had already announced on Feb. 5 that it was closing 125 stores due to slow sales. Pictured here is the flagship store at Herald Square in Manhattan. Several other retail chains have furloughed workers since the coronavirus pandemic began, including JCPenney, Gap and Kohls. (JJBers/Creative Commons)

As the coronavirus ravages Maryland businesses almost twice as many as of the state’s residents filed for unemployment last week than during the previous week and the state director of the National Federation of Independent Business said he is not surprised by what has been reported as a record number of claims. There are 2,331 confirmed cases of the coronavirus in Maryland as of Thursday morning, according to the state’s Department of Health. Thirty-six Marylanders have died from the virus.

“They’re not surprising given the times that we find ourselves in,” Mike O’Halloran, told MarylandReporter.com in a phone interview on Thursday.

“Whether employers have been forced to close because they are regarded as non-essential or even those businesses that were allowed to remain open — just not being able to make the math work —unfortunately, it’s not very surprising. But it’s devastating news regardless.”

NFIB has represented small and independent business owners in all 50 state capitals and Washington, D.C. since 1943. O’Halloran was asked what NFIB members are telling him.

“What I’m hearing from members is despair, fear, heartache. And it’s not just for themselves, it’s more often than not for their employees. For the ones that are still trying to stay open —  they’re telling me: ‘Mike, I don’t know how I’m going to be able to keep anybody employed.'”

O’Halloran elaborated on that point.

“Name a heartbreaking scenario and I guarantee you I’ve heard it from members over the past couple of weeks. And when we talk about some of the financial resources that are available to them — whether it’s at the state or federal level…unfortunately the reality is for so many of our small businesses it’s going to be a day late and a dollar short.”

O’Halloran said businesses are having trouble planning due to ever-changing restrictions.

“The only way they can thrive is on being able to plan. Money going in. Money coming out. And right now they just can’t do that.”

The Maryland Department of Labor estimates that 84,230 claims were filed for the week that ended on March 28, compared with 42,334 claims that were filed for the week that ended on March 21, according to data released Thursday morning. Montgomery, Anne Arundel and Baltimore counties saw the largest number of claims filed. An estimated 5,942 claims were filed in Maryland during the first two weeks of March. Maryland’s unemployment rate is projected at 3.3%, according to the latest data provided by the U.S. Department of Labor’s Bureau of Labor Statistics, which was released on March 27. Maryland’s unemployment rate was the same  3.3% during the month of February, according to the Bureau.

The high volume of claims filed in Maryland closely mirrors that of many other states across the nation. Maryland ranks 28th among states in the number of claims filed last week, according to data released by the U.S. Department of Labor on Thursday. During that period an estimated 6.6 million Americans filed for unemployment, according to the department.

Former Maryland Rep. Albert Wynn, a Democrat, who served in Congress from 1993-2008, said that although the state’s economy is suffering the situation could be worse.

In response to a WalletHub study that ranked Maryland No. 20 in terms of state economies most exposed to the virus, he said: “In this environment, it’s hard to call that a positive but it’s obvious that the situation could be much worse.”

“My general reaction is that Maryland has a diverse economy, so its strengths somewhat balance its weaknesses from the standpoint that we’re not totally tourist-dependent. But we do have a significant tourist-entertainment component from the standpoint of our beaches. At the same time, we have a significantly high federal employment workforce which counterbalances that because a significant number of our people are not necessarily dependent upon the business community for their economic survival.”

Wynn elaborated on that point.

“I think there is a counterbalancing effect, which to me explains why we’re at 20…not totally exposed from a business standpoint, but yet obviously we’ve got some concerns because we do have a significant number of small businesses.”

The study was featured in an article that was published Tuesday on the website. Maryland’s neighbors Washington, D.C, and Virginia respectively ranked 16th and 31st in economic exposure to the virus. Louisiana ranked first in economic exposure to the virus. Georgia ranked last. The study based its findings on two criteria: “High Impact Industries & Workforce” and “Resources for Businesses To Cope Better with the Crisis.” The two criteria are evaluated across 10 metrics. Each metric is weighted on a scale of 0-100. WalletHub used data from U.S. government agencies such as the Census Bureau, Department of Labor, the Small Business Administration and the Bureau of Economic Analysis.

“Amalgamating limited categories to infer “State Economies Most Exposed to Coronavirus” is immediately out of date and invalid without consideration of current spending policies and an assessment of responsibility of state legislative leadership.”

Vatz elaborated on that point.

“Anyone who thinks the bill, whose thoughtless and short-sighted assumption that precipitous raising of pay of teachers and just throwing money at problematic schools will address the major causes of poor learning, must forget their own experiences in school wherein family instability trumps all other causes of teaching and learning difficulties.”

“The cost of the largely unfunded bill, leading to $4 billion a year by 2030, will destroy Maryland’s solvency and is revelatory of the utter irresponsibility of Maryland’s lawmakers,” Vatz added.

Gov. Larry Hogan has issued a series of executive orders aimed at limiting the spread of the virus in Maryland. The latest order, a stay-at-home directive he announced Monday that went into effect that night, prohibits residents from leaving their homes unless they are going out for essential services such as picking up groceries or medicine. That executive order was preceded by others that closed all non-essential businesses, limited events to no more than 10 people, restricted restaurant service to delivery and carryout, and postpones the state’s primary elections from April 28 to June 2. State School Superintendent Karen Salmon announced last week that the state’s public schools will remain closed until April 25 at the earliest. On March 12 Salmon had announced a two-week closure.

Human Resources Dept. spent money it didn’t have and paid bills without verifying they were due

QUARANTINED in the Year of the Rat: How a New Year’s trip to China turned into nightmare for Md. family