MORE THAN 80% OF MARYLANDERS AGREE WITH HOGAN ACTIONS: More than eight out of 10 Marylanders agree with the actions Gov. Larry Hogan has taken to help prevent the spread of the coronavirus in the state, according to a MarylandReporter.com poll reported on by Bryan Renbaum.

DEM HEADS PUSH FOR IN-PERSON VOTING: The president of the Maryland Senate and the speaker of the state House called Tuesday on Gov. Larry Hogan to explore offering in-person voting as an option during the June primary, in spite of the coronavirus outbreak, Emily Opilio and Pamela Wood of the Sun report. 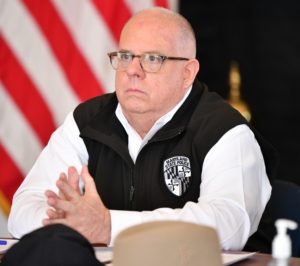 CORRECTIONS ASSIGNMENT ATTEMPTS TO TRACE COVID-19: Local corrections officers who recently worked overtime shifts at Jessup Correctional Institution will be temporarily reassigned to that prison in order to trace their exposure to an inmate who allegedly tested positive for COVID-19, AFSCME tells Glynis Kazanjian of Maryland Matters in an email.

CENSUS, FUNDING THREATENED: The COVID-19 pandemic threatens to make the Census count even more difficult than usual, which could exacerbate the inequitable distribution of resources in Maryland and other states, Alison Stevens reports in Maryland Matters.

TRACING COVID-19 AT CARROLL NURSING HOME: The coronavirus that tore through a Carroll County nursing home is believed to have been carried into the facility by a health-care worker who was infected but not displaying symptoms, Gov. Larry Hogan (R) said Tuesday, Laura Meckler and Dana Hedgpeth report for the Post.

DEATHS FROM COVID-19: Seven more Marylanders have died from the new coronavirus, officials said Tuesday, bringing the total number of deaths in the state to at least 22, Colin Campbell of the Sun reports. The total number of confirmed COVID-19 cases in Maryland has risen to at least 1,660 as of Tuesday,

VIRUS PUTS STRAIN ON CARROLL HEALTH SYSTEM: The first signs of the coronavirus’ strain on the health care system in Carroll County appeared Tuesday morning, with the critical care unit at Carroll Hospital reaching its capacity with patients, Jon Kelvey of the Carroll County Times reports.

WA CO FACES ‘CRITICAL POINT:’ Washington County is nearing a “critical point” in its fight against the new coronavirus, Earl Stoner, health officer with the Washington County Health Department, said Tuesday afternoon. He and others stressed the importance of following Gov. Larry Hogan’s stay-at-home order to limit contact to help stem the spread of the virus, Mike Lewis reports for the Hagerstown Herald-Mail. 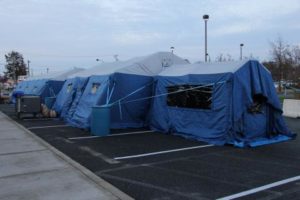 Peninsula Regional Medical Center in Salisbury has erected this 20-bed inflatable portable hospital on its grounds. The self-contained unit is equipped with heat and air conditioning, (Courtesy: PRMC)

SALISBURY HOSPITAL PREPS FOR COVID-19: Things are changing rapidly at Peninsula Regional Medical Center in Salisbury as it prepares to care for COVID-19 patients, writes Rose Velazquez for the Salisbury Daily Times. A large, white triage tent has been erected at the walk-in entrance of the emergency department. A 20-bed inflatable hospital sits steps away — armed for the possibility of a surge.

TEST KIT SHORTAGE IN MO CO: Montgomery County health officials and local hospitals have been preparing for a potential coronavirus surge for weeks as the number of confirmed cases grows during the pandemic. But testing availability is still lacking and the county doesn’t know when it will receive any test kits from the state, Briana Adhikusuma reports for Bethesda Beat.

FIRST COVID-19 CASE IN DORCHESTER: After Dorchester County announced its first COVID-19 case Tuesday morning, Allegany County remained the last of the state’s jurisdictions without a confirmed test result for the deadly disease. But that doesn’t mean the virus isn’t already spreading throughout the local community, Teresa McMinn of the Cumberland Times-News reports.

UNDER ARMOUR RETOOLS TO MAKE MASKS: Under Armour said Tuesday that it is manufacturing face masks, shields and specialized fanny packs to help protect health care workers at the University of Maryland Medical System responding to the COVID-19 pandemic, Adam Bednar of the Daily Record reports.