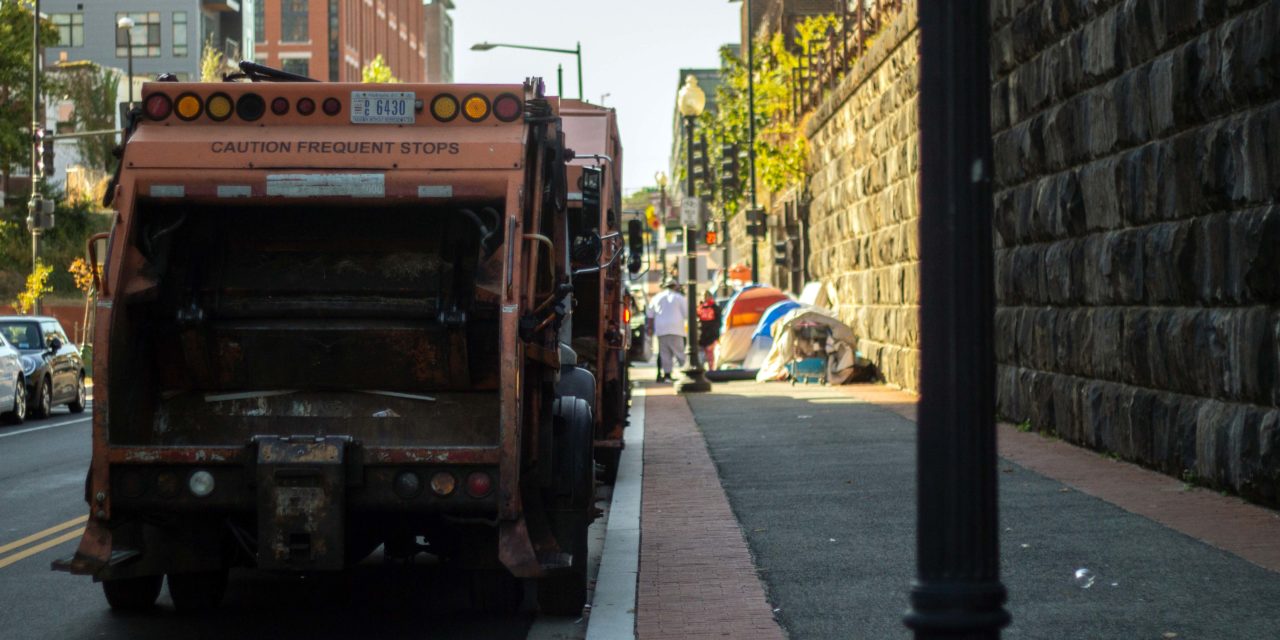 Tents line the sidewalk on 2nd Street Northeast in Washington, D.C., on October 15, 2019, as city workers prepare to clean the adjacent tunnels where the tents are normally erected. The District of Columbia frequently clears encampments temporarily so streets can be cleaned. Workers typically throw away anything left behind. (Photo by Julia Lerner/Howard Center for Investigative Journalism)

SILVER SPRING, Md. — People living in outdoor homeless encampments should not be evicted during the outbreak of the novel coronavirus unless they can be moved to individual housing units, the Centers for Disease Control and Prevention recommended late Sunday.

Living outside for prolonged periods of time has long been associated with greater health risks. But the recommendations posted on the CDC’s website said the short-term impact of clearing the tents and temporary structures would likely increase the risk of spreading the virus because people would scatter to other parts of the community.

The CDC also recommended that people living in encampments set up at least 12 feet away from each other and that governments make sure that stocked restrooms with running water that allow people to wash their hands with soap are always available nearby. 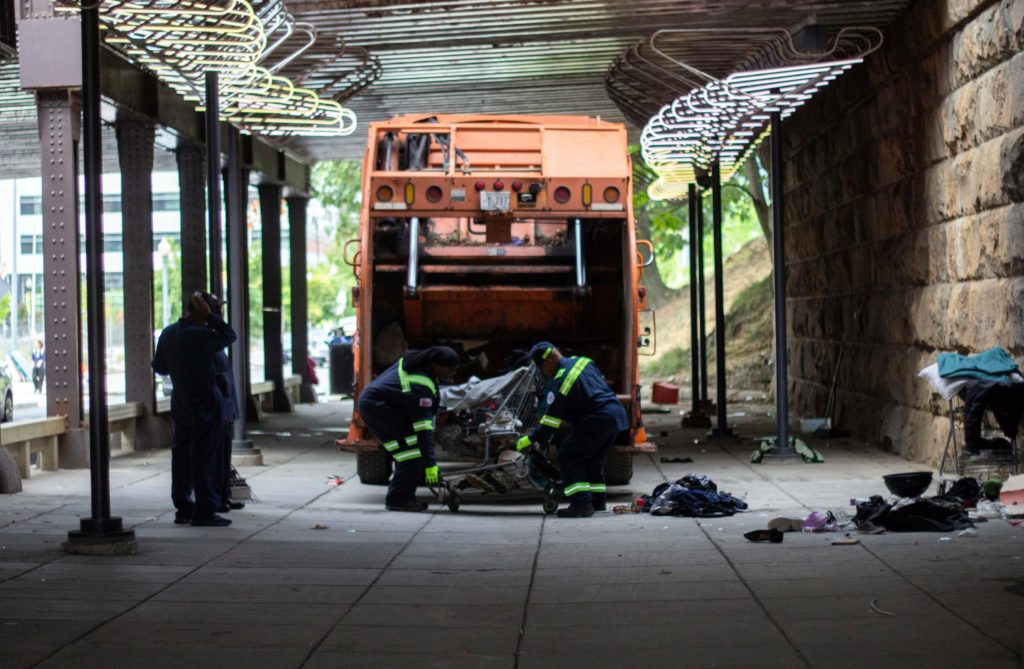 City workers throw away items left behind by homeless people during a temporary encampment clearing on L Street Northeast in Washington, D.C., on Sept. 5, 2019. The District of Columbia frequently clears encampments temporarily so streets can be cleaned. Workers typically throw away anything left behind. (Photo by Julia Lerner/Howard Center for Investigative Journalism)

Tars also is calling on Congress to incorporate emergency housing into the coronavirus relief bill being debated in the Senate. He said federal dollars to help hotels, motels and cruise companies hurt by the pandemic should be tied to requirements that those companies provide housing to people who have nowhere else to go.

“If our public dollars are going to help their companies, then they need to be using those dollars to benefit the public and not just their own bottom lines,” Tars said.

The definition of encampments can differ by city, but they generally are a cluster of tents or other temporary structures where homeless people live outside. The makeshift homes are often found on sidewalks, vacant land or in underpasses. They can be home to as few as three but sometimes more than 100 homeless people.

Cities often clear these encampments for public health and safety reasons. An ongoing federal study looking at Chicago, San Jose, Calif.. and two other cities has found those municipalities have used encampment clearings to try to convince often-reluctant residents to move to a shelter or find permanent housing. The principal investigator thinks the approach is effective but said the CDC recommendations are “perfectly sensible.”

Khadduri said Chicago has typically cleared three or four large encampments every year, but expects that city and others to put their clearing plans on hold during the outbreak.

In Maryland, the Department of Housing and Community Development has taken the lead on addressing homelessness. The department is trying to work with local organizations to get hotel and motel rooms for homeless people who need to isolate or quarantine themselves, said Sara Luell, its spokeswoman.

The department also has lifted restrictions on how state dollars can be used so that more can be diverted to paying for those hotel and motel stays.

It’s unclear how the District of Columbia, which has one of the largest populations of unsheltered homeless people in the country, will adjust to the new recommendations. Multiple requests for comment from city officials were not answered Monday.

A website that lists upcoming encampment cleanings in the city still listed four planned for Tuesday and another planned for Thursday.

The D.C. government often temporarily clears encampments so they can be cleaned. The process usually involves homeless people moving their things away for an hour or two as city workers throw away anything left behind and sometimes power wash sidewalks.

Almost 570,000 people sleep on the streets or in emergency shelters on a given night in theUnited States. An estimated 1.6 million Americans experience at least one night of homelessness each year.

Tars said the National Law Center on Homelessness & Poverty had been concerned that governments might use quarantine orders as an excuse to round up people who live in encampments. But keeping them out of large shelters is the best option.

“Would you, at this moment, want to be put into [a] shelter with hundreds of other people, with all using common facilities, breathing the same air?” Tars asked. “No, you wouldn’t. Why would we expect any homeless person to want that?”