HOGAN POSTPONES APRIL PRIMARIES: Gov. Larry Hogan announced on Tuesday that he has ordered that Maryland’s primary elections — which were scheduled for the end of next month — to be postponed to early June due to the global outbreak of the coronavirus COVID-19, Bryan Renbaum writes for MarylandReporter.

$2.4B KIRWAN PLAN GETS FINAL OK: Maryland lawmakers gave final approval Tuesday night to a sweeping education reform bill designed to restore the state’s public schools to among the best in the nation, Pamela Wood and Luke Broadwater report in the Sun. The bill took on new urgency once lawmakers agreed to end their session Wednesday — more than two weeks early — due to the growing coronavirus outbreak. 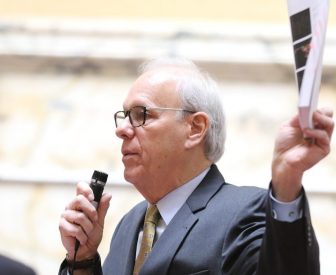 Sen. Paul Pinsky (D-Prince George’s), chair of the Senate Education Committee, holds up the Kirwan Commission report during floor discussion of the bill in the Senate last April.  Pinsky was also a member of the commission. (Glynis Kazanjian/MarylandReporter.com).

SEN. PINSKY’S WIFE DIES: Sen. Paul Pinsky (D-Prince George’s) — who had shepherded through the Kirwan legislation — “stood to speak after the vote, his voice filled with sorrow.” Pinsky told his colleagues he had to rush home to be with his wife,  Joan Rothgeb, who was in the “very late stages” of a battle with cancer. Senate President Bill Ferguson announced that Rothgeb died at 4:30 a.m. Tuesday, Luke Broadwater of the Sun reports.

HOUSE PASSES $47.9B BUDGET: The Maryland House of Delegates approved a $47.9 billion budget plan on Tuesday, after a series of extraordinary steps to speed the budget approval process as the state battles the spread of the COVID-19 virus, Danielle Gaines of Maryland Matters reports.

SCRAMBLE TOWARD EARLY FINISH: With just hours left in the 2020 legislative session, lawmakers are dashing madly to put final touches on legislation they have long labored over. And lobbyists and advocates, banned from the State House because of the novel coronavirus, are scrambling remotely, hoping to push their priority legislation over the finish line and to the governor’s desk, writes Hannah Gaskill for Maryland Matters.

LIMITED PROGRESS IN COVID-19 TESTING: Maryland continues to have to triage who gets to be tested for COVID-19 while it asks the federal government pointed questions about the ability and capacity to test for the disease caused by the coronavirus, Tim Curtis and Bryan Sears report in the Daily Record.

2nd COVID-19 CASE IN CARROLL: A family member of the first man found with the coronavirus in Carroll County has contracted the disease, according to the county health department, Mary Grace Keller of the Carroll County Times reports.

STRIPPED-DOWN SPORTS BETTING: A stripped-down version of a bill to let voters decide on legalizing sports betting is moving through the General Assembly in the final hours of the legislature’s abbreviated session, Pamela Wood of the Sun reports.

KWEISI MFUME PROFILE: KK Ottesen of the Washington Post profiles Kweisi Mfume, 71, who won the Democratic primary in a Maryland special election to serve out the congressional term of the late Elijah Cummings. Mfume previously held the seat for five terms. The election will be held by mail-in ballot.

CARROLL COMMISH SLAMS DELEGATE: A bill that would have affected Carroll County government’s purchasing limits will likely be put on hold for a year, and one commissioner is pointing the finger at Del. Warren Miller for “meddling” in county affairs, Mary Grace Keller of the Carroll County Times reports.