700 PACK OFFSHORE WIND HEARING: Residents of Ocean City, the Eastern Shore and Delaware packed an exhibit hall at the Ocean City convention center to make known their opinions on offshore wind. Matthew Prensky of the Salisbury Daily Times reports that the hours-long discussion at times strayed from the public hearing’s stated intention. At least 700 people came to the hearing, and 14 pages were filled with names of those registered to speak, according to the Maryland Public Service Commission.

BILL WOULD EXPAND TOLL VETO JURISDICTIONS: A growing group of Maryland lawmakers is rallying behind a measure that would effectively give local government leaders veto power over state-backed toll road projects, writes Bruce DePuyt for Maryland Matters. Currently, the state must obtain the approval of a majority of impacted counties before building a toll road, bridge or tunnel in the nine counties that comprise the Eastern Shore — Caroline, Cecil, Dorchester, Kent, Queen Anne’s, Somerset, Talbot, Wicomico and Worcester. Senate Bill 229 and House Bill 292 would expand that power to all 23 counties and Baltimore City.

GIVING JURISDICTIONS DOMINANCE IN LAWS: A yet-to-be-introduced bill would secure that counties have no “implied preemption,” giving them assumed dominance in the law-making process for their jurisdictions unless explicitly specified in state legislation, Hannah Gaskill of Maryland Matters reports.

HOGAN GREENHOUSE GAS PLAN CALLED ‘TRULY VAGUE’: A draft plan from Gov. Larry Hogan’s administration to cut Maryland greenhouse gas emissions by 40% by 2030 is “truly vague,” a leading state senator said Thursday about the administration’s assertions that the plan was on track to meeting its goal, Brian Witte of the AP is reporting.

MORE STRICT GUN CONTROL REGS EXPECTED: As a contentious gun rights rally takes place in Richmond this week, Virginia’s neighbor to the north is debating whether to further tighten gun laws that are already some of the strictest in the nation, reports Erin Cox for the Post. The measures proposed in Virginia — including background checks on most purchases and a one-gun-per-month limit — have been on the books in Maryland for years, in some cases for a generation. But with new leadership in Annapolis reflecting the legislature’s leftward shift, Maryland’s gun-control activists and some Democratic lawmakers see an era of even stricter regulation ahead.

FILLING ASSEMBLY VACANCIES: Talia Richman of the Sun writes that when former Baltimore Del. Cheryl Glenn abruptly resigned from the General Assembly, it opened up a coveted House of Delegates seat in Maryland’s 45th District. Thirteen people applied to fill the spot. But they didn’t have to convince voters they were right for the job. Instead, a seven-member Democratic central committee voted on who they would send to Annapolis. Committee chair Chanel Branch was among the candidates. And with the other committee members split between candidates, Branch cast the vote that won her the nomination. Her recent nomination is reviving a debate about the way General Assembly vacancies are filled, and whether the process does enough to consider voters’ voices.

OPINION: LEGISLATIVE PAY RAISES WON’T STOP GREED: Greed could kill Maryland’s citizen legislature, opines Maryland Matters’ Frank DeFilippo. The low grumbles you hear in the background are the voices of legislators who believe that pay raises will deter or convert those among them with larceny in their hearts and bribery on their minds.

MARYLAND JAILS HIGH NUMBER OF YOUNG BLACK MEN: Hannah Gaskill of Maryland Matters reports that Maryland has the highest incarceration rate in the nation of black men ages 18 to 24, according to a November report issued by the Justice Policy Institute. The second-highest incarceration rate for young black men is in Mississippi. “No disrespect to Mississippi,” said Senate Judicial Proceedings Committee chairman William C. Smith Jr. (D-Montgomery), “but this should be something that raises everyone’s eyebrows throughout the entire General Assembly, and especially in this committee.”

$372.9M RACETRACK PLAN: A Maryland bill forming the structure for a $372.9 million plan to keep the Preakness Stakes in Baltimore and transform Laurel Park into a year-round horse racing facility is on pace to drop in a matter of weeks. Some key lawmakers, however, are still working out how to ensure a revamped Pimlico Race Course, and roughly 50 acres of private development surrounding the track benefits residents, Adam Bednar of the Daily Record reports.

LIMITING BILL FILING: In an effort to reduce late-night committee sessions and late-session bill scrambles, new leaders in the Maryland Senate will spend the summer studying ways to curtail the chamber’s workload, including a proposal that would limit the number of bills senators can introduce, Danielle Gaines of Maryland Matters reports. The proposed rule change from Republican Sen. Michael Hough of Frederick would have limited lawmakers to filing 20 bills per session in the future.

OPINION: FOCUS ON THE BAY: Alison Prost of the Chesapeake Bay Foundation opines in a column for the Sun that the foundation “is urging Maryland lawmakers to remain committed to improving the state’s environment as they begin the 2020 General Assembly session focused on education. The state’s environment is facing unprecedented outside pressure. The Trump administration has already reduced vehicle exhaust standards, made it more difficult to protect communities from climate change and is working to scale back pollution protections for some seasonal waterways and wetlands.”

OPINION: LUEDTKE’s COLLEGE GAMBIT: In an opinion piece in Red Maryland, Brian Griffiths opines that Maryland’s House Majority Leader and former troll blogger Eric Luedtke has come up with another idea that should have been dropped before it ever saw the light of day. Luedtke believes that more should be done to facilitate voter registration among college students on college campuses, and wants taxpayers to pay for it.

OPINION: GIVE COMMUNITY COLLEGES THEIR DUE: The editorial board for the Sun opines that community colleges are often called the workhorses of higher education … they help make up for high schools’ shortcomings and for shifting needs of employers, offering remedial, technical and mid-career training classes that are vital for student success and for the state’s continued prosperity. … Yet … the same governor who likes to boast about record levels of education funding during his time in office has chosen to slash community college funding — and not just for the coming fiscal year.

FREDERICK PUBLIC SAFETY CENTER SLATED FOR GROWTH: Steve Bohnel of the Frederick News Post reports that Frederick County’s public safety training facility could be getting some much-needed extra space. Gov. Larry Hogan (R) introduced his operating and capital budgets last week, and in the latter, included $1.5 million for expansions and renovations at the center. County Executive Jan Gardner (D) said it’s good news for the county. She met with the Frederick County delegation recently and requested $1.73 million for those improvements.

422,000 REGISTERED TO VOTE IN FEB. 4 SPECIAL PRIMARY: More than 422,000 voters are registered for a Feb. 4 special primary for the late U.S. Rep. Elijah Cummings’ longtime seat, according to new figures that reflect the dominance of Baltimore Democrats in the district, writes Jeff Barker in the Sun. The 7th Congressional District — which includes portions of the city of Baltimore and the counties of Baltimore and Howard — is one of the state’s most Democratic congressional districts.

CUMMINGS COURTHOUSE: The city of Baltimore will formally name a courthouse after the late U.S. Rep. Elijah Cummings in the first half of 2020. Democratic Mayor Jack Young unveiled renderings Friday of bronze plaques that will be affixed to the exterior of Courthouse East of the Baltimore Circuit Court, the AP is reporting. One includes an image and biography of the congressman, and the other reads “Elijah E. Cummings Courthouse.”

B’MORE CITY COUNCIL PRESIDENT RACE: The three leading candidates for Baltimore City Council president each have amassed more than $50,000 in campaign funds ahead of the first competitive race for the position in nearly a decade, Emily Opilo of the Sun reports.

NO CYCLIST TUNNEL IN MO CO BUDGET: Montgomery County Executive Marc Elrich (D) has included no money in his capital budget proposal for the county’s long-promised plan to build a tunnel to carry cyclists and runners on the Capital Crescent Trail beneath busy Wisconsin Avenue in downtown Bethesda, Katherine Shaver reports for the Post.

ALLEGANY BOARD DEFENDS WIND PROJECT STANCE: Jake Shade, president of the Allegany County Board of Commissioners, defended the board’s support Thursday for the placement of 17 wind turbines on Dan’s Mountain, Greg Larry of the Cumberland Times News reports. “As a fiduciary of Allegany County government, I believe that it would be detrimental and a disservice for Allegany County to simply pass on this project and the important revenues associated with it,” said Shade.

CIVIL RIGHTS LAWYER VS AMTRAK: Sherrilyn Ifill was returning to Baltimore from New York on Amtrak train 80 Friday, as she does at the end of many working weeks, when she says a junior conductor approached and asked her to give up her seat. “To say that the internationally known civil rights attorney, scholar and activist bristled would be an understatement,” Jonathan Pitts of the Sun writes 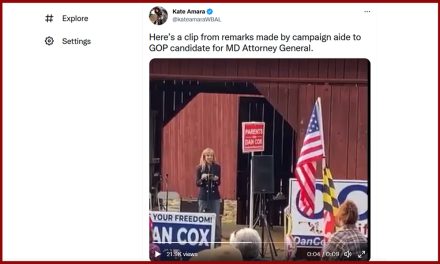