TAX DEAL, SCHOOL VIOLENCE: Negotiators reached a deal late Tuesday to alleviate by $100 million an expected $500 million state income hike tax for Maryland residents next year. The agreement in principle between top negotiators in the House of Delegates and the Maryland Senate requires final approval by committees today, but includes 10 different tax cuts and credits designed to dampen the impact of rising state tax bills, report Erin Cox and Michael Dresser in the Sun.

HATE CRIME LAW: The Maryland House of Delegates passed laws Tuesday that modify the state’s hate crime law to include groups of people and require more wide-ranging data collection and sharing for an annual report on overdoses, Chase Cook reports in the Annapolis Capital. Senate Bill 528 was passed unanimously by the House Tuesday and already received a unanimous vote in the Senate.

INTERNET PRIVACY: Maryland may soon join other states that are putting consumer protections in place to allow residents to determine which personal data Internet service providers may use, while ensuring they’re treated equally regardless of how they use the Internet, Glynis Kazajian reports in MarylandReporter.

PRIOR BAD ACTS: After many failed attempts over more than a decade, legislation allowing prior sexual predatory behavior to be used in criminal prosecutions of alleged sex offenders is set to be enacted by the legislature this week, Glynis Kazanjian of MarylandReporter writes.

MARRIAGE AGE: Both chambers of the Maryland General Assembly have passed legislation eliminating exceptions to state law allowing 15-year-olds to marry, but differences over whether the new minimum age should be 16 or 17 mean the cross-filed bills are likely headed for a conference committee, writes Heather Cobun for the Daily Record. The proposed bills eliminated all exceptions to Maryland’s minimum marriage age of 18 but were both amended in committee.

RX POT LAW MODIFICATIONS: As the General Assembly races through its final week in session, lawmakers are pushing to find common ground on a bill that would raise the number of medical marijuana growers and processors in the state. The measure died on the floor of the chambers at midnight during the 2017 legislative session, Danielle Gaines writes for the Frederick News Post.

POT DECRIMINALIZATION: Sen. Bobby Zirkin on Tuesday defended his call for decriminalizing the possession of less than an ounce of marijuana as a way to conserve police resources, Steve Lash reports in the Daily Record. But law enforcement was having no part of that argument during a House Judiciary Committee hearing on Zirkin’s Senate-passed legislation.

ADDRESSING CITY CRIME: Caryn York of the Job Opportunities Task Force answers an op-ed written by Gov. Larry Hogan and published in the Sun. In an opinion piece for MarylandReporter, she writes, “To quote the governor, the issues of violence in Baltimore, and across the State, ‘did not happen overnight…and cannot be fixed overnight…a targeted approach is needed.’ …I wholeheartedly agree with the governor on this point, and this point only.” She says the bill was rushed, and contains mandatory minimums that will again lead to mass incarceration, contradicting last year’s Justice Reinvestment Act which both she and the governor supported.

FROSH JOINS CENSUS LAWSUIT: Attorney General Brian E. Frosh joined 17 of his counterparts across the country Tuesday in suing the Trump administration over a proposal to add a citizenship question to the 2020 Census, which critics say would drive down immigrant participation and lead to an undercount of states’ populations, Jean Marbella of the Sun writes.

HUNTING IN THE PINK: Anna Muckerman of Maryland Matters writes that thanks to the work of two novice hunters, Maryland hunters may soon be allowed to wear bright pink safety gear. Before taking a hunter safety class in October 2016, sisters Paige and Brooke Simonsen, from Easton, stocked up on pink hunting clothes. Then, they found out that Maryland law did not allow hunters to wear any color besides blaze orange. “Our instructor mentioned that other states have pink and we only have orange, and we wanted to change that so we went to Sen. (Addie) Eckardt,” Paige, 12, said. 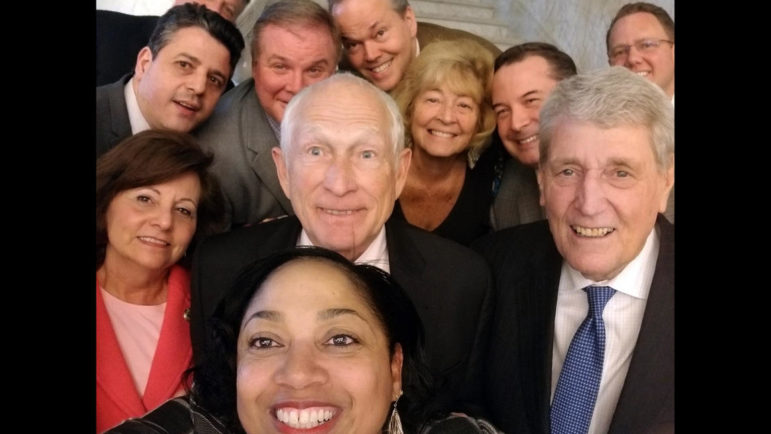 HOGAN’s BUY LOCAL COOKOUT: Gov. Larry Hogan has invited chefs using Maryland ingredients to submit original recipes for the 2018 Buy Local Cookout, writes Michel Elben for the Carroll County Times. The annual event will be held July 19 at the Government House in Annapolis. “Maryland is home to a diverse, vibrant agriculture and seafood industry that provides us with a wide variety of fresh, nutritious options,” said Hogan in a statement.

CANDIDATE WON’T ADVERTISE ON SINCLAIR: The national controversy embroiling Sinclair Broadcast Group seeped into the Maryland race for governor Tuesday as a Democratic candidate suggested politicians boycott the company’s four stations broadcasting in the state, Erin Cox of the Sun reports that Democrat Krish Vignarajah on Tuesday vowed to not air any political ads on stations owned by Hunt Valley-based Sinclair until the television giant stops requiring anchors to recite statements admonishing other news organizations for sharing fake news.

O’MALLEY’s REDISTRICTING: If the Supreme Court uses a Maryland redistricting case to revolutionize the way congressional districts are drawn after the 2020 Census, the name Martin O’Malley will be emblazoned in the nation’s history books, writes Barry Rascovar in his Political Maryland blog.

MALL MINORITY OWNERS SUE: A group of minority owners of a former North Bethesda mall eyed for Amazon.com’s second headquarters is claiming in a lawsuit that the majority owners, including developer and Washington Nationals owner Theodore Lerner, are trying to force them out in advance of a potential Amazon deal, Jennifer Barrios of the Post is reporting.