Medical marijuana brought more than $10 million in tax revenue to Md. in FY 2019

Medical marijuana produced more than $10 million in tax revenue for Maryland in FY 2019 – exceeding the amount of money the industry brought to state coffers during the previous two fiscal years combined, according to data provided by the Maryland Medical Cannabis Commission.

Maryland has an estimated 87 licensed cannabis shops, according to a spreadsheet provided by the commission. The majority are located in major population centers such as Baltimore City, Baltimore County, Howard County and Montgomery County.

The majority of prescriptions were written for chronic pain, severe pain, PTSD, severe or persistent muscle spasms and severe nausea.

Mitch Trellis, managing partner of Remedy, a medical marijuana dispensary in Columbia, said the hurdles to opening a cannabis shop in Maryland “are many and numerous.” 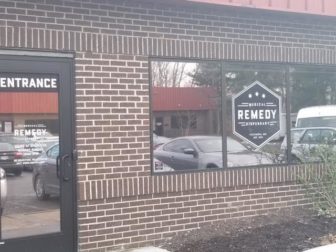 Remedy, a medical marijuana dispensary, is located in a nondescript strip mall in Columbia. The shop opened in 2017. (MarylandReporter.com photo)

Trellis said he began a working group in April 2014 but was not able to open his shop until the end of 2017. He said the application process alone took about 18 months.

“It took us close to four years to basically get to open.”

But Trellis said the wait was worth it.

“We’re the Number 1 store in the state by both sales and by patients served.”

Trellis said he has 32 employees and serves more than 2,000 customers per week. However, he admits that the cannabis industry in Maryland is tough.

“It is the most competitive state in America. There are more stores per square mile than anywhere else in America.”

Banking is a major hurdle for cannabis shop owners. Marijuana is illegal under federal law and banks are national and sometimes even multi-national entities. Because of this, most banks are not willing to accept deposits from cannabis shops because the federal government could revoke their FDIC (Federal Deposit Insurance Corporation) charter. If a bank’s charter is revoked, its deposits would no longer be federally insured.

Severn Bank in Annapolis is one of the few banks in Maryland that accepts deposits from cannabis shops. Trellis said Remedy deposits its money there.

“They’ve been very forward and very innovative in their processes and in their programs, and they’ve done a great job,” he explained.

Shin said the number of medical marijuana users in the state increased 20% from 2018 to 2019. He explained what that means for the industry.

“National conglomerates are trying to consolidate licenses making larger brands, so smaller operators have to work smart since there are enough sales to survive in the growth market. Sustaining sales and growing the medical consumer base will be key for dispensaries. Sales and distribution for processors and growers.”

But like Trellis, Shin said the hurdles are many.

“The typical hurdles of high capital requirements and operating costs while managing sales and margins will always be constant. You need financial discipline, a strong management team, and foresight to keep contingency funds for regulation changes that are bound to come.”

Shin said lack of diversity among cannabis shop owners is a problem in Maryland.

“In the first round, only one license was awarded to an African American-owned group and the commission has gone through leadership changes. Minorities including women need better representation as the state program evolves which will evolve.”

Fifteen states have decriminalized marijuana use. In 2014, Maryland followed that path by passing a law that makes possession of 10 grams or less punishable by a fine and a mandatory drug education program.

Concrete action on legalization is not expected during this legislative session. However, two bills have been filed related to cannabis. The House bill would prohibit medical marijuana users from being denied the right to purchase, own, possess or a carry a firearm. The Senate bill would allow an income tax subtraction modification for the expenses medical cannabis growers incur.

Maryland’s medical marijuana program was established by the assembly in 2012. However, the program did not become operational until December 2017.

William Tilburg, executive director of the Maryland Medical Cannibis Commission, did not respond to a request by MarylandReporter.com for comment by the deadline for this story, nor did a spokesperson for Comptroller Peter Franchot.