Sen. Guy Guzzone is the new chairman of the Senate Budget and Tax Committee. MarylandReporter.com by Glynis Kazanjian with Creative Commons License.

The following column appears in the January issue of the Business Monthly serving Howard and Anne Arundel counties.

All kinds of wild numbers are floating around about the cost of school reforms recommended by the Kirwan Commission on education and how to pay for them.

The new chairman of the Senate Budget and Taxation Committee, Howard County’s Guy Guzzone, sees a way forward by phasing in the recommendations without tax hikes – at least for the moment. [The legislature presiding officers told The Washington Post’s Erin Cox that no hikes were planned in the state income, sales or property tax.]

“If you’re going to spend all this money, you want to see results,” Guzzone said in an interview [in December]. “What I believe by now at this point is that we have the resources right now to get this going. We have the resources to see improvements along the way.”

“And we’re going to keep checking. And every time we check and realize that we’re succeeding and we’re reaching the next level of success, we can say, OK, let’s figure out how to fund that next level. I think that’s the right way to think about it.”

“Instead of driving [all the recommendations] out, let’s make sure that we’re getting the results first before we start saying we’re going to raise this revenue or do this tax change or whatever.”

“We want our kids to have the very best. But we need to make sure that the money is being spent in an efficient way. And there’s nothing wrong with that. It’s perfectly reasonable.”

“I think we realize that the money and the policy go together. We’re going to talk through it. I can’t say exactly what it’s going to look like at this point, but I think reasonable people would say, let’s be efficient. If you’re efficient, you end up getting more for your money.”

“I don’t want to be misleading to you in saying that. That doesn’t mean we aren’t thinking about having to eventually come up with that money somehow.”

Guzzone was talking Dec. 9 in his Annapolis office, as his outer office was being filled with packing boxes for the move upstairs to chair the committee. There had been speculation for more than a year that Guzzone was a leading candidate to become Senate president if Mike Miller, ailing with cancer, gave up the gavel after 33 years.

That didn’t pan out in the internal contest for the backing of the Senate’s 32 Democrats. So Guzzone switched his support to Baltimore’s Bill Ferguson, one of the Senate’s youngest members, half Miller’s age and more progressive. As his prize, Guzzone was named chair of one of State House’s most powerful committees, combining the power to both spend and tax.

Guzzone was already a budget subcommittee chair, and he had been quietly searching for the extra funding legislators knew would be required to implement Kirwan’s ambitious plans.

Some of the likely new revenue sources that don’t involve general tax increases for already heavily taxed Marylanders are likely off the table for this session – sports betting and full legalization of recreational marijuana. Even those sources are hardly enough to fully fund a major revamping of the teaching profession as envisioned by Kirwan. Initial funding for prekindergarten for four-year-olds and extra resources for schools with high concentrations of poverty are already in the works.

While Republican Gov. Larry Hogan supports these last two measures, he has been highly critical of the overall price tag for the other commission recommendations. He says they would require $33 billion in tax hikes.

Asked about the governor’s objections, Guzzone takes a long pause.

“It seems to me that as long as I can help keep moving the ball forward, as long as legislators keep moving the ball forward and stay focused on great outcomes,” that’s the best way to operate. “And the key in my mind is not getting wrapped up in a lot of politics. It’s just stay focused on the policy and the kids and the outcomes. If we do that, you know, good policy has always been good politics at the end of the day.

“So let’s just stick with the policy. I don’t want to get into the matches back and forth. I think there’s the opportunity to come up with good solutions.”

Earlier in the year, Ferguson, a member of the Kirwan Commission, had lashed out at Hogan when he called their recommendations “half-baked.” But since he’s become the Senate president nominee – he doesn’t actually get elected till Jan. 8 – he’s been more conciliatory when Hogan shows a willingness to discuss education. 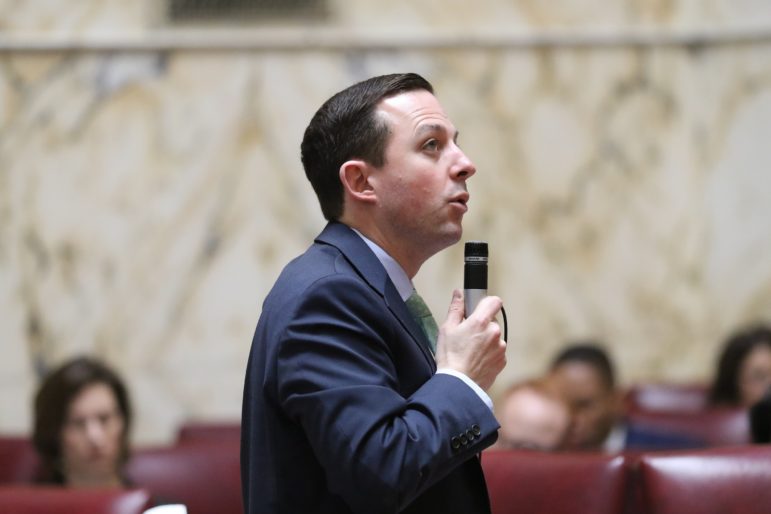 “You’ve probably heard the term that we have all been saying – evolution, not revolution,” Guzzone said. “This year in particular is about stability.”

“It’s about showing that this new president and this new speaker [Adrienne Jones] and their teams can govern. That they can be thoughtful and get things done.”

“The thing I love about Bill is that he really at his very core believes in the team concept and he really has been reaching out to all the members as individuals and small groups. People get their true sense of what’s good, bad, indifferent and how can we come together to.”

Ferguson has been visiting senators in their home districts, including Republicans.

“I think that a lot of members saw how well he composes himself and composes what he was doing on the floor and in a committee and how thoughtful he was, how open he was to other people’s opinions.”

Ferguson was nominated unanimously by his 31 Democratic colleagues, but he has no delusions about the difficult task ahead. Speaking at a fundraiser for Democratic Sen. Clarence Lam in Columbia last month where he was introduced by Guzzone, Ferguson said.

“There’s no question that the next session will be a challenging session.”