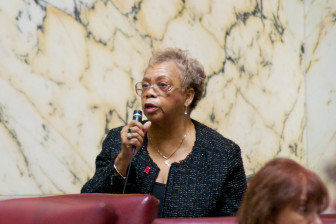 SEN. NATHAN-PULLIAM TO RETIRE: Sen. Shirley Nathan-Pulliam, a long-serving state lawmaker from Baltimore County, announced Sunday she is retiring, citing health issues. “I do this with a heavy heart,” Nathan-Pulliam, 80, a Democrat, wrote in a letter to incoming Senate President Bill Ferguson, Luke Broadwater of the Sun reports.

TOLL LANE PROMISES COULD BE REVERSED: The Board of Public Works could go back on toll lane promises made to appease Montgomery and Prince George’s counties earlier this year, WTOP-AM is reporting. The changes would accelerate construction of toll lanes around part of the Capital Beltway; allow for some land to be purchased for the widening before final environmental approvals; alter promises about how a share of toll revenue would support transit options; and extend plans for Beltway toll lanes in Prince George’s County all the way to the Woodrow Wilson Bridge.

ROCKEYMOORE CUMMINGS SPENT DOWN DEM SAVINGS: The new acting chairman of the Maryland Democratic Party alleges the organization was overspending without strong financial controls under the leadership of former chairwoman Maya Rockeymoore Cummings, who is now seeking her late husband’s seat in Congress, Luke Broadwater reports in the Sun.

OPINION: UNSAFE CONDITIONS AT PERKINS: In an op-ed for the Sun, forensic social worker Miriam Doyle opines on the lack of staffing at Clifton T. Perkins Hospital, calling it an unsafe and dysfunctional environment and writing that her patients face having groups canceled “because there isn’t enough security coverage, or because there aren’t enough nurses to dispense medication as scheduled.”

DIRECT DEPOSIT SNAFU FOR STATE WORKERS: The paychecks of 3,500 Maryland employees were not direct-deposited into their Capital One accounts on the Wednesday before Thanksgiving because of a routing number error on the bank’s part, state officials said. Colin Campbell of the Sun reports that Capital One informed the state comptroller’s office, which handles the payroll, that it was changing its routing numbers about two weeks ago. But when paychecks went out Wednesday, only 1,000 of the 4,500 full-time state government employees with Capital One accounts received their money.

OPINION: UNFAIR JUSTICE SYSTEM: In a column for the Sun, Dan Rodricks writes that “Gov. Larry Hogan’s decision to grant parole to three middle-aged prisoners serving life sentences was just, particularly because the men were all teenagers at the time of their crimes. But the governor’s action also highlights how unfair the system has been for close to three decades.”

RX POT INDUSTRY REPORT CARD: GOOD, CAN BE BETTER: In this “Report Card” for the Daily Record, Tim Curtis writes that “doctors, patients and those who work in Maryland’s medical cannabis industry say they are happy with the program’s development since its 2017 rollout – relieved that people can now access cannabis in a legal and safe fashion to help them cope with a range of illnesses and conditions, including chronic pain. Some in the industry nevertheless say there is room for improvement in how cannabis is prescribed and how cannabis patients are monitored.”

MARYLAND SEEKS TAX SUIT REVIVAL: The AP is reporting that four states – including Maryland – want a federal appeals court to revive their lawsuit challenging the federal tax overhaul that limited how much can be deducted in state and local taxes. New York, New Jersey, Connecticut and Maryland filed a notice of appeal Tuesday to ask the 2nd U.S. Circuit of Appeals to look at a judge’s rejection of their claims.

HOGAN ITCHING TO FIX STATE CENTER: Fixing the crumbling State Center complex in Baltimore was the itch Gov. Larry Hogan couldn’t scratch, an irritant that lingered from the time he took office in 2015 and that seemed poised to peeve him through his remaining time in office. Adam Bednar of the Daily Record writes that Hogan, who is preparing to start the second year of his final term, said on Tuesday the project’s been on his gubernatorial to-do list since he started residence in Government House. And he made it clear he was ready to scratch that itch.

WHY CONTRIBUTE TO NONPROFIT NEWS: Jennifer Preston, vice president for journalism at the Knight Foundation, explained the importance of funding local journalism on CNN’s Reliable Sources with Brian Stelter. She also described the NewsMatch grant program that is currently doubling contributions to MarylandReporter.com and over 200 other nonprofit news organizations. Click here to watch the 3-minute video. BTW, Brian started his media watching career at Towson University and is a graduate of Damascus High School.

LOBBY FIRM SUING FORMER CLIENTS: The association representing Maryland’s tort lawyers is asking a Circuit Court judge to dismiss a lawsuit against it filed by the group’s former lobbying firm, Bryan Sears reports for the Daily Record. In a filing in Prince George’s County Circuit Court, the Maryland Association for Justice claims that a mass exodus of lobbyists last fall from Alexander & Cleaver allowed the group to exercise its right to terminate a newly consummated contract. MAJ is one of six entities being sued by Alexander & Cleaver. The other five are Terrapin Pharmacy, McAfee, Maryland Vapor Alliance, Mid-Atlantic Renewable Energy Coalition and the Montgomery County Career Fire Fighters Association.

O’MALLEY VERBALLY ASSAULTS CUCCINELLI AT D.C. BAR: Laura Vozzella and Marisa Iati of the Post report that a liberal ex-governor walks into a bar, followed by a conservative Trump administration official. Instead of a punchline, what followed, one witness said, was a “shame-invoking tirade” by Martin O’Malley, the former Democratic governor of Maryland, directed at Ken Cuccinelli II, the former Virginia attorney general who is acting deputy secretary of the Department of Homeland Security.

OPINION: SHAME ON CUCCINELLI: Cuccinelli’s roots aren’t so different from O’Malley’s. His father’s people come from Italy, but his mother’s from Ireland. There, all comparisons end. Cuccinelli’s anti-gay, and he’s a climate-change denier – all antithetical to O’Malley positions, opines Michael Olesker in the Baltimore Post-Examiner. Also, Cuccinelli’s aligned with President Trump on the treatment of immigrants. …in other words, as a descendant of immigrants, Cuccinelli carries a special shame for such actions.

GARRETT TOWNS SUE OVER PFAs: Two Garrett County towns filed federal lawsuits against 3M Co. Tuesday, joining a growing list of plaintiffs from across the country that allege chemicals manufactured by 3M and other companies have contaminated their drinking water, reports Heather Cobun of the Daily Record.

POLICE CONTINUE TO WORK AFTER HARASSMENT CLAIMS: Rachel Chason of the Post reports that while a Mount Rainier police department investigation of claims of sexual harassment were found credible, the three officers involved left the department with clean records. Soon, two were working in nearby Seat Pleasant, whose police chief there said he was unaware of the allegations when he hired them. Experts say the clerk’s story offers a window into the challenges of proving officer misconduct, especially within small police departments, and the ease with which accused officers can move from one minimally staffed agency to another.

MANURE DIGESTER PLANNED FOR EASTERN SHORE: A Columbia company has announced plans to build what could be the first large-scale facility on the Delmarva Peninsula for converting poultry manure and other organic waste into energy, Timothy Wheeler reports in the Bay Journal. Bioenergy DevCo has struck a 20-year deal with Perdue Farms to take over its composting operation in Delaware with plans to expand that and build an anaerobic digester on the 220-acre site that will be able to treat 100,000 tons of manure and poultry processing byproducts a year.