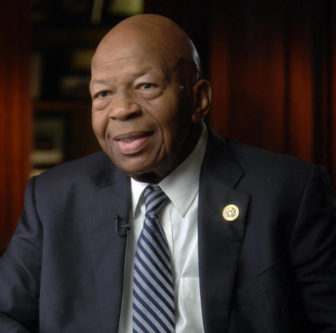 Elijah Cummings during an interview with CBS’s Steve Kroft in January 2019.

U.S. REP. ELIJAH CUMMINGS DIES: U.S. Rep. Elijah Cummings, a Baltimore Democrat, has died from complications of longstanding health problems early Thursday morning, his office said. He was 68 years old. The Democrat, known for his devotion to Baltimore and civil rights, and for blunt and passionate speechmaking, died at Johns Hopkins Hospital, reports Jeff Barker for the Sun.

REACTION TO CUMMINGS’ DEATH: The Sun compiles reaction from taround the state and country to Rep. Cummings’ death, including from his wife, Maya Rockeymoore Cummings, who is chair of the Maryland Democratic Party, former Baltimore City Mayor Kurt Schmoke and former RNC chair Michael Steele, who had been a Maryland lieutenant governor.

FILLING CUMMINGS’ SEAT: The Sun explains what happens when a seated member of the U.S. Congress dies during his or her term.

POST-UM POLL: SUPPORT FOR SCHOOL SPENDING BOOST: As Maryland lawmakers weigh revamping the state’s public education system, a Washington Post-University of Maryland poll finds widespread support for dramatically boosting school spending and an openness to higher income taxes to finance it. The findings could fuel a growing battle between Gov. Larry Hogan (R), who has vowed to fight any tax increases, and the Democratic legislative leaders who have made the costly education overhaul a top priority, Erin Cox, Emily Guskin and Rachel Chason.

KEY QUESTIONS ON KIRWAN FUNDING: Pamela Wood of the Sun answers fours key questions about the Kirwan education funding panel recommendations that the state of Maryland and county governments should spend $4 billion extra on public schools. This issue is expected to be debated in the 2020 General Assembly session and wrestled with by county leaders who will need to find more money for schools in their budgets. Topping the questions: What would the extra money pay for?

THORNTON ON KIRWAN: Josh Kurtz of Maryland Matters interviews Alvin Thornton, who had headed up an education commission similar to the Kirwan commission and now sits on the work group of the Kirwan commission as well. Of Tuesday’s funding vote, he says: When you see a consensus between Montgomery County and Baltimore City, between Montgomery County and Prince George’s County, and most of the smaller Eastern Shore counties, that’s a major step.

COMPENSATION PLAN FOR EXONEREES: Top Maryland officials pledged Wednesday to come up with a compensation plan by the end of the month for five men who were wrongly convicted and imprisoned for decades ? an action the state hasn’t taken in 15 years, Luke Broadwater and Pamela Wood of the Sun report. “The five individuals who were wrongfully convicted experienced unimaginable pain and indignities while incarcerated for crimes that they did not commit,” Gov. Larry Hogan told an audience gathered at the Board of Public Works meeting in Annapolis.

‘NO MAGICAL FIX’ FOR BAY BRIDGE TRAFFIC MESS: Rick Hutzell of the Annapolis Capital reports that Gov. Larry Hogan said Wednesday there is no magical fix for ongoing traffic congestion on both sides of the Chesapeake Bay Bridge caused by the start of a two-year, $27 million redecking project on the westbound span. Speaking at the Board of Public Works meeting in Annapolis, Hogan rejected calls by Comptroller Peter Franchot and others to delay the project and said the work must proceed in order to maintain the safety of the westbound span. It was built in 1972, 20 years after the eastbound bridge.

RX POT REGULATORS RE-REVIEW APPLICATIONS: Medical cannabis regulators will work with independent investigators to review top-ranking applications for 14 coveted cannabis business licenses — for the third time — as well as the process for awarding those licenses. Morgan Eichensehr of the Baltimore Business Journal reports that the Maryland Medical Cannabis Commission said it is taking this additional step in an effort to ensure an entirely fair and transparent licensing process, following concerns raised by some lawmakers and stakeholders.

BSO TACKLES FINANCIAL STABILITY: Management and musicians of the Baltimore Symphony Orchestra Wednesday grappled with how to improve the organization’s bleak financial future at the first work group meeting since a one-year contract was signed to resume performances in September, Louis Krauss for the Daily Record reports.

GOUCHER TO REMOVE 1921 RACIST DEED CLAUSE: Cody Boteler of the Towson Times reports that when Goucher College purchased 421 acres of land for about $150,000 nearly a century ago, the family selling the land inserted a clause into the deed of sale that the college is now removing: “No part of said land or premises shall ever be leased, sold, transferred to or occupied by any person of the African Race,” the deed of sale, dated 1921, stipulates.

OP-ED: COLLEGES MUST BE OPEN TO ALL VIEWS: In an op-ed for the Sun, Towson University professor Richard Vatz writes that higher education prides itself on two overarching values: supporting the marketplace of ideas and academic freedom. But there has been an increasing and unremitting effort to eliminate conservatives and conservative thought in the humanities and social sciences in the American. academy.