A mural honoring the McElderry Park neighborhood runs along a treeless sidewalk on July 29, 2019. McElderry Park has one of the lowest percentages of tree canopy in Baltimore. University of Maryland Photo/Timothy Jacobsen

By Dan Novak, Kaitlyn Hopkins, Ian Round and Sandy Banisky

Researchers know how cities can ease the impact of rising temperatures. For starters, they can replace some concrete and asphalt with grass and trees, cover tar roofs with reflective white materials, remove the hard pavement that contributes to flooding and substitute permeable surfacing materials that let water drain through.

Around the world, calls for action to address the climate crisis are becoming more urgent. Without bold action to combat global warming by 2030, the effects will be catastrophic, the United Nations has warned.

To blunt the impact of climate change, officials have proposed dozens of changes, from creating more pedestrian-friendly neighborhoods to banning foam containers.  But some neighborhoods, known as heat islands, will need added help because they already feel more of the harmful impact of global warming.

Heat islands tend to have more pavement and fewer trees to provide shade.  The households have lower incomes, cope with more chronic illnesses and make more calls for emergency medical help. Planners say these problems are the result of decades of discriminatory legal and financial policies.

Baltimore’s sustainability plan, produced by the Office of Sustainability, acknowledges the problems.

“Baltimore’s history of deliberate racial segregation has positioned people in unhealthy and inequitable circumstances, deeply affecting the well-being of many of our residents — as well as the social, economic, and environmental well-being of our city,” the introduction to the plan reads.

Some members of the Baltimore City Council have fought for cleaner air and more mass transit. Last year, the city sued 26 oil companies seeking damages for climate change. Oil companies are fighting the suit. And a law passed this spring would force incinerators to reduce nitrogen oxide emissions substantially.

Real fixes will require major changes in how city dwellers live, in the fuel they use, the transportation they ride and the neighborhoods they inhabit.

In 2012, Baltimore developed a Climate Action Plan, which set a principal goal of cutting greenhouse gas emissions by 15% below 2010 levels by 2020. Planning officials say they expect to meet that target, and earlier this year updated the goal to reduce emissions by 25% below 2007 levels by 2020.

Other objectives included reducing energy use in buildings, increasing recycling, promoting solar and other renewable energy and urging development near transit stops to promote the use of buses and light rail.

Sacoby Wilson, associate professor at the University of Maryland’s School of Public Health, said the fight against climate change needs to come not just from government, but from neighborhoods as well. Yet discussions of global warming have tended to focus on melting glaciers and endangered polar bears, creating “a connection gap,” he said, for people living in cities. 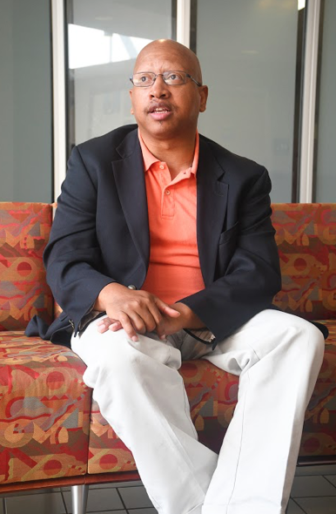 “Polar bears, saving penguins — that’s not proximal,” Wilson said. Instead, residents should hear about the impact climate change is having on nearly every aspect of neighborhood life, pocketbook issues from food to health to jobs.

Kristin Baja, a former climate resilience planner for Baltimore’s sustainability office who now works for the Urban Sustainability Directors Network, said plans are useful in providing city governments and residents with a work structure.  But cities can sometimes get caught in a “cycle of plan development,” she said.

“We need to shift from plan development to action,” she said, “and these plans need to be actionable and they have to be actionable with a wide range of partners that are not just city government.”

Del. Robbyn Lewis offers an example of volunteers doing for themselves.

She moved to a rowhouse north of Patterson Park in 2002, to a block that had two street trees.

Instead of waiting for the city to plant trees, Lewis and her neighbors made their own plans. The neighbors won grants, bought trees, got permits from the city, rented jackhammers and began breaking up the sidewalk. They carried the concrete chunks to rented dumpsters. Over the next few years, the volunteers had planted 400 trees in Southeast Baltimore.

Beyond roofs, cities can replace the asphalt and concrete that make up sidewalks and alleys with more porous materials. These permeable materials allow stormwater to trickle through and move more slowly, which reduces the chance that heavy rains will overwhelm storm drains and dump sewage and debris into the harbor.

Maryland recently adopted the Clean Energy Jobs Act, which mandates that 50% of the energy the state uses comes from renewable sources, such as solar and wind.

In Baltimore, some council members are urging more leadership on climate change. And Lewis, the delegate, said newer members of the state legislature also are dedicated to action.

Baja, the sustainability planner, says there’s no time to waste.

“Everyone has a responsibility,” she said. “Everyone needs to be taking action.”

University of Maryland reporters Leah Brennan and Danielle Kiefer contributed to this story.