Analysis: The data behind 90 days in Annapolis

The most efficient lawmaker by the numbers this session was Sen. Melony Griffith, D-Prince George’s, who passed 14 of 14 bills she introduced as a primary sponsor. Photo by Glynis Kazanjian for MarylandReporter.com.

By Daniel Oyefusi and Jake Gluck

Only 40 out of the 188 legislators in the Maryland General Assembly passed at least 50% of bills they introduced, and the average success rate for passing bills was 30.6%.

Ten lawmakers passed every bill for which they were the primary sponsor.

While some legislators were able to pass multiple bills, others struck out in their attempts and a few didn’t introduce any legislation.

Capital News Service gathered data from the 2019 legislative session and conducted an analysis to report on some of the most striking takeaways from the General Assembly.

Gov. Larry Hogan, R, must sign bills into law or let them become law without his signature, or veto bills he disapproves of. He has already completed four bill signings and his fifth is scheduled for Thursday.

Hogan vetoed some legislation during the session, including a bill to increase the minimum wage in Maryland to $15 per hour, but the Democrat-controlled General Assembly voted to override the veto.

Although the General Assembly has come to a close, Hogan could still veto some bills passed later in the session that he doesn’t agree with. The deadline for Hogan to veto bills is May 28.

The most efficient lawmaker by the numbers this session was Sen. Melony Griffith, D-Prince George’s, who passed 14 of 14 bills she introduced as a primary sponsor.

The freshman senator, previously a 16-year member of the House of Delegates, took on legislation — 11 at the request of the Joint Committee on Pensions, on which Griffith serves as the Senate chair — that primarily focused on adjusting the state’s pension and retirement system.

All but one of Griffith’s bills passed unanimously through the General Assembly. Griffith told Capital News Service she was surprised, but said the process of getting a bill passed is complicated.

Griffith mentioned “unintended consequences” of introducing legislation, which at times “creates more problems than it seeks to address.” A bill may attempt to correct one problem or update one situation, but could indirectly affect another, causing a domino effect of issues that must be resolved.

“People don’t know how long the days are,” Griffith said.

One sure way to get your legislation passed is to hold a leadership position.

Miller and Busch also introduced the most legislation of any lawmakers, with Miller at 52 and Busch at 50. The Senate President and House Speaker often introduce legislation at the request of the governor’s administration, or a state agency. This is typically done as a courtesy. 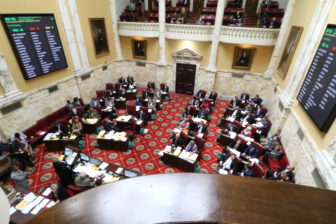 In the Senate and House of Delegates, 188 legislators introduced 2,497 bills, which includes 16 joint resolutions. Both chambers passed 866 bills, two of which were joint resolutions. Photo by Glynis Kazanjian for MarylandReporter.com.

A handful of legislators weren’t successful in passing any legislation, and Republicans — who are in the minority — fared the worst this legislative session. The four least successful lawmakers this past session were Republicans, led by Del. Neil Parrott, R-Washington, who failed to pass any of the 16 bills he introduced as a primary sponsor.

The nine-year lawmaker sought to enact legislation that included recognizing exposure to pornography as a public health crisis, changing the size of safety zones for archery hunting in Washington County and tightening election rules. Each of Parrott’s bills either received an unfavorable report or did not receive a vote in its committee. Parrott’s office did not return a request for comment.

Of the 20 lawmakers who passed the most pieces of legislation, only one Republican, Sen. Adelaide Eckardt, Caroline, Dorchester, Talbot and Wicomico, passed more than 10 bills as a primary sponsor.

Three lawmakers didn’t introduce any legislation as a primary sponsor: Delegates Jen Terrasa, D-Howard, and Debra Davis, D-Charles, both freshmen lawmakers, as well as Del. Jay Jalisi, D-Baltimore County, who was reprimanded by his peers after a report alleged abusive behavior by Jalisi toward his staff.

‘Freshman of the Year’

Griffith could claim the title of “Freshman of the Year” for this legislative session, but the first-term senator also previously served for 16 years in the House of Delegates.

The actual “freshman” first-time lawmaker who achieved the most success was Sen. Sarah Elfreth, D-Anne Arundel, who saw eight out of 10 bills she introduced as a primary sponsor pass. 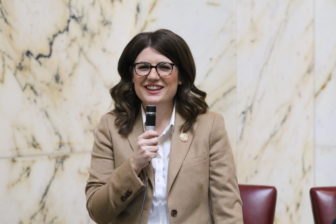 Her notable successes include bringing changes to the University System of Maryland Board of Regents and establishing Freedom of the Press Day.

Elfreth’s success was an anomaly for this session’s 61 freshman lawmakers, many of whom either didn’t see any legislation pass or introduce a single bill.

Which party was more successful?

The median number of bills passed by a typical Democrat lawmaker was three, compared to one bill by a typical Republican. The success rate for Democrats was also buoyed by the fact that the party holds a supermajority in the General Assembly.

The median number of bills introduced by a Democrat was 10, compared to 9 from Republicans.

Which legislators worked together the most?

A co-sponsor is an additional lawmaker or lawmakers, aside from the one or two primary sponsors, who sign on to voice their support for a piece of legislation. Capital News Service analyzed every co-sponsorship this session to find out which lawmakers supported each other the most.

The following legislators all had at least 15 co-sponsorships between and among them, the strongest relationships in the Senate. These relationships are often a result of the legislators’ common committees or districts. (See the accompanying graphics to learn how many bills each set of lawmakers shared.)

Senators Will Smith, Jeff Waldstreicher and Susan Lee are all Montgomery County Democrats, while Senators Jill Carter and Mary Washington, serve on the Judicial Proceedings Committee where Smith is vice chair. Sen. Antonio Hayes, like Carter and Washington, is a Baltimore City Democrat.

Miller controls the agenda for the Senate and Republicans, facing a supermajority, must work with the chamber president to get legislation passed.

Delegates Stephanie Smith and Nick Mosby are Baltimore City Democrats who serve on the Ways and Means Committee.

Busch — and now newly elected Speaker Adrienne Jones — controlled the agenda for the House. Republicans, facing a supermajority, must work with the House speaker to get legislation passed.

Del. Robbyn Lewis, D-Baltimore City, supported the most pieces of other lawmakers’ legislation by a wide margin. The two-year lawmaker co-sponsored 208 bills; the next closest legislator was Del. Joseline A. Pena-Melnyk, D-Prince George’s and Anne Arundel, who co-sponsored 143. Neither lawmaker introduced more than 10 bills as a primary sponsor.

Todd Eberly, professor of political and public policy at St. Mary’s College of Maryland, said the district pairings make sense because a lot of bills introduced are “county-specific.”

Eberly added that sponsoring bills within one’s committee increases the likelihood that it will eventually make it to a floor vote.

What’s on the agenda for next session?

Many bills were left untouched in the helter-skelter of Sine Die, the final day of the legislative session. One of the issues Eberly expects to be revisited in January 2020 is background checks on long gun sales. The House and Senate weren’t able to come to agreement on a revised bill ahead of the final day.

Eberly also expects a bill to allow patients to consider drug-aided death to make a return. The Senate version of the bill, sponsored by Smith, didn’t pass after a tied vote this year, but has gained momentum over the last few sessions.