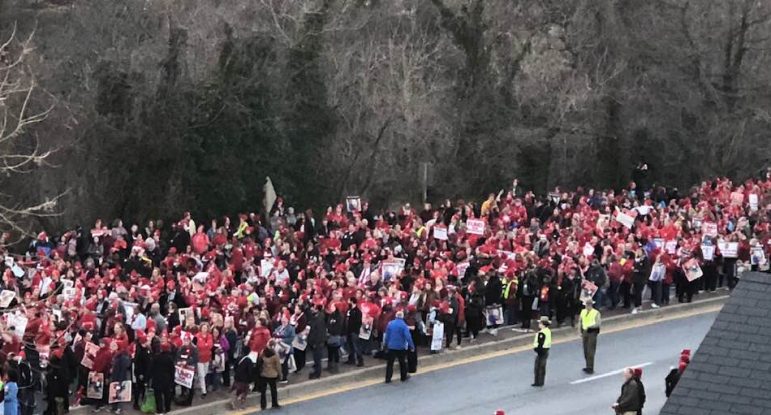 TEACHERS RALLY FOR ED FUNDS: Several thousand teachers, parents and students flooded Maryland’s capital Monday night, shutting down roads to rally for a dramatic increase in school funding over the next decade, Erin Cox of the Post reports. 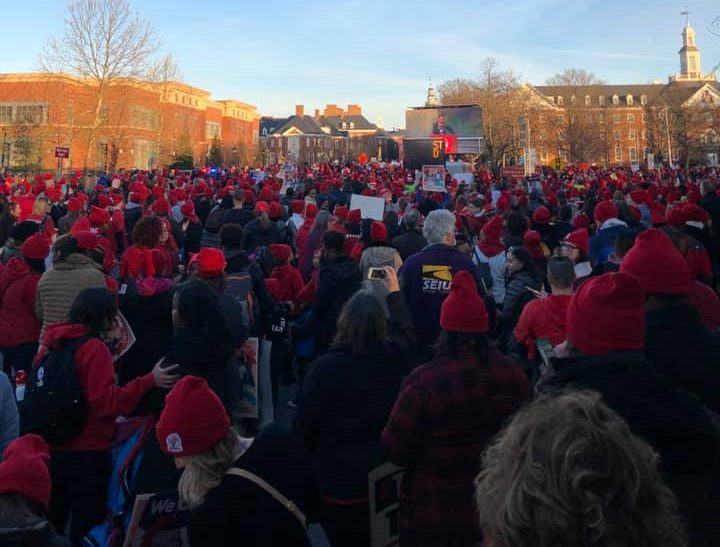 Stage was set up at end of Rowe Boulevard as construction blocks Balden Street. Facebook photo by Sarai Gray

OPINION: NOT A THREAT, A REMINDER: The editorial board for the Sun opines that Senate President Mike Miller bristled at the news last week that the American Civil Liberties Union of Maryland is seeking to reopen a decades-old lawsuit over the adequacy of state funding for Baltimore City Schools, saying “We don’t respond well to threats.” It isn’t a threat so much as it is a reminder that the state, by its own figures and reports, has never fulfilled what is required of it under a 25-year-old lawsuit related to city schools funding.

COMMUNITY PUSHES BACK ON JHU POLICE: Legislation to authorize a private police department for Johns Hopkins University may be sailing through the General Assembly in Annapolis, but its opponents in Baltimore are counter punching with gusto. On Sunday, three members of the 45th and 46th District delegations got a grilling from residents at a storefront church in East Baltimore, writes Mark Reutter for Baltimore Brew.

HANDGUN PERMIT REVIEW MEETING: Pamela Wood of the Sun attends a meeting of the controversial Handgun Permit Review Board, writing that it can be challenging to learn more about the board’s decision-making. Board members refer to applicants only by their application number. There are no microphones, making it difficult for the audience to hear exchanges between applicants and board members. On a unanimous vote, the board overturned seven cases where applicants were denied a permit, and dropped appealed restrictions of the six that brought those cases.

POPULIST ECONOMICS BILLS: Beyond the “Fight for Fifteen,” which has attracted plenty of publicity, there are multiple examples of bills that have been introduced this legislative session designed to create economic parity, help close the gender gap, and aid the working poor. And there are multiple explanations why there haven’t been so many in the recent past – and why that is changing, writes Josh Kurtz for Maryland Matters. .

OPINION: TIPPED WORKERS NEED RAISE: In an op-ed for Maryland Matters concerning the $15 minimum wage fight, veteran restaurant worker Drew Koshgarian seeks to explain the plight of being a tipped worker. “Working for tips is like gambling,” he writes. “Currently, the minimum wage for tipped workers in Maryland is $3.63 and the restaurant industry is working hard to keep it frozen at that poverty rate.”

‘X’ GENDER LICENSE SPONSOR UPBEAT ON BILL’s CHANCE: The Montgomery County sponsor of a bill that would allow drivers to designate their gender as “X” on their license said Monday she is optimistic that the legislation will pass after it received a favorable report in a House of Delegates committee, Dan Schere of Bethesda Beat reports.

OPINION: STILL NO SOLUTIONS FOR PUBLIC SCHOOLS: The editorial board for the Post concludes that Maryland still has no clue on how to fix public schools, opining that the “commission studying public education gets credit for courageously facing the truth about the quality of schools in the state. … Unfortunately … the commission was not nearly as daring when it came to remedies. Instead it opted to embrace the same old formula of more school spending, which has proved to be ineffective.”

OPINION: FRANCHOT AS CHAMELEON: In his Political Maryland blog, columnist Barry Rascovar looks back on the long, liberal career of Peter Franchot and concludes he “has changed his political colors so many times in the past two decades, he’d make a chameleon blush. Then again, maybe he hasn’t. . … As comptroller, Democrat Franchot has jumped ship, steering so far to the right he’s now best buddies with conservative Republican Gov. Larry Hogan.”

SCHOOL BOARD REFUSES OLSZEWSKI REQUEST FOR COPY OF AUDIT: The Baltimore County school board recently turned down County Executive Johnny Olszewski Jr.’s request for a copy of an audit of county school finances and contracts, Liz Bowie of the Sun reports. Amid questions about technology contracting and ethical issues last year, state legislators and the county council demanded the audit, which the school board subsequently ordered. A draft of that audit was delivered to the school board chair Jan. 18.

REDISTRICTING PUBLIC HEARING TODAY: The public is invited to weigh-in on new proposed boundaries for the 6th and 8th congressional districts today, reports Samantha Hogan for the Frederick News-Post. Gov. Larry Hogan’s (R) Emergency Commission on Sixth District Gerrymandering will host its first public meeting to review and hear criticism of its proposed map, which may be used in the 2020 presidential election. The map returns Frederick County completely to the 6th District along with the southern half of Carroll County and northwestern Montgomery County.

HOGAN FILES BRIEF ON 6th DISTRICT: Gov. Larry Hogan has filed a brief jointly written with former California Gov. Arnold Schwarzenegger with the U.S. Supreme Court, seeking to back up the claims of Maryland residents who argue the state’s 6th Congressional District was unconstitutionally gerrymandered, the Sun’s Pamela Wood reports. The brief argues that when districts are drawn to favor one party over another, it results in elected officials who “often hold far more extreme views than the citizens they represent.”

STATE JOBLESS RATE DROP TO 3.7%: Maryland’s economy continued to add jobs steadily in January, enough to push the state’s unemployment rate to the lowest it’s been in about 11 years. The 3.7% unemployment rate was lower than the national rate of 4%, allaying fears about the harm from a weeks-long partial government shutdown in a state so dependent on government work and contracting.

HOGAN PREZ WATCH: Luke Broadwater of the Sun writes that Gov. Larry Hogan will travel to New Hampshire after the end of the General Assembly session in April to speak at an event that bills itself as a “must stop” for presidential hopefuls.

TRUMP SLASHES 90% FROM BAY PROGRAM: President Donald Trump proposed a record $4.7 trillion federal budget for 2020 on Monday, which increases military spending while making historic cuts to domestic programs. The Sun’s Christina Tkacik reports that troubling to Maryland environmental advocates is a 90% cut to funding for the Chesapeake Bay Program, which they say has been an essential tool for the estuary’s recovery in recent years.