After a comprehensive law overhauled the state’s criminal justice system, Maryland has seen a decline in the state’s prison and jail populations and more streamlined treatment for addicts who are charged with crimes. But advocates want to add to the law to keep inmates from returning behind bars.

Signed into law in 2016, the Justice Reinvestment Act is a criminal justice system reform that focuses on increasing supervision and treatment and decreasing incarceration rates in Maryland prisons.

Described by Sen. Bobby Zirkin, D-Baltimore County, as the “most comprehensive reform” he’s seen while serving in the Senate, the law has significantly reformed many criminal justice policies since becoming fully effective on Oct. 1, 2017. But some of its provisions are up for review by the legislature.

It also places caps on maximum sentences for nonviolent offenders who violate probation on a technicality.

About 700 inmates have been screened for administrative release since the legislation went into effect, with 21%, or 147 inmates, being found eligible. Of those, 60% have been released and the rest are fulfilling their minimum length of stay, according to a report from the Governor’s Office of Crime Control and Prevention.

The law also emphasizes treatment over incarceration for individuals struggling with addiction and has sparked a drastic drop in wait times for psychiatric beds.

With the Justice Reinvestment Act’s new 21-day deadline adding pressure, average placement times dropped to just 10.6 days for the 788 individuals placed in treatment in fiscal year 2018, according to the report from the Governor’s Office of Crime Control and Prevention.

For those returning to life outside the correctional system, the law states that the Department of Public Safety and Correctional Services must issue a certificate of rehabilitation to specified individuals.

Professional licensing boards then can’t deny occupational licenses or certificates to former convicts solely based on the fact that the individual had previously been convicted of a crime.

But for some individuals, return to life outside is complicated by how the state categorizes and links related charges.

Under the Justice Reinvestment Act, expungement is permitted after 10 years of good behavior, including any parole, probation or supervision, for misdemeanor charges.

After 15 years of good behavior, expungement is permitted for second degree assault, felony theft, intent to distribute controlled, dangerous substances and burglary in the first, second and third degrees.

Before the law was enacted, only nuisance crimes such as public urination or other activities not normally done in public were eligible for expungement.

However, HB13, sponsored by Del. Erek Barron, D-Prince George’s, seeks to repeal that provision, and would authorize a person to file a petition for partial expungement of certain criminal records under certain circumstances.

The bill, previously introduced in the 2017 General Assembly, has been a topic in the legislature since 2012. The Senate version, SB238, is scheduled to be heard in the Senate on Thursday.

Alphonso Smith of Baltimore wrote to lawmakers this year that he has been working at the Maryland Transit Administration as an operations instructor for 20 years. He submitted written testimony that he is an ex-offender, and described the 34 years following his conviction, which he did not detail, as “somewhat successful.”

“There are many limitations and road blocks in place due to prior, non-expungeable convictions preventing any further advancement in law enforcement, child care and many other career paths,” he said Jan. 22 in a written testimony supporting the bill.  He added that the bill’s passage would clear a path for himself and others to begin the expungement process and to advance in his career without convictions weighing them down.

Along similar lines, HB19, sponsored by Del. Cheryl Glenn, D-Baltimore, seeks to authorize individuals to file a petition for expungement if the person was convicted of a nonviolent crime.

Even if a charge receives a non-criminal disposition, under the Justice Reinvestment Act, if it’s in the same unit of charges as a criminal one, it can’t be expunged.

“Even when they understand these differences, employers often draw negative impressions about job applicants who have been involved with the criminal justice system, regardless of case outcome,” Barnes stated in his written testimony supporting HB13.

Another factor to consider is race, Barnes said. Black residents make up 28% of the state population, yet they comprise over 70% of the people imprisoned.

With higher conviction rates for persons of color, these individuals face exclusion from the job market, challenges finding stable housing, and other cyclical problems affecting communities of color, according to testimony from the American Civil Liberties Union of Maryland.

Ex-offenders who are employed are much less likely to commit new offenses than those who are unemployed, according to a 2017 Greater Baltimore Committee report that described employment as the “single largest determinant of re-arrest and reconviction.”

Law enforcement officials generally oppose legislation that increases categories for expungement because it could interfere with access to prior criminal information and be a safety factor for law enforcement personnel, according to written testimony from Chief David Morris of the Maryland Chiefs of Police Association and Sheriff Darren Popkin of the Maryland Sheriffs’ Association.

Technological roadblocks are also a reason for opposition, according to representatives of the Maryland court system.

Each charge is also assigned an individual number for each case. If a partial expungement is granted for one charge of a two-charge case, the system can’t renumber the charges to appear as if only one charge exists, according to written testimony from a Maryland court system representative.

“A missing numbered charge could raise more questions and red flags, therefore, nullifying the purpose of the expungement,” the Legislative Committee of the Maryland Judicial Council, the main policy advisory body to the Chief Judge of the Court of Appeals, said in written testimony opposing the bill. 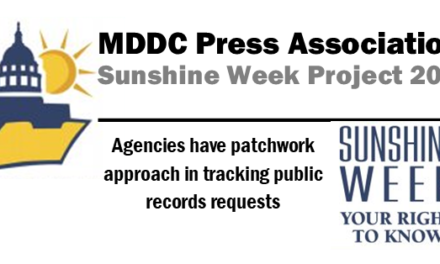